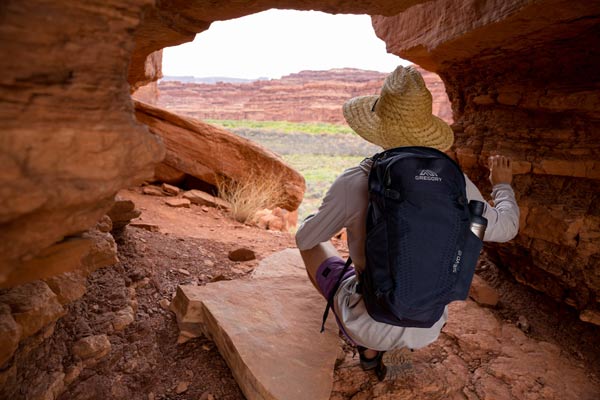 Guests Who Go For It, Despite Not Knowing A Soul on the River…Yet 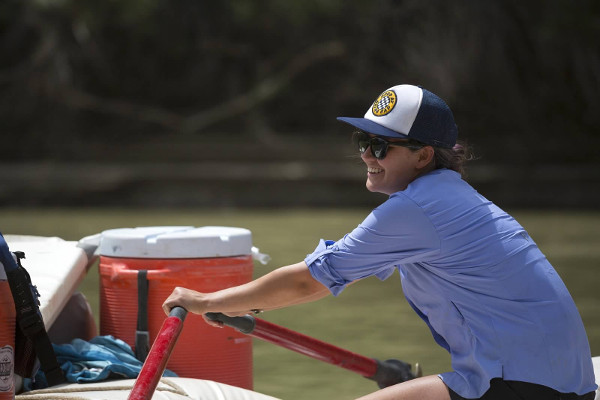 “Live life without regrets.” That has been my simple mantra for several decades now, but not before I already had a muddled collection of “should-would-and-could haves.” Some regrets just bite you in the butt when you’re not looking; you didn’t even see them coming. There are others though, that stare you down, daring you to pass up the opportunity, adventure, gesture, risk, challenge, and then live with the “what if” from that point on.

The regret that haunts me still is the chance I had to travel around the world. I had no strings attached (no mortgage, kids, job, or boyfriend to lose), money in my pocket from an insurance reimbursement (my car had been stolen and stripped beyond repair), and I was at a crossroads in my life (no mortgage, kids, job or boyfriend to lose). Why did I turn down such a “perfect storm” opportunity to purchase a one-way, 6-stop-ticket around the world? I didn’t want to go for it alone. That and my parents would have freaked.

Though it takes more guts, going solo is sometimes the most rewarding way to travel. There is a heightened awareness of your own inner workings and time to recline in your thoughts. There is freedom also in being undefined by whomever you are traveling with— exhilaration in anonymity. John Muir said: “Only by going alone in silence, without baggage, can one truly get into the heart of the wilderness. All other travel is mere dust and hotels and baggage and chatter.”

Plenty of Holiday guests already know this. I spoke to a handful of them who refused to miss out on something they needed or wanted to do because of the fear of going alone.

If I had spoken to Sandra Bray so many years ago, I might be flipping through a photo album of worldly adventures. “I don’t mind going by myself because along the way everyone else becomes friends,” says Bray, who takes Holiday River Expeditions trips whether friends are available or not. She recalls her San Juan River trip this summer, “In very short order, the people on the trip became friends, and then I was no longer alone.”

An avid desert landscape fan, Anne Campbell craved a river trip that would take her into the heart of the desert, where no roads go. Admittedly a “shy person” and nervous about going alone on her first river trip, Campbell clambered on board for a Colorado River Rafting trip ride last June, one of the most intense high-water months ever. “I would have regretted it enormously if I had not gone; I would have been giving up an opportunity to be in my favorite part of the country,” expresses Campbell. 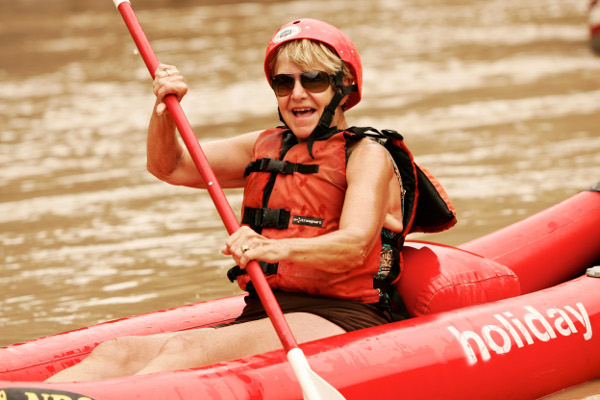 She mentions the little gestures and natural pattern of Holiday River Expeditions’ trips that encourage camaraderie and social ease. Holiday guides are on board not just for their river skills but because they are outgoing and interested in people. Like hosts at a party, they encourage the social dynamics and keep an eye on everyone. “They encouraged people to gather around before meals, setting up chairs in a half-circle around a fire, and offering appetizers each evening,” recalls Campbell, noting that guests shared wine or special treats with the group that they had brought along. Struggling with her tent the first night, several guests offered Campbell help—“of course the guides would have done it in a heartbeat, but I wanted to do it myself and eventually I got it.”

“You become your own tribe,” says Virginia Gebhart, who rode the Yampa River this June and arrived solo. For her, this was a trip that had been put on hold 25 years ago when her father suddenly passed away; she was back to complete it in memory of her father and “to run away from life for a while.” Like so much traveling and removal from what is familiar, it is an evolutionary journey within as well. People seek out beauty and adventure on these trips, but many also seek out clarity and peace from the clutter of their lives.

“If you don’t do a river trip solely because you are afraid to do it alone, you’ll miss out on so much in life—not just this trip but on many rich experiences,” says Gebhart. Several rookie solo travelers on Holiday River Expeditions trips mentioned they were encouraged to travel more on their own now. “It’s empowering,” admits Campbell, referring to the action and the energy of the people she met.

“I could have not gone,” muses Campbell, but the pull of the desert and the push of realizing she might be setting herself up for more regrets if she let fear hold her back made her move forward. “I’m at a point in my life that I want to be growing and exploring, not sitting and feeling isolated and restricted—I know I could isolate easily and I don’t want to do that.”

Have you taken solo trips before? What did you get out of it—for better or worse—from setting off on it alone? Share your tales, caveats, and encouragements of why it is or isn’t worth it.