We are not currently accepting reservations for the Full Canyon San Juan trips for the 2023 season. Once Mother Nature gives us a better idea of possible water flows for this section we will reevaluate. Check back in early March! Or you can book the 3 day Upper Canyon which is runnable in lower water conditions.

The San Juan River is one of the steepest and fastest-moving rivers in the United States. With an average drop of eight feet per mile, it’s steeper than the average gradient of the Colorado River in Grand Canyon! Although steep, its rapids are relatively mellow. This makes the San Juan a great place for families, inflatable kayak enthusiasts, and first-time river runners. Archaeological sites from ancient pueblo civilizations and recent Diné (Navajo) People abound in the upper canyon. Add in the stunning exposures of Colorado Plateau geology that dominate throughout, and this trip keeps you enthralled. Visiting the River House ruins and rafting through Comb Ridge and the famous Goosenecks of the San Juan are particular highlights.

The San Juan is also where commercial river running was born. Norman Nevills began operating scenic float trips from Mexican Hat through Grand Canyon in 1938. This river is also especially known for the phenomenon of sand waves. Shifting sand on the bottom of the river creates waves that migrate upstream until they collapse under their own weight. These large but mostly harmless waves make for a particularly thrilling ride in an inflatable kayak. Five-day trips give you the best of both worlds: the archaeology of the upper canyon and the wilderness of the lower.

“A river trip offers families the opportunity to see stunning landscapes and to re-connect with children and adults of all ages. There is nothing electronic, just the natural environment, conversations, and sunshine. It is simply magical.” (Andrew and Leigh Ann Morse)

Read more: The Insider’s Guide to Floating the San Juan River in Utah

Acknowledging the Indigenous inhabitants of the San Juan River. In an effort to end the erasure of the traditional inhabitants of this land, Holiday acknowledges the Núu-agha-tʉvʉ-pʉ̱ (Ute), Southern Paiute, Diné (Navajo), Hopi, and Pueblos people, who have lived along the San Juan since long before this continent was colonized. You can learn more about our land acknowledgements here.

We are not currently accepting reservations for the Full Canyon San Juan trips for the 2023 season. Once Mother Nature gives us a better idea of possible water flows for this section we will reevaluate. Check back in early March! Or you can book the 3 day Upper Canyon which is runnable in lower water conditions.

The San Juan River snakes its way through the Four Corners, etching a rich, green line through the red desert landscape. We’ll join it on its westward journey at Sand Island, just outside of Bluff, Utah. The river flows through the colorful uplifts of Comb Ridge and the Raplee Anticline before passing through the town of Mexican Hat, Utah. Beyond that, it drops into the deep, entrenched meanders of Goosenecks State Park. Our take out is at Clay Hills, where the San Juan begins to slow as it meets the still water of Lake Powell.

The night before your trip:

We’ll meet at the Arch Canyon Inn in Blanding, Utah, for a pre-trip meeting at 7:00 p.m. (Mountain Time). Pick up your dry bags and meet your guides and fellow passengers. This meeting lets us take care of all the final details so that we can get on the river that much faster the next morning.

Meet back at the Arch Canyon Inn this morning, where we’ll hop into our vans and travel for 45 minutes to the Sand Island put-in. Spend the day encountering archaeological sites representing five distinct cultures of indigenous peoples. See pictographs, petroglyphs, and hand-hewn steps in the canyon walls. Investigate elegantly designed Ancestral Puebloan ruins before descending through Comb Ridge. With plenty of choices for campsites, we’ll have gorgeous canyon views as we settle into river life tonight. Consider resting with your toes in the water, or start up a game of ammo-can tug-of-war with you family. Dinner will be ready shortly!

Mornings on the river start early – but you don’t want to miss the sun creeping its way down the canyon walls anyways. After an impressive first coffee and breakfast on the river, w’ll be on our way. Pass through the settlement of Mexican Hat, then wave at visitors on the rim of the Goosenecks, hundreds of feet above. Climb up to Mendenhall’s cabin, home to a determined gold prospector in the late 1800s. Camp at the foot of the Honaker Trail, another relic from the gold rush in 1892; hike up before dinner for an unforgettable view of the river canyon and Monument Valley. Fall asleep looking for summer constellations.

Small rapids and soaring walls are on tap this morning. Choose to float silently as a group, letting all of your senses come to life and open to the essence of the canyon. Take a ride through Ross Rapid and roll into camp in time for lasagna dinner at our very own river-front restaurant – no table reservations needed!

The biggest rapid of the trip, Government Rapid, will get our morning going with a splash. We’ll lunch at Slickhorn Gulch, one of the most celebrated side canyons along the lower San Juan. Be sure to scrub off in the river before hiking to the secluded, lush swimming hole—sunscreen and other oils disrupt the fragile ecosystem of the freshwater pool. After plenty of playtime, we’ll make our way to set up camp for a final camp circle evening of dinner and stories.

The canyon walls begin to descend around us until we are surrounded by smooth, golden Cedar Mesa sandstone. We may explore Oljeto Wash and play in the mud at its mouth before pushing on through the sandbars and riffles of the lower canyon. Our vans await at Clay Hills, our take-out, and we’ll wave farewell to the river as we climb out of the drainage and across the rugged topography of the Monument Upwarp, back to Blanding, Utah, between 4:00–5:00 p.m.

Please keep in mind that this is a sample itinerary. Your trip may include different hikes and attractions – there’s so many to choose from. This is meant to provide one possible example of how you may spend your time. Five days gives you plenty of opportunities to see all sorts of interesting things. We invite you to embrace the expeditionary nature of a river trip in the wilderness and arrive with an open mind and a willingness to go with the flow! 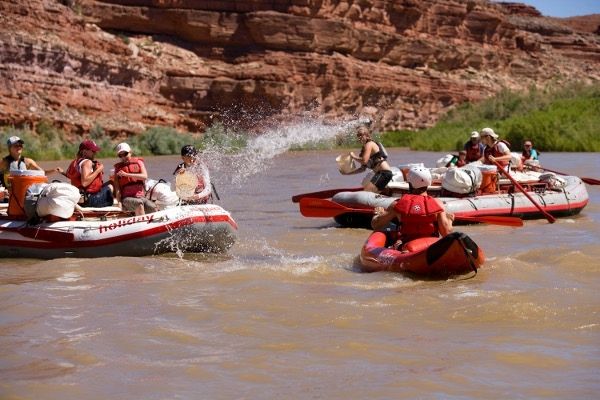 This sample itinerary outlines some of the things you may see on your trip. Every trip on the San Juan will be a little bit different, depending on water flows, available campsites, the interests of your group, weather, and other factors. Like any trip into the wilderness, being flexible is key. It’s why our motto is “go with the flow”!

The trip was way beyond anything I could have expected – I felt like royalty. I hope the guides get treated with the respect they earn and have enough of a break between trips, because they are seriously impressive and do a fantastic job.

Holiday was incredibly well put together and every guide was super knowledgeable! Gear was on point! It was all seriously so awesome! Activities were super fun, the food was totally unbelievable, and the guides were all so awesome and fun! Best guides ever! The whole trip was absolutely amazing. The San Juan was super tasty, the weather was absolutely choice, the food was SO good I still cant believe it. Best trip ever! See you next year!

First, the guides were great, professional, friendly, and knowledgeable. They were always ready to help (especially Katie) and offered safe advice for rafting. It was a very fun and exciting trip.

The guides were exceptionally friendly, competent, and good cooks. I was worried about the bathroom situation and that only one would be available for 25 people. Somehow it all worked out, primitive though the Banyos appeared to be. I was the oldest member on the trip and felt like the youngest. No cares, no worries. Every need was met before I even knew I had a need. I was a bit disappointed in the condition of the San Juan River. Quite silty and not conducive to swimming and bathing. the last two days of the float were really a row for the guides. On the last day, they continually had to row back and forth across the river to avoid large mud fields. More work for them. Less enjoyment for us.

Karen was very polite and helpful in helping me select the best option for my first river raft trip. Total neophyte to river rafting and more than 40 years since I camped as a scout, but this trip was as easy as I could have hoped for. I'm still in utter awe of how hard Sarah and Eve worked to make our trip as effortless as it was!
Obviously the guides were amazing, but so was the food, campsite, kayaking, and fellowship with other campers and the guides. Even sleeping on the air mats was pretty good. It was hot so you started out on top of the sleeping bag and crawled inside at some point in the night when the temps dropped.
At 2 AM the stars are amazing as I believe this is designated a dark sky area. Amazing campsites you will only believe if you take the trip! I took (and will share ) pictures so people would believe me. We had a 5 year old child with one of the families. The guides entertained this 5 year old better than I could imagine. The little girl was as cute as pie, but still, guides do their work for 15 hours a day and entertain her? 6 stars. I was pretty concerned about the 100 plus heat, but no problems with that since the river was 60F! 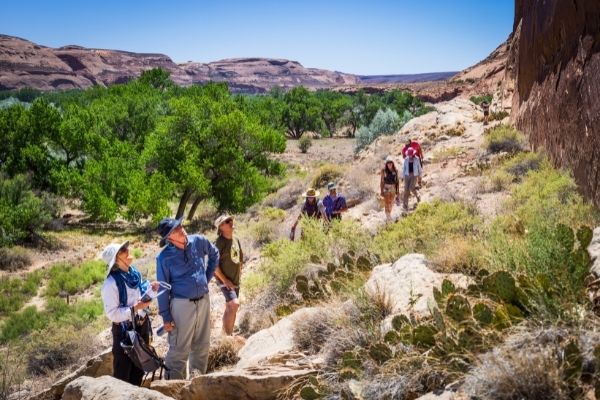 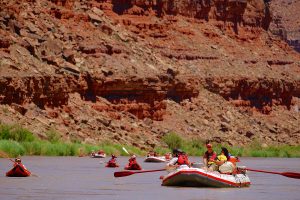 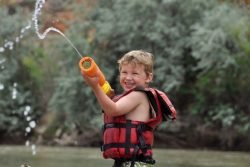 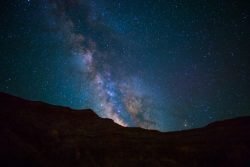 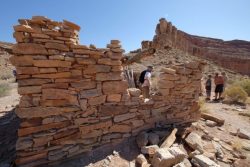 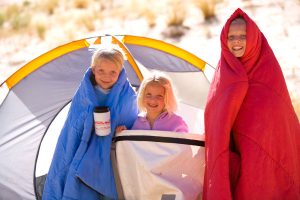 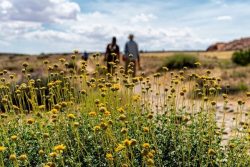