You’ve heard of Zion, Bryce, Canyonlands, Arches, Dinosaur, and Capitol Reef National Parks. But how about the San Rafael Swell? Smack in the center of Utah, this is Utah’s best National-Park-That-Isn’t. The Swell encompasses over 2,000 square miles of public lands connected by dirt roads and trails, with slot canyons, mountains, buttes, mesas, and arches just waiting to be explored. There are even a couple of rivers! Guided mountain biking tours through the San Rafael Swell are highly customizable. Each day can be as challenging or as easy as you want. Bike one day and hike the next. Tackle some rugged single track or spin along scenic graded roads. Just a few hours south of Salt Lake City, the San Rafael Swell’s red and white canyons are your sanctuary from the everyday grind.

Biking in the San Rafael Swell will take you back in time to old uranium mining camps and turn-of-the-century homesteads. Stop to explore cowboy camps and prehistoric Native American rock art. Ride above the San Rafael River and around the the Wedge, Utah’s “Little Grand Canyon”. Hike through Chute and Crack Canyons or ride the spectacular “Behind the Reef Road”. Our support van and professional guides will be with you every step of the way, adding a touch of luxury to your backcountry adventure. This is truly one of Utah’s best (and least known) treasures. Mountain biking the San Rafael Swell will be a trip you won’t forget.

Learn more about the Swell in our Insider’s Guide!

Green River, Utah: Things to Do and Places to Explore

“What a great group of people. We started as a group of strangers and by the fourth day we were all friends. The riding was more challenging than I expected but fun and gave us a great sense of accomplishment. The guides fed us like kings and every morning made sure our bikes were ready to roll! I cannot imagine going with anyone else. The overall experience was five stars.” (Steve and Liz Perth)

The San Rafael Swell is a part of the expansive traditional homelands of the Núu-agha-tʉvʉ-pʉ̱ (Ute) people. It is with deep respect and gratitude that Holiday acknowledges the Indigenous people who lived in and cared for these lands long before we arrived on this continent. We invite you to read more about our land acknowledgments initiative here.

The Oct 11-14 trip is also a Stargazing trip! See the description HERE

The Oct 11-14 trip is also a Stargazing trip! See the description HERE

The Swell is 2,000 square miles of colorful canyons and wide open spaces, right in the middle of Utah. Its eastern boundary is the San Rafael Reef, a jagged line of rocky teeth jutting out of the Green River Desert. Interstate 70 cuts straight through this reef, rising nearly 3,000 feet in 30 miles. To the west, the Swell rises even further, merging with the Wasatch Plateau and Boulder and Thousand Lake mountains. The northern portion of the Swell is defined by the San Rafael River and Cedar Mountain. To the south, the landscape descends into a labyrinth of slot canyons and rugged trails.

Please note: this is just one possible itinerary for a four-day bike trip in the Swell. There are several different routes we could plan, depending on the interests and abilities of the group.

The night before your trip:

Meet us at Holiday headquarters in Green River, Utah, (7:00 p.m., Mountain Time). We’ll do brief introductions and an orientation, open our store so you can buy any last minute items (see our packing checklist for items we stock), and do a thorough pre-trip inspection of your bikes. If you plan to bring your own bike, please make sure that it is in good shape. We strongly suggest getting it serviced by a professional shop prior to the trip. Guests with bikes that don’t pass our safety inspection will be asked to rent a Holiday bike for $205.00/person.

It’s a 45-minute van ride west on I-70 to the Head of Sinbad exit. Warm up with an easy ride along a dirt road that passes under the highway and through rolling grasslands. Our first stop is at a 4,000-year-old pictograph panel, hidden among the juniper trees at the base of a massive cliff. Ride south back under the highway and stop for lunch at a second pictograph panel. In the afternoon we’ll visit Swasey’s Cabin, an old homestead site. Choose to add a five-mile (round trip) ride down to Eagle Canyon Arch, or pick one of two ways to climb up to our first night’s camp below Family Butte.

Watch the sunrise over Reds Canyon, then ride down into its warmth. A long descent this morning, with a side trip to the Lucky Strike Mine. End up at the Muddy Creek, which may or may not have water in it. Eat lunch under a huge cottonwood tree and admire the Hondu Arch high above. What goes down must go up: we’ll ride back up out of Red’s Canyon along a steep but well-graded dirt road and then out to our campsite on the edge of the world. Eat a well-earned lasagna dinner while staring out at Temple Mountain, the San Rafael Reef, and three different mountain ranges!

Ride downhill toward Temple Mountain. Take the easy road down or opt for the more technical 4×4 route. Either way, we’ll end up on the Behind-the-Reef Road. Set up an early camp at the head of Chute Canyon and spend the afternoon hiking through its shady confines.

Opt for a leisurely morning and an easy ride back out to Temple Mountain and the Temple Wash pictograph panel. Or squeeze in another quick hike in the next slot canyon over, or explore more of the Behind-the-Reef Road before riding out to pavement. Enjoy one last gourmet lunch together before our passenger van arrives to drive us the hour and a half back to Green River. Our expected time of arrival back at our headquarters is 3:00 to 4:00 p.m.

Please keep in mind that this is just a sample itinerary. The biggest advantage of our San Rafael Swell mountain biking trip is the flexibility of the daily itinerary and the nearly limitless options for riding and hiking. The Swell is known for its spectacular scenery and abundance of dispersed camping sites. Old mining roads and ATV trails offer the ultimate opportunity for a “choose your own adventure” kind of trip. Weather, campsite availability, and the need to be courteous of other groups can also affect our itinerary. 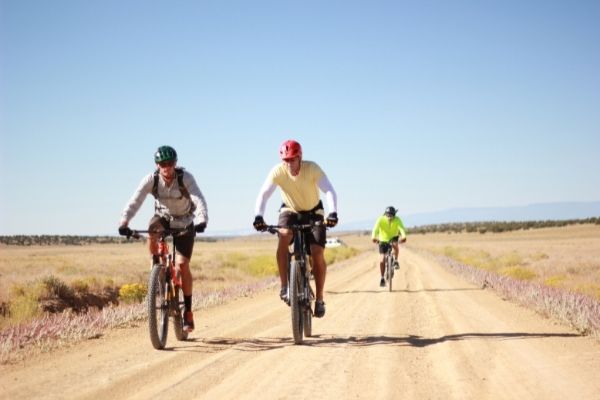 The San Rafael Swell offers everything from graded, two-wheel-drive dirt roads great for scenic spinning to technically challenging double and single track routes designed for ATVs and mountain bikes. These trails may consist of packed dirt with gentle up and down sections; loose rocks and gravel; sand; ruts; winding or steep turns; technical ascents and descents, including ledges, exposure, or slickrock; and steep uphill and downhill sections.

The San Rafael Swell biking trip can be customized based on the interests, ability levels, and desires of the group; however, riders with no previous off-road bicycling experience should be experienced road cyclists with good athletic ability. All riders should prepare for the trip by riding their bike on a regular basis prior to the trip.

Everything was fantastic! Susan and Rachel were exceptional guides, chefs, and hosts. I would recommend a mountain bike trip to anyone wanting to discover a new area.

Dustin & Justin were great guides. They made the experience wonderful and accommodated different skill levels with patience and encouragement. The food was great quality and prepared well. I would definitely recommend them to anyone interested in a guided adventure trip.

Guides are absolutely the BEST!!!! Yet again, Holiday facilitated a fantastic experience. The beauty of the landscape is a given, but your amazing guides always give the trips that extra special something. Oh! And the food is great too!

What a great group of people. We started as a group of strangers and by the fourth day we were all friends. The riding was more challenging than I expected but fun and gave us a great sense of accomplishment. They fed us like kings and every morning made sure our bikes were ready to roll! I can not imagine going with anyone else. The overall experience was five stars. 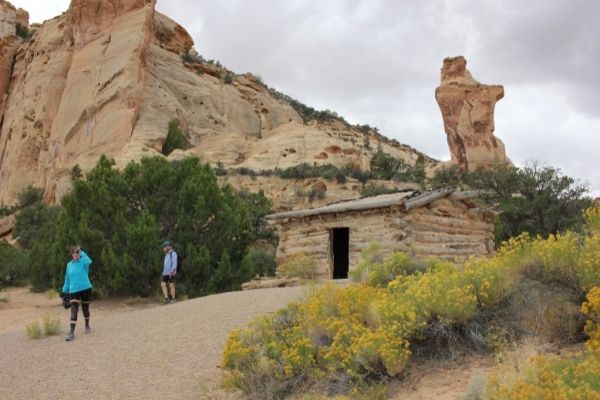 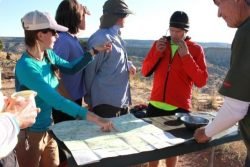 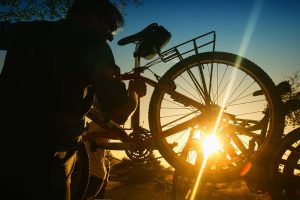 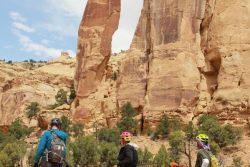 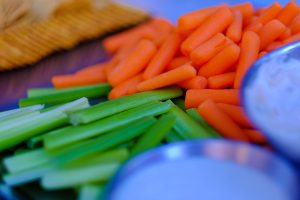 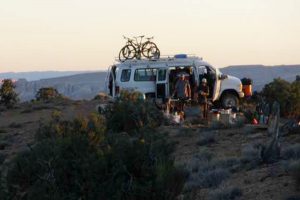 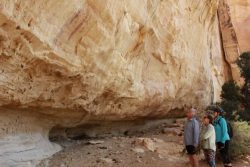