The Best Ways to Make Coffee on the River 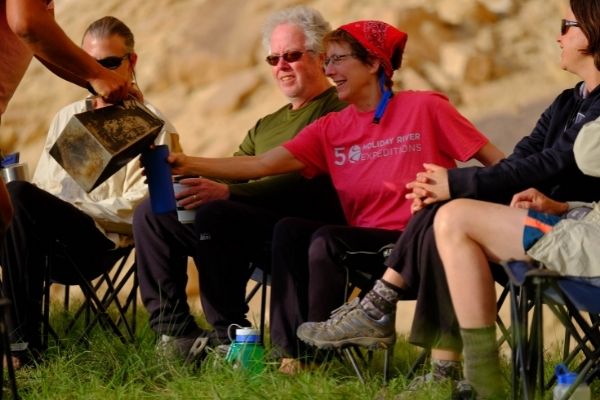 Life on the river quickly becomes a series of intentional rituals; tying the bowline to a sturdy tree, drying out wet layers in the sun at camp after an exhilarating day on the water, and rigging everything onto the raft in a calculated game of Tetris. However, one ritual stands out that has withstood the test of time: morning coffee. 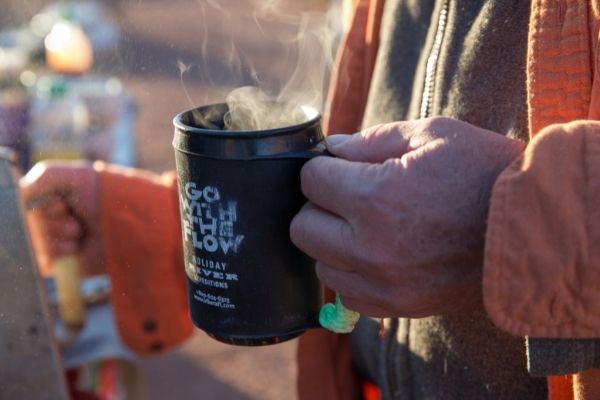 The coffee ritual served river runners long before rafting became a relaxing vacation. Historian Roy Webb said that when John Wesley Powell and his crew were all but starving towards the end of their 1869 expedition on the Green and Colorado Rivers, Powell wrote in his journal: “but we have a large sack of coffee!”

If you’re not an early riser (like me,) the cue to finally crawl out from a cozy sleeping bag is the call following the low growl of the blaster heating water: “HOT COOFFFFEEEEE!” Those simple two words are the first rallying cry of the day; a second to pour a warm cup of coffee in your mug and sit for a moment to reflect before the activities start. Coffee (or tea for that matter) is more than an indulgence, it is a formality that forces us to slow down and greet the river and new day with a sense of calm.

The how to of the brew:

While the act of coffee drinking after waking up on a sandy beach hasn’t changed much over the years, ways in which to brew the best cup of joe certainly have. Roy Webb went on to describe the way in which John Wesley Powell made coffee as “to put the beans in a frying pan, grind them with a rifle butt, and then throw them into a kettle.”

To figure out the best ways to make coffee on the river, I took to a rafting Facebook group to ask the opinionated boating masses. With hundreds of replies, it became even more clear that river rats love their coffee. I simplified the seven most common coffee-brewing methods that rose to the top and listed them below, with each comes considerations of group size, trip duration, and how much space is available. 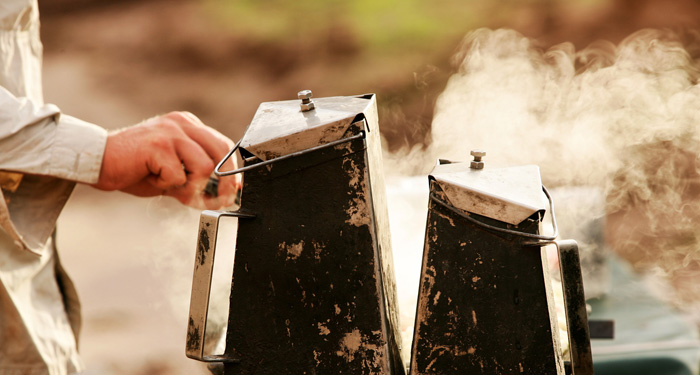 By far the most popular with 14 votes, cowboy coffee is the simple method of brewing coarse coffee grounds directly in water and waiting for the grounds to settle to the bottom before pouring – similar to what Powell did to get that caffeine buzz back in the 1800s! Some also pour the concoction through a strainer or filter into another vessel to ensure the drinker doesn’t get a dose of grounds at the bottom of their cup. Cowboy coffee is ideal for large groups as it is easy to make big batches and the cleanup is fairly minimal. Another benefit is that it doesn’t require any extra fancy gear to pack in an already crowded kitchen box.

Holiday uses unique versions of cowboy coffee on trips that have been perfected over the years. Multiple idiosyncratic techniques have led to what Lauren Wood calls the “gold standard,” which is ground brewed in a stockpot then through a doubled-up strainer. Additional quirky measures are also taken by certain guides, such as tapping the pot to settle the grounds, pouring cold water over the top, or the ever-popular “rockstar method” that entails the barista swirling the pot in large-bold circles with outstretched arms hoping to drive the grounds down to the bottom of the pot. Guests will also find the coffee pots to be eccentrically rectangular shaped to fit in dry boxes to maximize limited space, certainly unique to Holiday!

One less mentioned technique with only four votes, yet seemingly brilliant as it is simple, is a coffee sock. Largely what it sounds like, a coffee sock is a cloth or mesh pouch that you put grounds into and set into a pot, and pour boiling water into. A glorified extra-large teabag of sorts, one simply lets the coffee seep, and then you have a pot of coffee. Why this requires cleaning the sock after each use, which may be tedious, it is easy to scale up for large groups is relatively quick, and eliminates any worry of thick coffee sludge at the bottom of your mug.

One of the most popular methods coming in second place with 10 votes, is the timeless french press. Consistently making good coffee without taking up too much space in the dry box, a french press (not glass, of course!) is a great option for small to medium size trips and leads to an immediately satisfied and highly-caffeinated crew. However, waiting for water to boil and taking some time to let the coffee seep before pressing, it can take a little more time than other methods and is not ideal for large groups. More so, cleaning grounds out of the press can slow down the overall morning routine of a crew, so it may not be the best option if the group has a long day ahead of them. 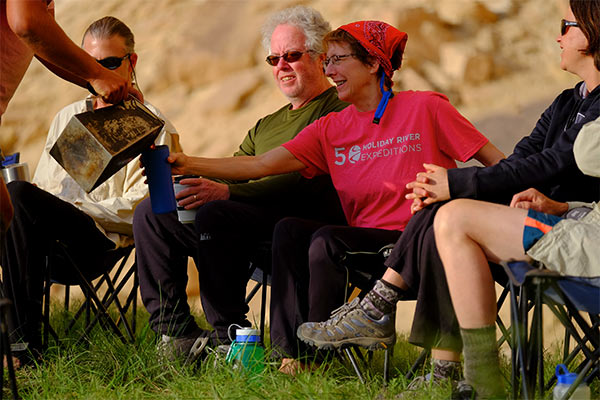 Percolators are a time-tested method for coffee brewing, and the blue and white speckled enamel pitchers have been a feature in river camps since rafting became a popular activity in the 60s. Coming in at the middle of the pack in my facebook-comment vote with six mentions, Percolators work by filling the metal filter basket with grounds (coarse grounds lead to a better brew) and boiling water that cycles around the grounds. You leave the percolator on the stove boiling for anywhere between seven and ten minutes, depending on the size of the device and how strong you want the coffee. This method works for medium-to-large size groups, depending on the size of the percolator.

Unfortunately, percolators are not always very consistent, especially if the river-barista is not an expert in the technique, and you may be disappointed with weak coffee. Another event to be aware of is when the water levels are incorrect, a coffee-ground volcano may erupt on the stove leading to a mess no one wants to deal with first thing in the morning.

With five mentions, a pour-over is a straightforward method of making coffee in the morning. Perhaps lacking the full-bodied, complex taste of a french press, a simple filter is placed in a cone over a thermos or mug and boiling water is poured over the coffee. Some respondents indicated this method can work for larger groups, however, I would be weary of weak coffee if the proportions do not come perfectly. However, the simplicity and lack of clean-up, makes this an attractive method, especially for smaller groups.

Some river trips take place in small boats like duckies or packrafts and don’t have the luxury of space in a dry box for large pots or percolators. Therefore, in order to ensure an adequate cup of coffee is still possible, instant coffee made on a jetboil or pocket rocket stove is a great option. These days too, some instant coffees taste rich and flavorful and is a no-fuss method for making a quick cup of joe with no mess. At least five boaters mentioned instant coffee as an acceptable practice of fulfilling the morning coffee ritual on the river. 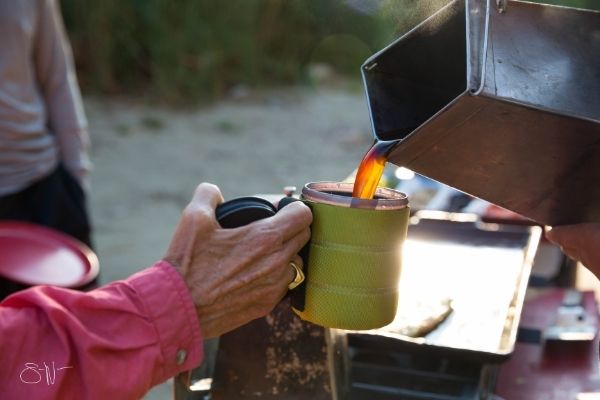 At least four respondents commented with notable fervor that the modern invention of coffee-brewing-bliss was with no hesitation, an AeroPress. For those who have not heard of this small french-press-of-sorts, it is a small plastic press with specialized parts that steeps the coffee quickly and then is pressed down the narrow column to make one-to-three cups per press. The taste is delightfully devoid of acidity without losing richness, and consistently makes a high-class cup of joe.

While the AeroPress probably doesn’t make sense for groups and requires keeping track of multiple parts, it is something to consider for small groups or lazy mornings.

Regardless of the method, once you have your cup of coffee in hand, it is a whole other matter as to what to do with it. Some require cream to make the whole endeavor worth it, while others are entirely comfortable downing a whole cup of black coffee straight. Or, perhaps it is a layover day, and you decide to treat yourself by putting in a swig of Bailey’s – after all, you are on vacation!