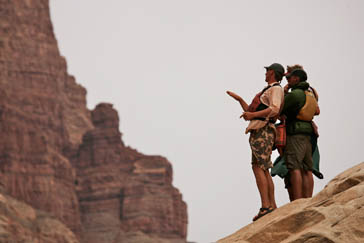 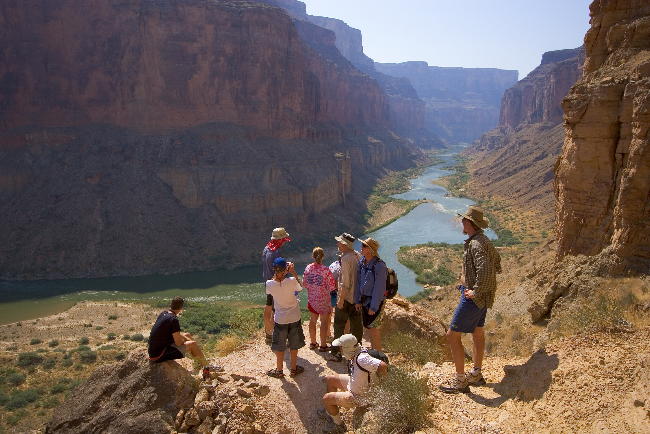 Pretend this is you… back when you were maybe 8 or 10, on a summer vacation “RV-Trip-‘o’-the-west” with your parents, and maybe a bratty younger sister or brother. After 3,000 miles of stories about the magnitude of The Grand Canyon, its shear size and majesty, your family pulls up to a busy, scorching hot parking lot, pours out onto the glistening tarmac and lope over to the edge of the rim to peer down into the deepest hole you ever have seen. From your vantage point, you catch a glimpse of the silvery ribbon of water far below catching the reflective blue of the sky above. “Is that the Colorado?” you ask your Dad. “Yep, the mighty Colorado River…” 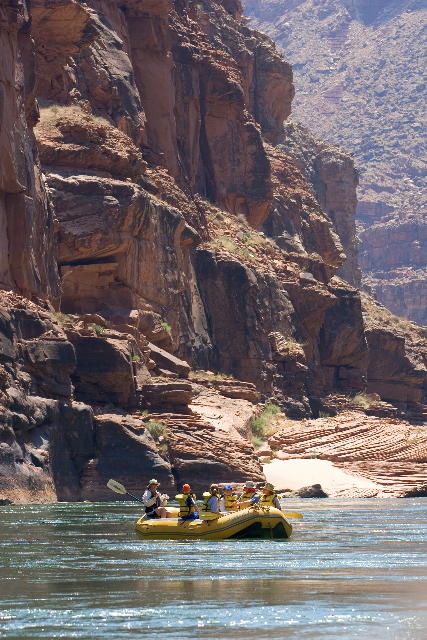 The National Park website states that five of the seven life zones and three of the four desert types in North America can be found in the Grand Canyon National Park. The five life zones represented are the Lower Sonoran, Upper Sonoran, Transition, Canadian, and Hudsonian. This is equivalent to traveling from Mexico to Canada. Along the river where side canyons meet the Colorado with blue waters and raging rivers, it’s as if the word “fairyland” was created just for such places. Flowers and mosses abound and a quick dip into the cool water allow ruminations about what the people before us thought when they inhabited such a pristine and magical place. Paleo-Indians, Basketmakers, Ancestral Puebloan, Cohonina, Cerbat, Pai, Southern Paiute, Zuni, Hopi, Navajo, and Euro-American all inhabited the area at some point in geological time. Did they spend time taking in the solitude?

The Grand Canyon is also one of the most studied geologic landscapes on earth because as 4 different eras of time are represented as the river has eroded through its 275 miles. The canyon walls rise 6,000 feet up at its deepest point, and to 15 miles across at the widest. The aforementioned Sci-Fi-sounding names are actually names of rapids caused by rock-fall within the canyon and the erosive power of the winds and water flows. Names that you will never forget once you meet them. 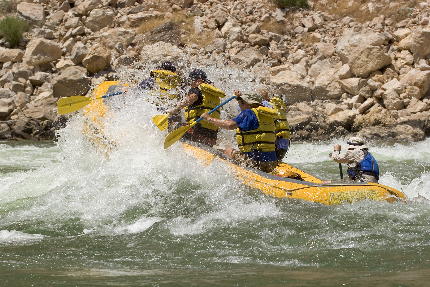 Fast forward 20-30 years, after that initial teaser, you now are at Lee’s Ferry about to spend 18 days IN the Grand Canyon. FINALLY! Enter the character names of your new friends from the Science Fiction realm…. When you decide to go on this trip, there is nothing that compares to the sound of a rapid around the corner, when you can feel the water pulling the boat downstream toward the thumping, roaring sounds of another BIG rapid. There’s no going back, and the nervous tension is palpable in the boat, and inside the gut. Hold on, maneuver the raft, “hey diddle diddle, right down the middle,” wet face, wet body, hold on to your hat, whoops of delight and screams of exhilaration. The furious sounds recede to quiet as you look forward to the next bend in the river, the next big drop of water. You look across the boat, and at the biggest grin you’ve ever seen on your dad’s  dripping face.