Young KINGs of Climate: How “Keep It in the Ground” is shaping the environmental movement. 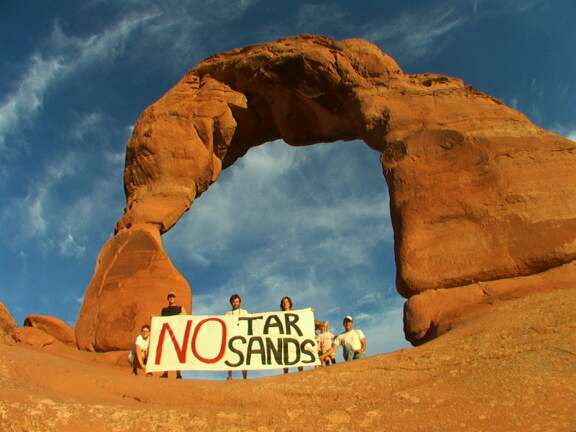 How “Keep It in the Ground” is shaping the environmental movement.

Interior Secretary Sally Jewell calls it “naïve.” Obama’s top science adviser says it’s “unrealistic.” Meanwhile, the movement to “keep it in the ground” leaps from the radical fringe to congressional bill and campaign talking point. Keep It in the Ground (abbreviated as KING) is one well-researched demand: Stop leasing federal land to fossil fuel extractors. Those companies will use leases they already own for decades, releasing massive amounts of carbon. To stop runaway climate change, the rest must remain underground. But more than a demand, KING is a movement. It’s a vibrant culture of resistance made of hopes deeper than talking points, and powered by a rare resource of the remote lease tracts of the West: love of the land.

Some of the best young KING organizers in Utah recently showed me how this movement is shaping the way we fight climate catastrophe. Around a campfire on the Tavaputs Plateau, Cali Bulmash sings to the land around us:

It’s a full-fledged valentine to land my Mormon ancestors called “one vast contiguity of waste and measurably valueless,” and which the environmental impact statement for the adjacent tar sands mine insists has “lower scenic value.” This is, asserted an oil-and-gas man, “where God just stuck dirt to keep the earth from falling apart.”

But Bulmash, a vivacious spoken-word poet from New Jersey and new member of Utah’s KING campaign, has fallen in love. She says this is why she risked arrest here last June, when she and 40 others built a permaculture berm directly on the tar sands strip mine, planting the denuded land with native grasses and sagebrush.

People gonna rise like the water
Gonna calm this crisis down.
I hear the voice of my great-granddaughter
Saying keep it in the ground.

Bulmash sang these same words with me in May, while disrupting a Bureau of Land Management auction in Salt Lake City, where fossil fuel companies bid on vast tracts of public land. The police who dragged us away didn’t seem to fully appreciate our four-part harmony. 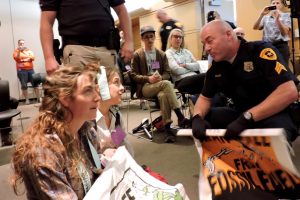 Bulmash’s story line traces an arc familiar to many KING activists. For years we have studied climate change and felt gut-corroding anxiety over our future. What finally moves us to action is connection to a place.

This is Keep it in the Grounds power: to take abstract worry over the threat of climate change and plant it in land.

The protests in cities and at land auctions are rooted in love for a place threatened by new development. Keep It in the Ground grounds us, and in turn builds friendships, as strangers bond over shared affection.

“It gets into your blood to be out here,” says Melanie Martin, a soft-spoken writer who has supported climate justice efforts in the region for years. “It’s like that book ‘Wisdom Sits in Places’—this place holds stories, and shared stories connect me to others. The scar of a strip mine is a punch in the gut,” Martin admits. Her walks on the plateau are interrupted by the rumble of machinery, “but at the same time I’m aware of all the life around me,” she says.  “There is still so much to be protected. I’m thinking of everyone downstream, and I’m thinking of climate change. But honestly the most power comes from the land itself.”

The conservation movement has long known this: To move others to act boldly in defense of land, you’ve got to get bodies out in it.

But conservationists typically focus on “special” land—charismatic cliffs and views—which can become a save-this, drill-that realpolitik that allows “sacrifice zones.” When KING links land to climate, it takes a radical step: The atmosphere doesn’t care whether carbon came from underneath a natural arch or a cow-studded plot of “low scenic value.” Keep it in the Ground challenges us to love—and defend—all places.

It’s a wild ambition, but it also builds solidarity. “It means we can’t throw anyone under the bus,” says KING organizer Lauren Wood. “And it resonates with people, because everyone has their own place. Their own paradise.”

The stance against sacrifice zones might be opening paths through a prickly territory often avoided by environmentalists: a history of racism and indigenous genocide. When I asked young organizers about leaders, not one mentioned the heads of KING-rallying NGOs. Though they’re grateful for this institutional support, they named instead the front line communities who have practiced land defense for centuries.

One mentor mentioned is Nathan Manuel of the Tohono O’odham Nation, who told me calmly over lunch, “let’s look at colonization, sterilization, genocide. We’ve had no choice but to be land defenders.” Manuel’s ancestral territories in the Sonoran Desert are cut in two by an imaginary line called the border. He insists that the violence of the border is tied to abuse of the land: “What happens to the land happens to the community, and vice versa.” He explains part of resistance is “a deep-hearted connection to Mother Earth and her people.”

Henia Belalia, a French-Algerian land defender, works tirelessly against extraction throughout the Southwest. When you compliment people around here on their hard work, they’re inclined to say, “Well sure, but I’m no Henia.” Belalia tells me, “It’s the same systems that are destroying the land here, incarcerating people of color and keeping them under the constant threat of violence. We can’t win without doing some deep intersectional organizing.”

Lauren Wood agrees: “We need to have an anti-colonial perspective. This work means decolonizing the way we perceive public land. It sounds radical, but we must acknowledge that this is stolen land, and we could ruin it forever.”

These connections mean hard conversations and worries of mistakes for white organizers—and also losing the ability to facilely sing “This Land is My Land”—but the connections also forge a humility that radically shapes the movement. Frontline land defenders often demand space for ceremony and prayer, and the entire movement finds itself re-centering in music, art, and deep healing work. An old word settles back into our vocabulary: “We desperately need sacred places,” says Melanie Martin. “That’s what being out here does‒it becomes sacred to you.”

I was walking with Bulmash in my favorite shady valley below the tar sands mine when she broke the bad news: This place could become “fill.” The rubble scraped from the mine will end up here. I had known before then that the mine was wrong, but now an alarm sounded inside me. This quiet aspen grove where I’d sat and laughed with people I love, where I’d watched woodpeckers and mule deer, would be buried in rubble?

If “naïve” means lacking experience, those who haven’t sat in this aspen grove, given it offerings and prayers, or crooned it a love song, are naïve. Those who haven’t felt this land’s reality are “unrealistic.”

The heart roots down. The young KINGs of climate movement is anchored and un-budging: Keep it in the (sacred, much-beloved) ground.

*** You may have noticed some quotes from Holiday’s own Lauren Wood in here; she and other climate organizers on the Colorado Plateau are happy to continue fighting alongside Grand Canyon Trust, Living Rivers, and others to fight for the rivers we all are lucky enough to keep running with you.

Kate Savage grew up in the Mojave Desert and now writes and organizes with Wasatch Rising Tide and Showing Up for Racial Justice in Salt Lake City, Utah.