Who Wants to Play in the Doll House? 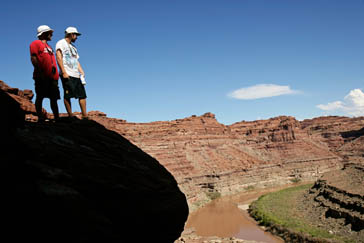 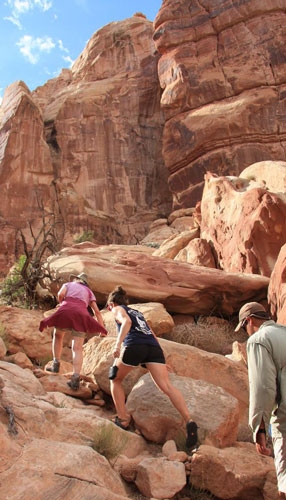 Who Wants To Play In The Doll House? Hiking up to the Maze District from the Colorado River

Even hot, sweaty men like this Doll House. As do the hot, sweaty women. Of course, the “dolls” on the Doll House hike dwarf us, like we are the miniature playthings and not them. These towering and bulbous “rock-doll” pinnacles populate the entire mesa. Ancient, silent figures at home in an equally mysterious maze of rocks. It is no wonder this area is referred to as the Land of Standing Rocks.

Prior to hiking the 1,200 ft. ascent from our Colorado River-side campsite, we doused ourselves with river water and filled up extra water bottles and increased our GORP rations. Fortunately, the late afternoon sun allowed the cliffs to cast their shadows on us as we climbed the mile-long switchback trail along the right side of the Colorado River.

Even for those who hate to sweat or work the quads, it is well worth it. Located deep in the Maze District of Canyonlands National Park, the Doll House is not easily accessible by roads (5-6 hours of four-wheel driving necessary) . It is unlike any terrain you’ll have seen before—even if you’ve been to the moon.

It’s a playground to explore, filled with slot canyons and humbling views of the Needles District and Island in the Sky, as well as the San Juan, Abajo and LaSal mountains. Far below, the Colorado River cuts a swath through the red rock country.

Instead of walking the five-mile loop around the Doll House, we explore a few highlights. Some highlights are well known, some discovered by our guides who over the years have played in the doll house enough to admit that, “yes, they do play with dolls.” An ancient granary echoes its original builder whose fingerprints are pushed and preserved in the granary’s mud casing. Unlike the granaries we saw earlier on other Cataract Canyon hikes, these have wooden supports which helps keep them well preserved.

Like small figurines, we wander down slot canyons that brace us from both sides. We slide through one horizontal slot canyon, crawling on our bellies as we emerge on the other side—this is the “Birth Canal” our guide Kevin says, grinning as he watches us each slither and scoot from beneath these rocks. Strangely, in this ancient place, I do feel new to the world.