Where’d the Salmon River get its name? 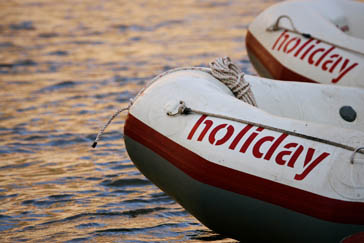 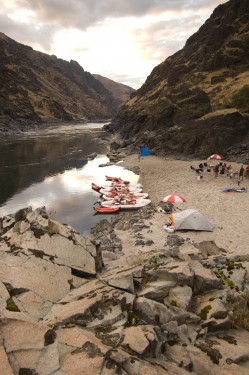 It’s a surprisingly common question: “Where’d the Salmon River get its name?” And the answer is simple. It’s named after Jack R. Salmon who was the first European to build a cabin on the river. NO! That’s not even close to true. It’s named for the fish – the indomitable salmon.

It’s obvious, right? But the name belies something that almost defies physics. The Salmon River is so far inland, surly sea-going fish don’t go there. But the truth is they do.

Salmon are incredible creatures. They live amazing lives. They should be added to the forces of nature: fire, water, wind, earth, and salmon.

Salmon are anadromous fish, meaning they are born in freshwater rivers; they live most of their lives in the ocean and they return to their birth rivers only to reproduce. In the Salmon River, we have two species: Chinook (also called Kings) and Sockeye (also called Reds).

From the Pacific Ocean at the mouth of the Columbia River, the fish swim more than 400 miles upstream just to reach the Salmon River in Hells Canyon (see our Salmon River Canyons trip). From there, they swim at least 100 more miles to reach their spawning grounds in the remote wilderness of central Idaho. During this migration, the fish, which weigh up to 45 pounds, eat nothing.

Their lifecycle is almost impossible to process. They hatch out of delicate eggs in the substrate of a mountain stream. As fingerlings, they swim hundreds of miles to the Columbia River estuary west of Portland, Oregon. Then they make for the open ocean where they live and grow for the next one to three years. At some point, a homing instinct is triggered and the powerful fish return en mass. 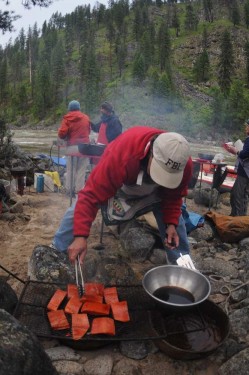 They swim up rapids and waterfalls like silver torpedoes. But unfortunately, every force of nature has a neutralizer. For salmon, it’s concrete – in the form of concrete dams.

The Chinook and sockeye that return to the Salmon River each year must negotiate seven dams. The dams are equipped with fish ladders, but the structures still exact a heavy toll. Each dam reduces returning fish numbers by 30 percent. Before those dams, the Salmon River was a highway for tens of millions of fish. Now their numbers are a fraction of that.

Even though our salmon populations are only a vestige of their primordial past, the fish still teach us an important lesson about the river we love. Often on our trips, while I sit on the beach, eating dinner in the day’s waning light, I overlook the river knowing that it’s more than rock and water. It’s a sublime coalescence between the rocky wilderness of Idaho and the wilds of the deep blue sea. And the indomitable salmon is the force that connects those two.

There’s something both satisfying and humbling about that. Long live the salmon.