When the Legends Gathered 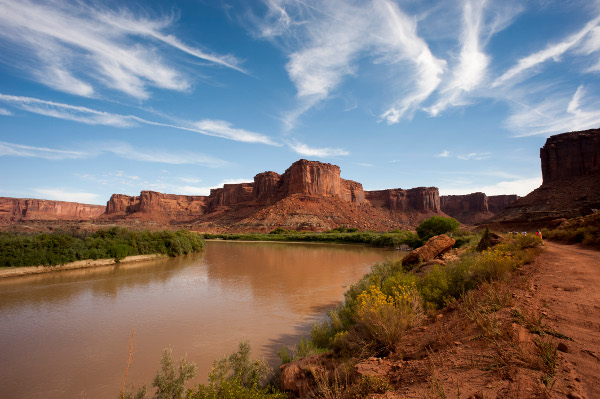 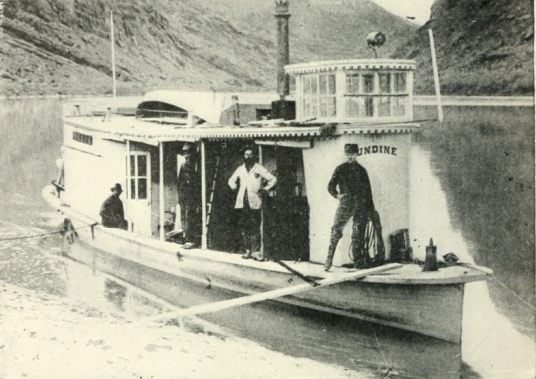 One test of a river’s navigability was whether it could support regular commerce. The sternwheel paddleboat Undine was among various powered craft that plied the waters of the Green and Colorado Rivers in the early 1900s, carrying passengers and supplying ranches, mines, and oil drilling rigs. In service for less than two years, it capsized in a rapid at Big Bend above Moab in 1902. Photo courtesy Wikimedia Commons.

As much as I love rivers, I wouldn’t call myself a river rat. That category is reserved for those who eat, breathe, and think rivers, whose waking hours are occupied with boat repairs and permit applications, and whose dreams are haunted by flowing water.  I’ve known a few of these folks, and if there’s one thing they like almost as much as oaring a raft or a dory, it’s being around other river people.  Stories are passed around, epic runs are relived, and rapids grow even gnarlier in the telling. Word has it that beer and other spirits are sometimes involved in these gatherings.

What was undoubtedly the most unusual convocation of river runners in U.S. history took place in 1929, and it revolved, strangely enough, around a federal court case. The occasion was a series of hearings held that year in three western cities to determine the navigability of the Colorado River and its major tributaries. The legal question was whether the State of Utah would be granted ownership of the beds of the Green, San Juan, and Colorado Rivers under the terms of its statehood, which hinged on whether they were usable for commerce. 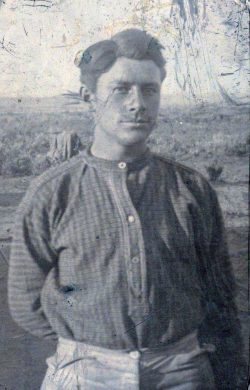 While still in his teens, Frederick Dellenbaugh signed on as assistant topographer for Major John Wesley Powell’s 1871-72 expedition down the Green and Colorado Rivers. He became a noted historian and collector of river lore. Photograph by J. K. Hillers, U.S. Geological Survey.

The key witnesses in these hearings were boatmen who had pioneered river travel on these streams. They formed a roster of river running legends, including Frederick Dellenbaugh, who took part  in John Wesley Powell’s second Green-Colorado river voyage as a seventeen-year-old in 1871; Ellsworth Kolb, who with his brother Emery filmed their daring descent of these rivers in 1911; and Bert Loper, who historian Roy Webb names as “one of the first true river rats.”

Some of them, like Loper, had come to these rivers in search of gold and stayed for the adventure. Others were photographers, like Frank Nims, who recorded the 1889-90 Brown-Stanton expedition which surveyed a possible railroad route along the Colorado. Still others were involved in the development of the river guiding industry, including Dave Rust, a Utah native who took part in the Glen Canyon gold rush of 1897 and later offered guided voyages in Glen to a select list of clients.

The hearings took place in Denver, Los Angeles, and Salt Lake City, each with its own cast of river characters. Some of these folks had probably never seen the inside of a courtroom, yet they were called to the witness stand to answer questions about their experiences from voyages dating back fifty years or more. The transcripts of the hearings run to thousands of pages and are filled with detailed questioning of witnesses as to the depth, swiftness, and difficulty of various reaches of these rivers. In a later blog, I’ll present some of the fascinating testimony of these pioneer boatmen as they describe how they dealt with the big drops of Cataract Canyon in the days of wooden and steel boats.

Ellsworth Kolb, chief boatman for a 1921 U.S. Geological Survey expedition in Cataract Canyon, tried to run Dark Canyon rapid but hung up his boat in what he called “a nest of rocks.” Much effort was needed to free it. Such experiences led to this stretch of the Colorado River being declared unnavigable in the 1929 Colorado Riverbed Case. Photograph by E. C. LaRue, U.S. Geological Survey.

I would have loved to be a fly on the wall when these boating legends got together after court was adjourned each day—perhaps in their hotel rooms or in the bar–and shared stories of their time on the river. But we can be certain that connections were made and old friendships were renewed. Dave Rust had a keen interest in river history and especially enjoyed meeting Fred Dellenbaugh, the Powell Survey veteran, at the Los Angeles hearing. The two men kept up a correspondence for years afterward. Rust ran into Bert Loper, too, which led to the two men joining forces for a Glen Canyon voyage the following year.

The Colorado Riverbed Case was settled mostly in Utah’s favor, with the declaration that almost all of the Colorado and Green Rivers within the state were navigable for commerce. The big exception was Cataract Canyon, the most difficult stretch of the Colorado in Utah, which was found to be unnavigable by ordinary boats. Part of the San Juan River was declared non-navigable as well and thus remained in federal ownership. Utah’s intention was to lease these riverbeds for minerals, which fortunately did not lead to an oil development boom right along the waterline. Nor was public access to these rivers much of an issue, since they flow mostly through federal lands. 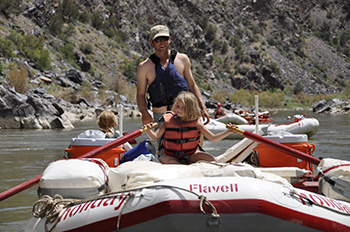 River pioneers such as George Flavell are honored in the names of Holiday’s boats.

It’s doubtful that the pioneer rivermen who took part in these hearings could have foreseen the explosion of recreational river travel brought about by the introduction of war-surplus rubber rafts following World War II. A new generation of whitewater outfitters, from Bus Hatch to Jack Curry to Ken Sleight (and starting in 1966, our own founders Dee and Sue Holladay) brought these adventures within reach of the general public. You can relive some of this fascinating history on our specialty trips in Desolation Canyon and the Yampa River!