When Guests Have Had Enough; A Creative Solution to Food Waste on the River 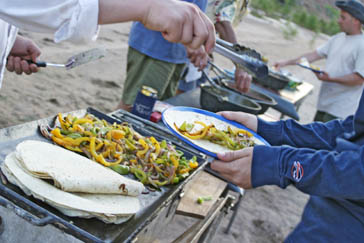 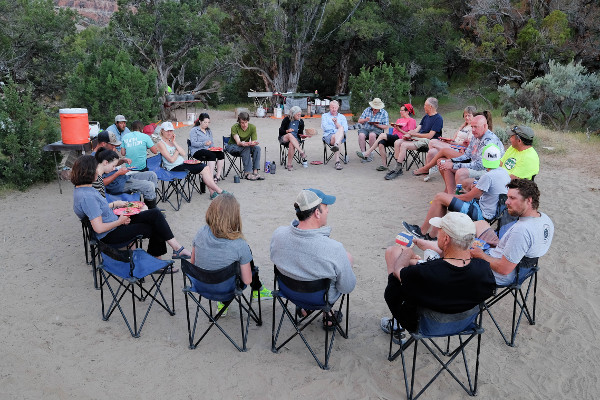 When Guests Have Had Enough; A Creative Solution to Food Waste on the River. Pigging out doesn’t always have to be about over-consumption. Keeping in step with its conservationist approach, the guides at Holiday River Expeditions determined a way to recycle food waste into, well, bacon. Now before you are up in arms, keep in mind these pigs have good lives, loads of attention from guests, shady digs, and dine on generous helpings of gourmet vittles from river trips.

“On a long, full trip, we might end up bringing back 100 lbs. of food scraps,” says river guide and trip leader Brin Finnigan. Some of this is dished up for the pigs (who all have gone by various names) and then the rest is composted. Keeping it local, the guides always purchase the pigs from a local farmer in Green River. “They have far better lives than a lot of animals on most farms,” says Brin, who was one of several guides on a Cataract Canyon river trip seven years ago that came up with the idea to recycle food this way.

“One of the most difficult jobs of any trip leader is determining how much food to pack and cook on our expeditions. Too little and riots will likely ensue. Too much and food is wasted,” recalled Brin in a blog he wrote about that first pig, Kashmir. He added, ”Within hours of the plan’s approval, all available guides were helping to construct a small slice of pig heaven. Several shade trees, a watering hole, mud, shelter, and a hand-cut trough full of more leftover pancakes, pasta salad, and lasagna than a toddler pig could dream of. As well as we fed her, and despite a few moments of tender hesitation among the crew, she returned the favor at our Late Summer Luau.”

Now despite being a Charlotte’s Web fan, a long-time vegetarian, and sporting my given name, Peta, I can understand the reasoning for this fork-to-pork approach in recycling food that would otherwise be yet more stuffing for a landfill. (Note: I was not named after the People for the Ethical Treatment of Animals Organization nor the People who Eat Tasty Animals bumper sticker.)

Despite careful packing and a tried-and-true formula for how much food to bring and prepare on Holiday’s river trips, not everybody is going to clean their plate or ask for seconds. That’s okay, because it will be packed out and re-served to those with a less discriminating palate.