Cataract Canyon & What’s Next in the Colorado River Basin 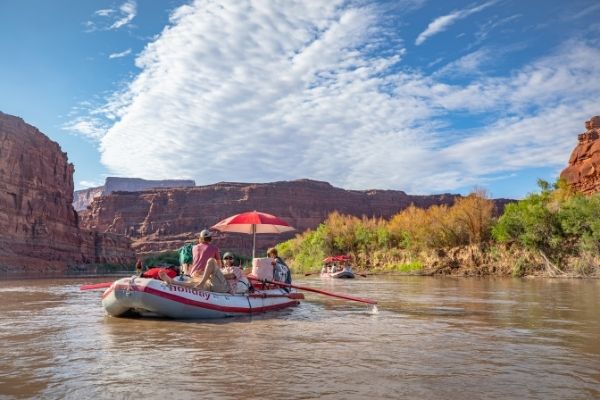 I was fortunate to be invited on a 5-day Holiday river trip down the iconic Cataract Canyon to discuss the multitude of interconnected topics surrounding water policy and ecology in the Colorado River Basin. At the heart of Cataract Canyon, the two largest rivers in the region come together; the Colorado and Green. This year, we’re seeing catastrophic heat waves, never-before-seen water shortages, and a future that is seemingly less certain by the day. There is no better landscape illuminating these compounding issues than down in the canyons, where our group was inspired to learn more and take action. 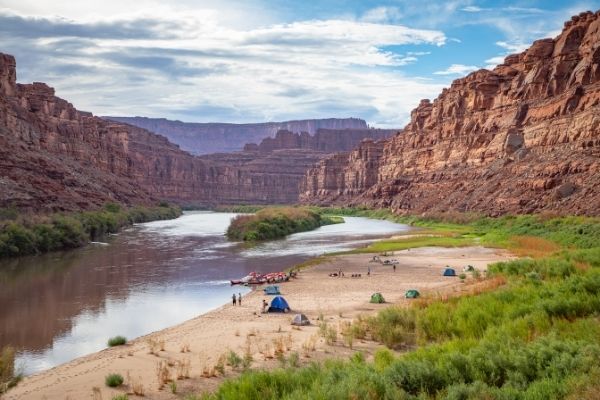 This past season, Cataract’s flows peaked in June at a measly 8,800 cubic feet per second (CFS); a fraction of the average, which is between 20,000-90,000 CFS. By early July, we were seeing around 4,000 CFS, with the water visibly dropping. Members of our group stayed cool by hopping in for a swim and using buckets to playfully douse each other in river water. Perched driftwood lodged in boulders high above camp, reminds us of high flows – and serves as a reminder that the river system could counterintuitively see extreme flooding in the coming years.

A few miles past the serene confluence of the Colorado and Green, the gradient picks up and drops into a series of over 30 exhilarating rapids. The trip culminates in Lake Powell – the stagnant reservoir storing water for Arizona, California, Nevada, and Mexico. As Powell’s levels nosedive below 33% full, many changes are happening to the river. First, new rapids are re-appearing as sediment settles and water drops – which means more fun whitewater for us to navigate. One less-convenient change is the boat ramp at North Wash has promptly turned into a vertical dropoff; forcing the guides to perform an impressive series of maneuvers with pulleys and portable rollers to heave the boats onto trailers in scalding 100-degree heat. 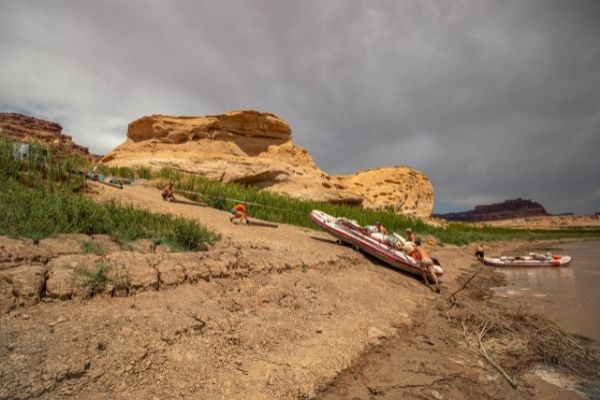 The low water levels we saw are a product of an unsettling amalgamation of water development and anthropogenic climate change that is fueling the rapid decline of water in the Colorado River Basin and across the world. Currently, 93% of the West is in drought, paving the way for another devastating wildfire year and increasing the need for water while simultaneously having less. It’s known that without human influence on global climate the deadly heatwave would have had virtually no chance of ever happening, and certainly, the massive network of dams, reservoirs, and canals transporting water out of river basins wouldn’t exist. Thirsty soils are guzzling melting snow before it makes it into river channels. Oppressive heat and heavy winds are supercharging evaporation – burning carbon has added layers of chaos to the planet and we’re seeing the results play out everywhere.

Reservoirs Powell and Mead, the largest in the Colorado River system, are both plummeting to record-low levels. This is solidifying mandatory and voluntary water shortages for Arizona, Nevada, and Mexico next year. Arizona, which in the 1970s agreed to receive more junior water rights in exchange for the construction of the Central Arizona Project (CAP), will be particularly hard-hit, losing around an estimated 500,000 acre-feet next year. The CAP transports water from the Colorado River to Phoenix, farmers in Pinal County, and to 14 Native American Tribes. Prior appropriation is the doctrine that water distribution is based on, allowing more senior water users (in this case California) to take their water before junior users receive any. (Read this past Holiday blog to learn more about prior appropriation.)

Over fajitas the night before the rapids, we discussed the days when Lake Powell was full in the 1980s. Wet years, and not as many diversions (mainly the CAP, which wasn’t completed until 1993) allowed the reservoir to comfortably fill. We even told stories of 1983 and 84, when a robust snowpack and quick runoff nearly topped Glen Canyon Dam. This is the antithesis of the dam operator’s current problems.

The federal government and Colorado River Basin states are all scrambling to prop up levels in Powell to reduce the risk of deadpool, where the dam would no longer be able to generate hydropower.  This past August, the Bureau of Reclamation shared a last-minute press release announcing increases in water releases from upstream dams, immediately starting with Flaming Gorge in Wyoming. Releases from Blue Mesa and Navajo Reservoirs on the Gunnison and San Juan Rivers are also expected later this year. The seven Colorado River Basin states have also been coordinating Drought Contingency Planning efforts since 2007 . This would effectively start planning for inevitable shortages (meaning there is no real path forward.)

On making cuts: who takes less? 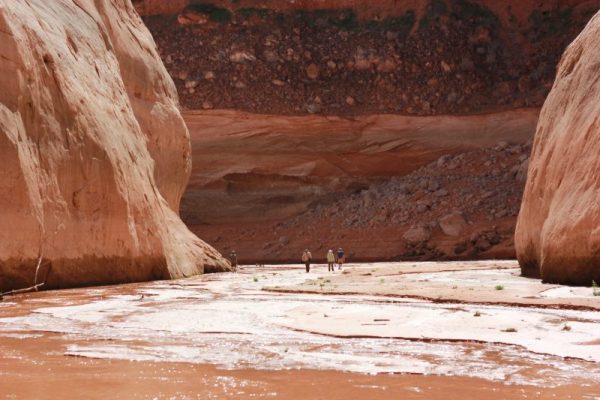 Just as the river fluctuates from roaring floods to a slow meander; it’s clear there is no static normal we can count on. These massive reservoirs have provided a false sense of security that is rapidly proving we as a society need to wean ourselves from the water we have become addicted to. However, making decisions about where to make those cuts isn’t always straightforward. Every decision we make has costs and benefits and reflects our societal values.

Agriculture amounts to about 80% of the consumptive water use in the Colorado River Basin, therefore, it is often identified as an area where shortages will occur. One example we discussed in the circle of chairs before dinner, was that of lining irrigation canals. Concrete is used to avoid seepage into the ground. While concrete lining enables water to flow more directly to the crops with less waste, it also does not recharge groundwater or support vegetation along the canals that have thrived in from the artificial waterways that provide wildlife habitat; tradeoffs that we as a society are making.

Where the Tribes Factor In…

On a large scale, the Colorado River is undeniably over-allocated. However, almost 20% of water in the river system (2.9 million-acre-feet) is allocated to Native American Tribes. Some of these are developed, but most are “paper water rights,” and do not come with the infrastructure to effectively use the water. Therefore, that water still flows in rivers and into storage reservoirs or is used by others in the system. Tribal water rights in the Colorado River Basin come from the state in which the Tribal Reservation is located. This means these negotiations involve a bureaucratic web of states, Tribes, and the federal government. Tribes in this young country have lived through layers of genocide and ethnic cleansing, and stealing resources such as water has been one major way settlers have harmed Indigenous peoples.

What Tribes decide to do (and what the government allows them to do) with their water will pave the way for the future of the Colorado River Basin. There are many creative solutions to towards that end. Water could be left in rivers to benefit ecosystems and tourism. It could be leased to cities or farms. And of course, developing new irrigation and municipal plumbing systems. Tribes all have different ideas and values and will likely make different decisions based on their individual needs.

Again we find ourselves with the question of what values drive the future. How can we balance the vital need to give water (and land) back to Tribes. But also not develop any more water? Portions of large Tribal Nations still do not have access to running water in their homes. That is simply unacceptable. All cuts need to come from water being used by Euro-American settlers with Tribes having full control of their water.

Law of the River 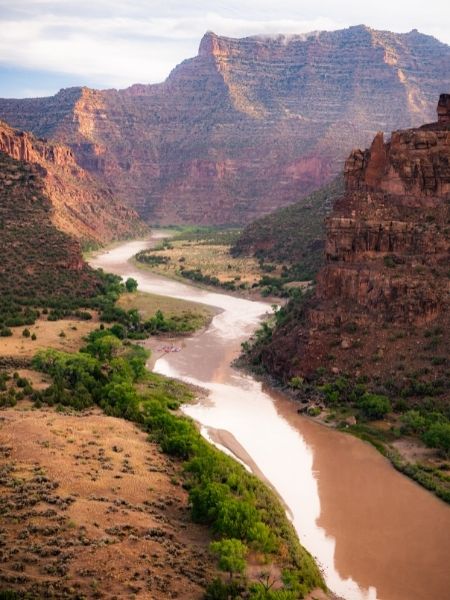 For now, prior appropriation and the Law of the River (the body of laws, treaties, compacts, that make up the allocation in the Colorado River Basin) will decide who gets less. Water users with more junior water rights to 1922 (when the Colorado River Compact was signed) will be more at risk than those with senior water rights. All states are piloting programs called “demand management”. This is where water users can be paid to not use all of their water while not loosing their water rights. This has been mildly successful, but is far from a silver-bullet solution and trust is a lacking factor for many. Further, it’s proved challenging to shepherd water downstream and ensure it’s not just simply used by someone else.

It is obvious the river itself is taking cuts. Fish are dying and many native riparian ecosystems are dominated by invasive species like Tamarisk and Russian Thistle. Our group of river rats saw the Tamarisk Beetle (a natural predator introduced to mitigate the growing problem) thriving down in Cataract . The trees were almost all defoliated to an extent. These small metallic-green beetles landed on us almost hourly while we were floating downriver on the rafts.

Finally, it is critical that no more diversions are built. The river simply has no more to give – it is overused. A newly formed coalition of diverse stakeholders recently met to demand a cap on water projects and to demand change of the failing status-quo, calling out Utah specifically or the particularly problematic Lake Powell Pipeline that would divert more water to suburbs in southern Utah.

It is clear that we are at a reckoning point. The systems in place imply are not sufficient to solve these problems. We’ll need to work more collectively to solve these issues moving forward. The individuality baked into the culture of westerners needs to be abandoned for the good of us all.

But what can I do? 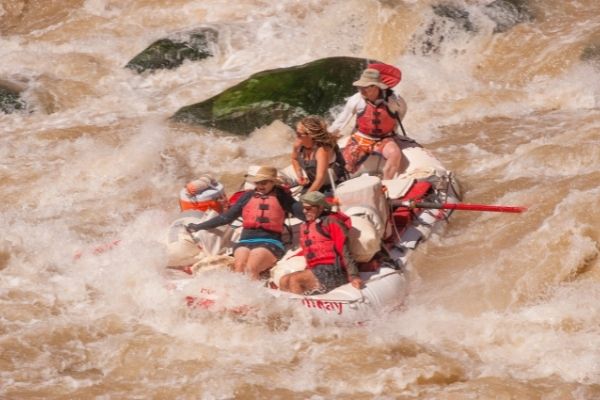 After the exhilaration of the rapids in Cataract Canyon, we sat down for one last delicious meal and conversation. The most common question I received all week was that of solutions. What can we do to help this slow-moving trainwreck of compounding factors?

In the big picture, technologies like desalination will likely become more cost-effective, as Frank told us one morning. Southern California and other arid countries have been successful on smaller scales. It is a matter of economics and securing enough (green) energy. Further, investing in stream and riparian restoration and ecosystem health will also be critical to a resilient watershed.

One Helping the Many

On an individual level, there are many things we can do. That could be engaging in water issues at local levels, educating your community, or becoming a climate change warrior. First, pick something that you care about. Maybe it’s a specific watershed that you can become engaged in. Perhaps a certain fish species you would like to advocate for. Or become involved in a campaign that lobbies oil and gas companies to dump fossil fuels. Get rid of your lawn – unnecessary grass is a major consumer of water in all western states. Las Vegas is even fining people who wastewater from their lawns. You can call and write your representative to suggest investing money in water conversation, or public transportation.

If you want to get outside, look for volunteer or stewardship projects that help improve riverside areas. Pulling weeds, picking up trash, or helping monitor water quality are all great activities that help watersheds.

If you’re fired up about social justice and equity, you can write emails and make calls supporting the bill Senators Bennet and Heinrich introduced, that would help the federal government fulfill its responsibility to provide Tribal Nations with clean drinking water. Also, there are many non-profits and mutual aid organizations you can financially support that are doing great work. Lastly, don’t feel hopeless. These canyons and rivers give us joy and adventure and we need to leave space to feel those positive emotions. As little Noah from our trip would say: “no rules, just party!”