Watersheds West of the Wasatch 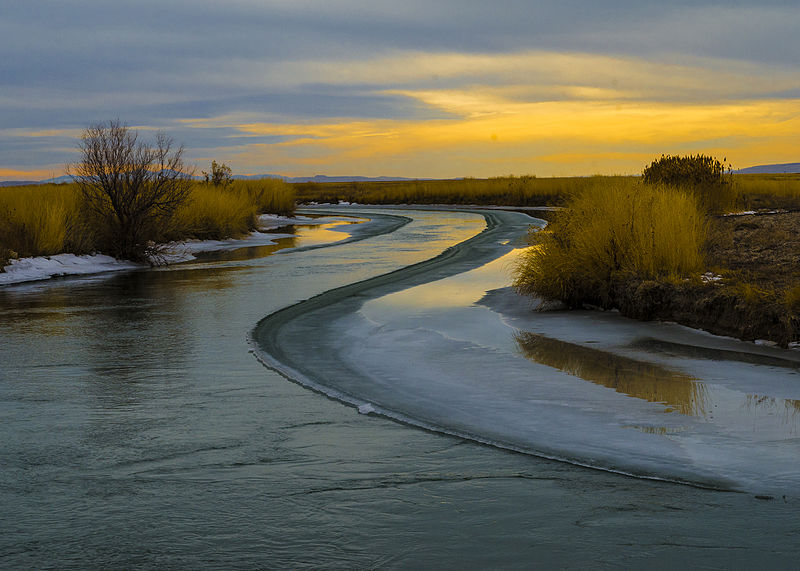 I don’t know how to write this as a happy story.

I don’t know how to talk about the Great Salt Lake right now without at least a bit of this heaviness settling into my gut and my chest. 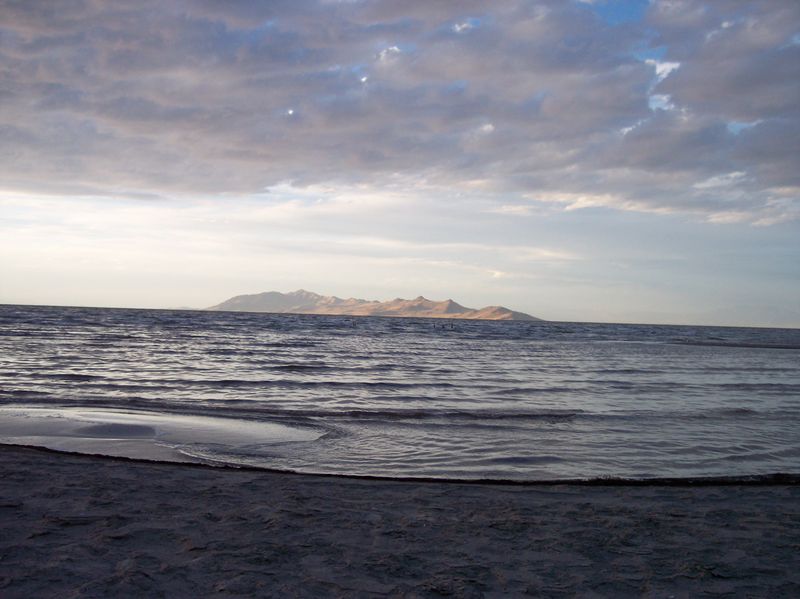 There isn’t anything like it, this bizarre body of water. The Uinta mountains to the east slowly seep down into the valley and wind up in the Great Salt Lake. It has two big tricks: 1) it is very flat and wide, and lets the sun slurp it up. Terry Tempest Williams wrote about the analogy taught in her school: while most lakes are cups, the Great Salt Lake is a dinner plate. 2) It doesn’t have an outlet, meaning it joins the ranks of “terminal lakes.” When white people first saw it, its lack of an outlet made them uncomfortable. The lake was a mistake.

The two tricks of this lake add up to salt. So salty. Fishless and fly-brimmed and crusted with salt, but the birds don’t seem to mind. Millions of them, eating the brine shrimp and brine flies.


The salty lake has been seen as worthless, a sump sink for trash. I wrote “has been,” but let’s be honest about time: it still is. A sociologist found that in some surrounding counties “the lake is pretty much construed as a waste of water.”

This mindset has extended beyond its shores, into the rivers. If all they’re going to do is wind up in the waste bin of a lake, then why not use ‘em up? Why not make them do something useful?

A friend who lives on Salt Lake’s west side tells me this week she got another notice in the mail: the Jordan River’s toxic again. A massive algal bloom is spreading out from Utah Lake, fed by the fertilizer washed off from farms and lawns. It can cause humans and other animals to experience diarrhea, headaches, and problems breathing, but you should see how green those lawns are. 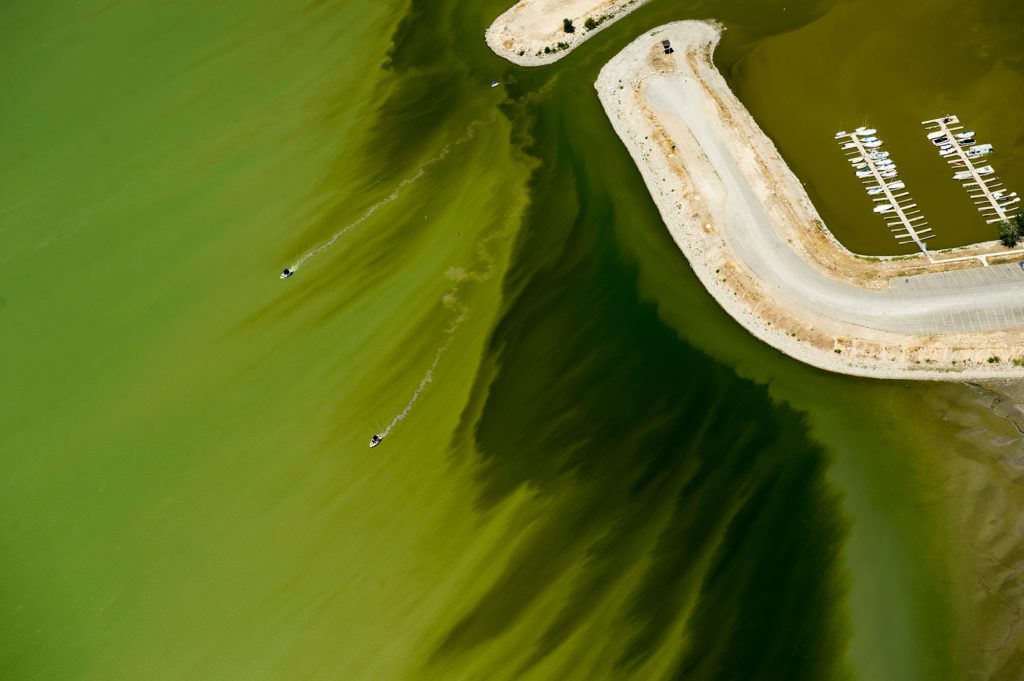 The Jordan River is about as managed as a river can be without simply being turned to plumbing. And it’s all the same beautiful, of course. They’ll have to try harder than that to make this not beautiful.

When my ancestors first came here, they called this river Jordan because they saw their narrative as a reiteration of the Holy Bible, the Jordan River flowing to the Dead Sea. The old world Jordan is famous as the place where Jesus Christ was baptized, but any baptisms here could cover you with neurotoxins. (On the bright side, Jesus only had the white dove, and we’ve got pelicans, avocets, shearwaters, and grebes).

Another thing my ancestors did is organize a “varmint hunt” around Jordan River. On these banks where you now find only ducks and housepets, they killed “two bears, two wolverines, two wildcats, 783 wolves, 409 foxes, 31 minks, nine eagles, 530 magpies, hawks, and owls, and 1,026 ravens.”

Historians assume a good chunk of those 783 wolves were actually coyotes, but still. 783. Ecologists conclude that before Mormon settlers, this river could have rivaled international wildlife parks.

And then there’s the river that brings most of the water into the lake: the Bear River. The Bear River begins in the Uinta Mountains and circles around like an Ohm, entering the Great Salt Lake in an estuary called the Bear River Bird Refuge. The Refuge is one of the most important habitats for migrating birds on this continent. 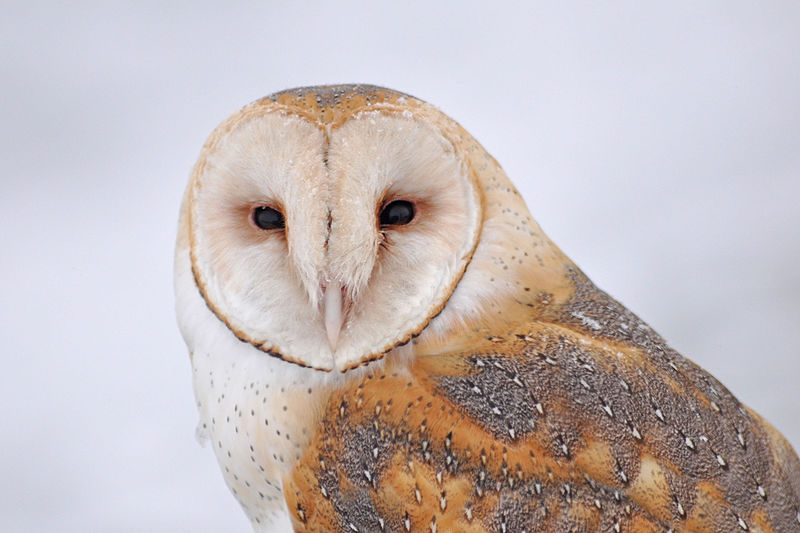 The people who manage the Bear River write like this:

“The Bear River’s average annual inflow to the Great Salt Lake is nearly 1.2 million acre feet, and with this plentiful water supply, the Bear River Basin is one of the few areas remaining in the state of Utah with a significant amount of developable water. It is anticipated that Bear River water will eventually be developed to satisfy the growing needs of areas within and outside the basin. Urban growth along the Wasatch front, primarily in Salt Lake, Davis, and Weber counties, has planners projecting a need to import Bear River water in the next 20 or 30 years.”

’Developable’ water means pumps and dams and reservoirs, water not flowing into the Bird Refuge, and water not feeding the Great Salt Lake. Squeezing the Bear River into something more like the Jordan.

The Bear River Project is imagined as a series of dams and reservoirs, to finally make this river useful. It hasn’t even been erected yet, but the lake hit record lows last year. The dust from the dry lakebeds is already blowing.

It’s the dust that troubles people most. Haze in the air and an itch in the lungs. When our air quality here is already an embarrassment, along with towering asthma rates and other health problems, we can’t afford more dust right now. 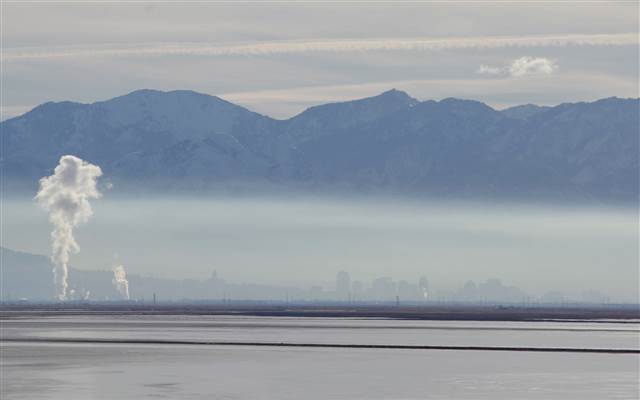 Worries over toxic dust have already delayed plans to build a prison by the lake. Researchers are trying to figure out what inmates are going to be forced to breathe when the wind blows. Arsenic, selenium, mercury (some of the highest levels of methylmercury the USGS has ever recorded).

You lock a person up right next to that dust, you’re giving them a much heavier sentence than the one gaveled out by a judge.

But the problem isn’t only here: we are living in the age of turning the world’s terminal lakes to dust. “Terminal” already sounds like something that’s on its way out.

And that’s how we treat them. Take the once-gigantic Aral Sea, for instance. The USSR considered the Aral Sea to be a “mistake of nature,” and diverted the rivers that fed it to agriculture projects. These farms in turn leached fertilizers and pesticides into the remaining lake.

The Aral is now 10% of its previous size, scarcely a sea and more like a sump, and expected to be completely gone within 15 years. All those agricultural run-offs are now blow-offs, giving a toxic edge to the massive dust storms descending on towns and upping their cancer and lung disease rates.

Or there’s salty Lake Urmia in Iran, which now half-disappears in the summer. Scientists worry the resulting dust storms could make it all the way to Tehran.

Or just two states away, there’s the Salton Sea. California’s Imperial Valley is seeing the sea — which was created entirely from agricultural runoff — shrink, creating the highest asthma hospitalization rates in the state. 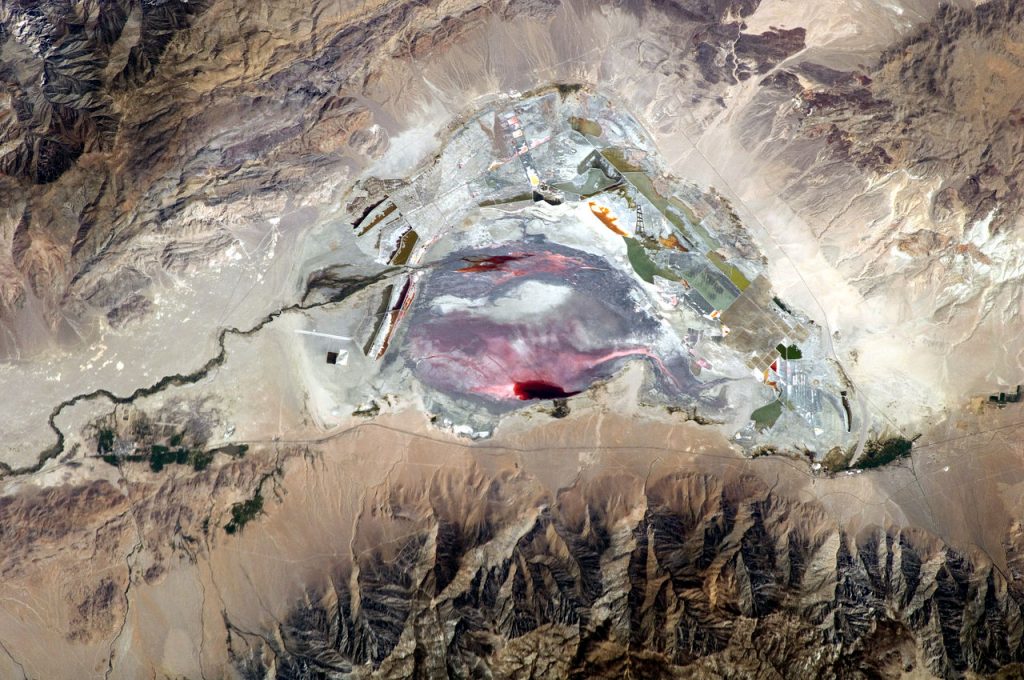 North of the Salton Sea is Owens Lake, which was drained in the 1920s to feed thirsty LA. The dry land that was once a lake is the biggest manmade source of hazardous dust in the U.S. LA has poured out more than $1.2 billion in dust suppression, along with 30 billion gallons of water every year, thrown onto the ground to stop the dust from flying up. But the air quality still suffers, with hazardous dust levels in the area 10 times the acceptable standard.

A Utah news crew, seeing the way Owens Lake could be a cautionary tale for ourselves, went there and talked to Kathy Bancroft, a member of the Lone Pine Paiute-Shoshone Reservation. She described the dust storms of a lake bed much smaller than the Great Salt Lake’s: “It looked like a big atomic bomb exploded. It would darken out the sun.” She says most of the Paiute and Shoshone living there have asthma.

Kathy says diverting water from the lake was “supposed to be for the greater good. But we’re not invisible. We’re still here, and trying to survive.”

There’s another terminal lake that has a different lesson. Anyone would have expected Mono Lake to follow the same pattern as the others, especially when the rivers that fed the salty lake were diverted to, once again, water LA. But in the 70s, a group began organizing to protect the lake, and mobilized tens of thousands of people to care about it.

They eventually got the California Supreme Court to rule that the State had an obligation to protect the lake, and LA let the waters return. Instead of taking its water from somewhere else, LA figured out how to use less.

The lake hasn’t reached its previous levels yet, but every year it recovers more. Every year there are more birds.

The first time I saw the Spiral Jetty, the black rocks were lapped by lake water. When we visit now, it feels like we’re walking for miles before we can put a foot in the saltwater. 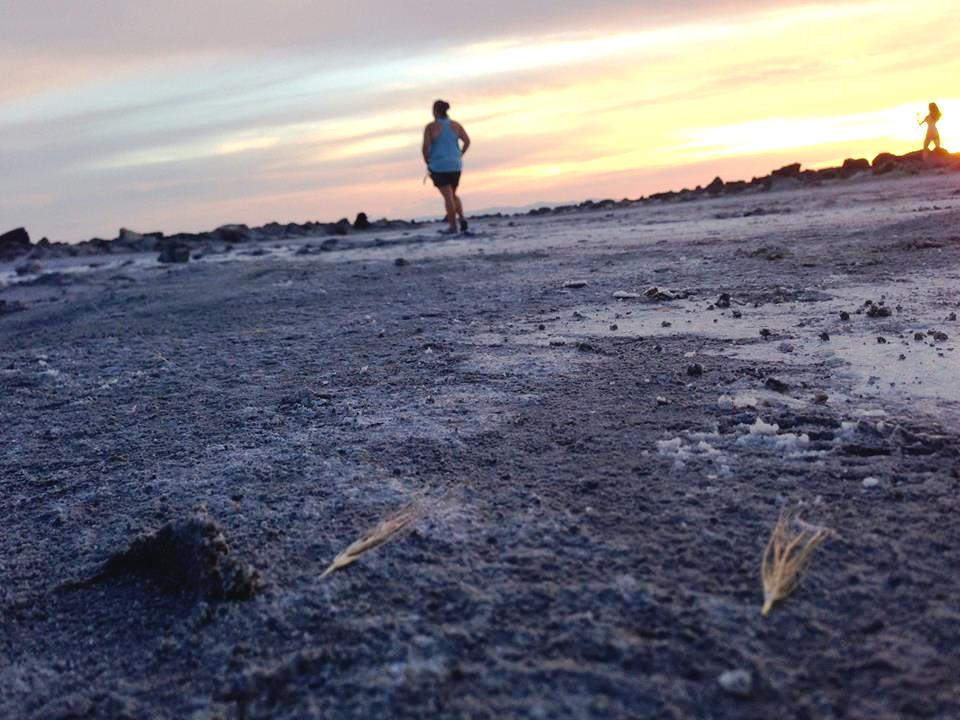 I know I can’t expect this lake to be stable. I know how it changes, how the Great Salt Lake has always been changing, from sea bed to desert, wobbling between being a massive inland lake and being parched salt flats. When Terry Tempest Williams wrote Refuge, lake-lovers were worried over floods and drowning nesting sites. Now those nesting islands have become peninsulas, exposed to predators (including that nasty local varmint, the ORV).

But then and now, cities have been swelling, spreading in this valley left by the prehistoric lake. Cities engulf the rivers, the way growing trees swallow old chain link fencing.

Once on the shores of Antelope Island Terry told a group of us she had heard the Great Salt Lake called “the lost daughter of the ocean.”

It’s so easy to feel this sense of loss now around the lake, the persistent ache of it. I think sometimes this is fine. That we can both accept change and also let this loss fill us so full it becomes obvious that taking care of ourselves means caring for this lost daughter, and that this means caring for the rivers that return home to her.