Water and Equity in the Colorado River Basin 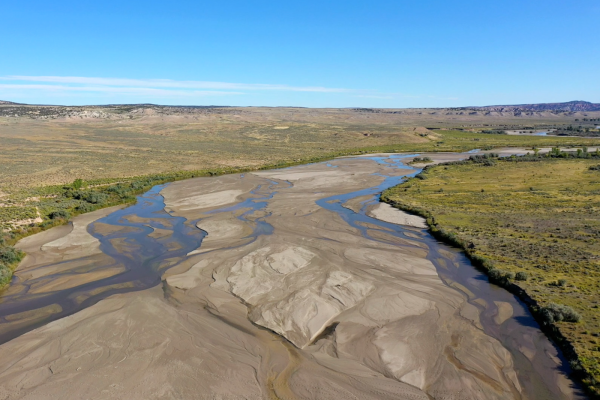 Water and Equity in the Colorado River Basin

Across the West, coal-fired power plants are closing, as profit from coal declines and renewable energy sources become more attainable. The exit of coal is imperative, as fossil fuels are supercharging the climate crisis; stoking cataclysmic hurricanes, convulsive floods, and catastrophic fires throughout the world. 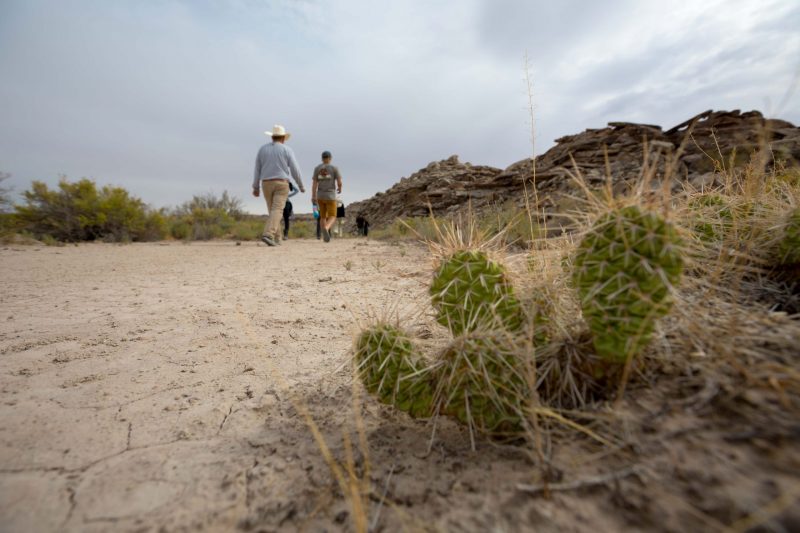 In the Colorado River Basin, it has been found that climate change driven by human-emitted greenhouse gases will likely reduce the amount of water in the system by 35% by the end of the century. To put that in perspective, the average annual Colorado River flow that the complex water allocation system (i.e., the “Law of the River”) is based on, is an already inflated 15 million-acre-feet (MAF) annually. One acre-foot is equivalent to 326,000 gallons. A reduction in flows of this magnitude, could leave less than 10 MAF annually. This is in a watershed that spans from Wyoming to Mexico.

Fossil fuels are not only contributing to the decline of flows in the Colorado River Basin. They are also devastating the quality of the land and water where fossil fuel extraction and combustion takes place.  Coal, oil and gas extraction often takes place on or adjacent to watersheds on or adjacent to Native American Reservations. These impacts perpetuate the genocidal practices that many native communities face every day.

To understand the myriad complexities associated with clean energy transition, it is helpful to identify a case study where the factors of water scarcity, equity, and power collide in real-time.

Driving west out of Farmington, New Mexico on Highway 64, a balloon of gray haze obscures the sky. Four smokestacks rise and unceasingly propel massive columns of steam upwards. This carbon-billowing machine is the San Juan Generating Station . It is  a coal-fired power plant a few miles from the Navajo Nation . It is also the state’s largest polluter of greenhouse gasses. 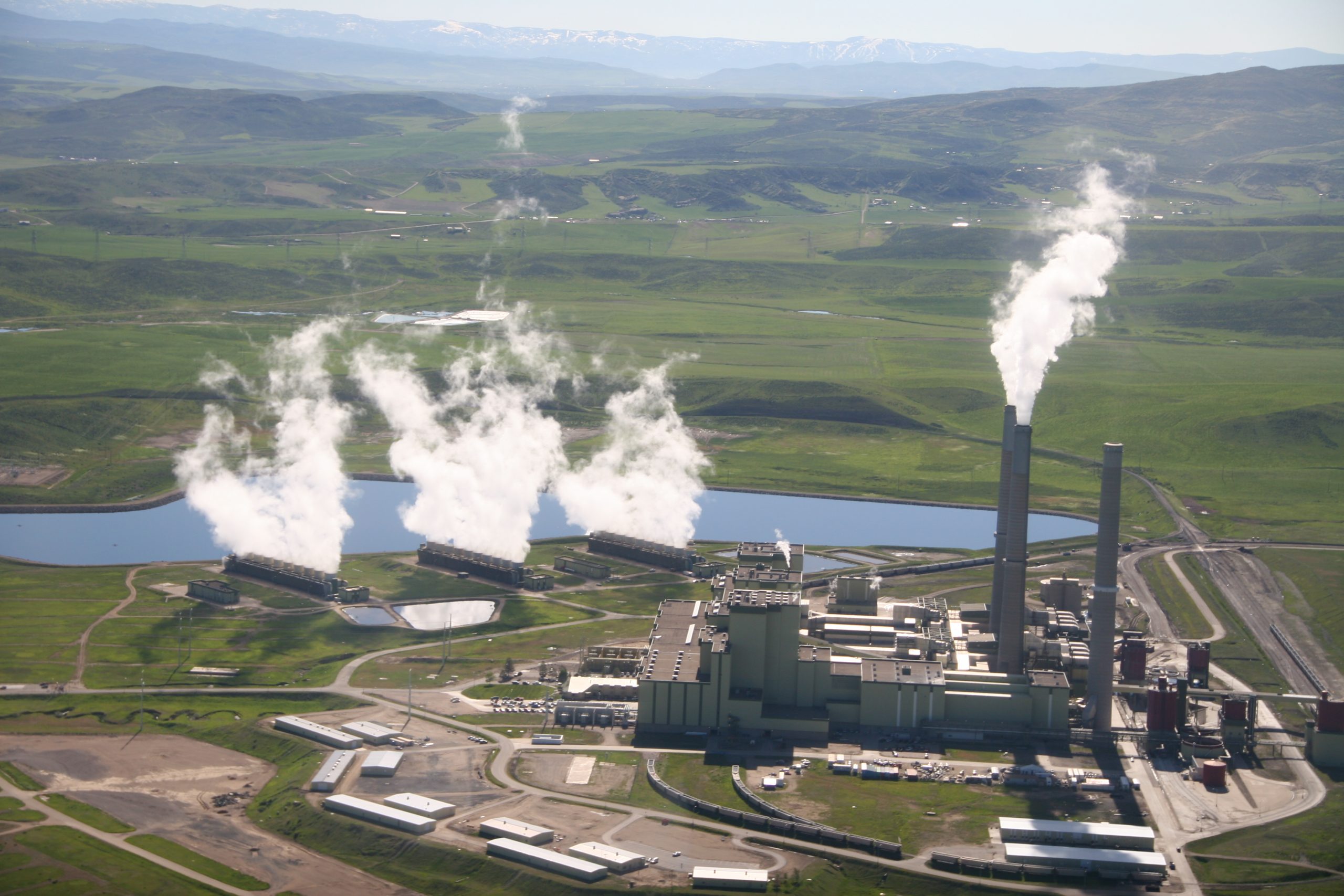 The four units making up the station were constructed between 1972 and 1982, sourcing coal from the nearby San Juan Mine Complex and sending energy throughout the West. Two of the units were retired in 2017. Citing a lack of profit — a trend seen with coal throughout the West— the majority owner, Public Service Company of New Mexico (PNM,) filed for abandonment. They will shutter the remaining two units in 2022.

Both the generating station and coal mine create well-paying jobs. The closure will create economic repercussions for hundreds of families. Not only are over 450 people slated to lose their jobs, but the area will take a huge hit from tax income generated by SJGS critical to funding local colleges, schools, and community programs.

The extraction and subsequent burning of coal has scarred the landscape by digging wells, mining, building roads; all of which cause immense disturbance to the earth. Further, the three coal fired power plants in New Mexico consumed 51 billion gallons of water annually between 2014–2018 and contaminates the water by leaching chemicals such as arsenic and lithium into arroyos and watersheds, and pollutes air by emitting greenhouse gases, particularly methane and ozone. Collectively, these factors are causing high rates of cancer and respiratory issues in local communities . The majority impacted are indigenous peoples on the Navajo Nation.

Water quality issues in the region from the SJGS and associated coal mine are already evident (though disputed by PNM,) and will continue to plague the region and San Juan River for an unnerving length of time. A 2017 U.S. Geological Survey report found that it could take 2,400 years for coal combustion residue now buried in pits in the soil to run into the San Juan River — far longer than any monitoring or reclamation efforts will last and effectively causing negative environmental impacts for almost 100 generations.

In order to provide some support to the transition away from fossil fuel-derived energy, in June 2019, New Mexico passed the Energy Transition Act (ETA). The new law is one of the most progressive in the country. It requires the state’s utilities to procure at least 50 percent of electricity from renewables by 2030. Then continues to 80 percent by 2040, and 100 percent zero-carbon sources by 2045. 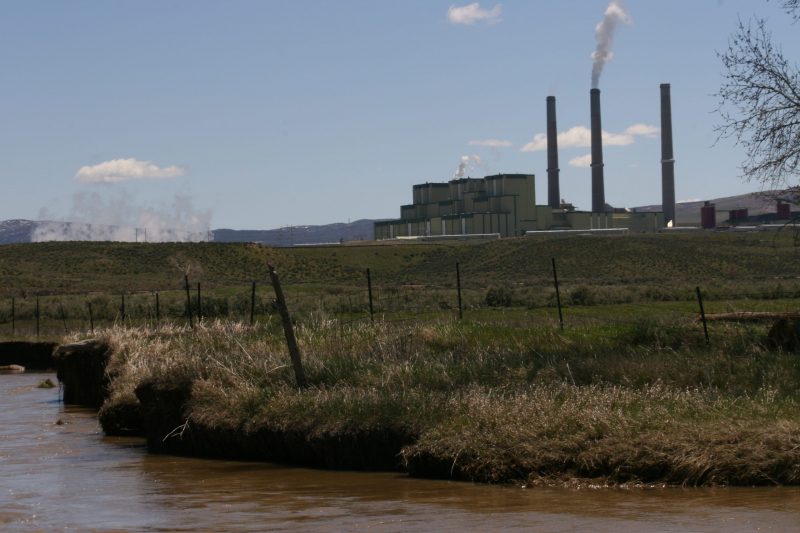 The approach centers on creating energy transition bonds and financing mechanisms to assist “qualifying utilities” with clean energy production, a mechanism called securitization, similar to refinancing a home at a lower interest rate. It also develops a commission to oversee the transition. This commission directs utilities to provide percentages of their transition bonds directly to workers.

In San Juan Generating Stations’s case, the ETA allows PNM to recover lost profits of up to 360.1 million coming from these low-interest bonds. The same bonds are used to provide up to 40 million in severance pay and additional training to SJGS workers.

The ETA allows some utilities to abandon certain facilities. It also provides financial support to move into cleaner and more profitable options without putting the onerous on the consumer. It also allows the utilities to use these bonds to recover costs from any “prudent” investments that they were unable to benefit from.

Many local Indigenous peoples critique the ETA as serving as a bailout for energy companies. It fails to support Tribes that have been the backbone of the coal industry in northern New Mexico.

A coalition of 66 Indigenous peoples and groups developed a list of demands regarding the ETA, centered on the lack of process, funding for environmental cleanup, and calling for increased tribal consultation. PNM was told to visit a handful of local chapter houses and communities and tell them the plant is closing. It is unclear how successful these attempts really were. 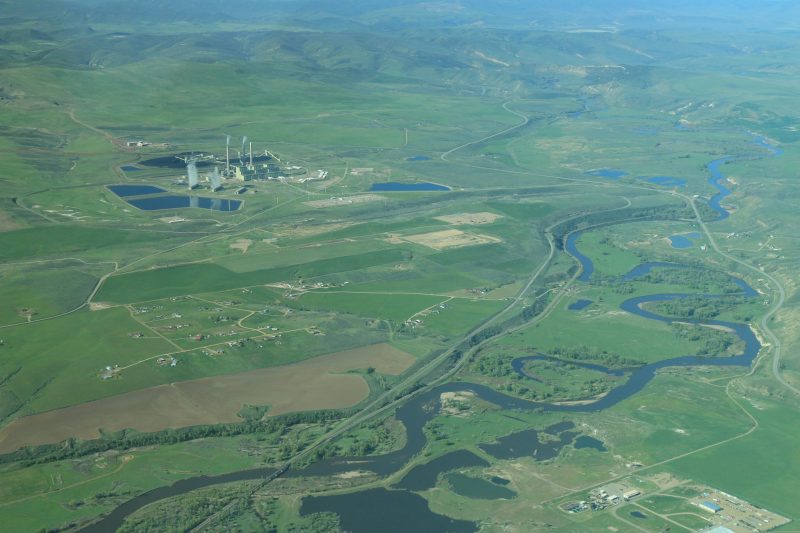 Many communities surrounding the SJGS are very remote, with poor transportation and education infrastructure and do not have access to internet or cell phone service. Despite mandated efforts, PNM and the state of New Mexico have not adequately taken the time to communicate what the transition away from coal energy means for them. Not only the economics, but also how SJGS’s actions have negatively impacted their lands and waters.

On the All my Relations Podcast, guest Kim Smith who is a Dine’ (Navajo) activist recognized additional challenges to communication, such as some elders do not speak fluent English, and many people on the Navajo Nation may not talk about the concept of climate change through the lens of modern western society and the role of fossil fuels, therefore, making the conversation more complex.

Further demands include breaking up energy monopolies, which the ETA does not meaningfully address. This action could make it feasible for Tribes to enter the clean-energy market on their own terms. Instead of riding on the coattails of large, self-serving corporations.

There was no analysis into how reclamation efforts will impact water sources, and as water becomes more scarce. It is unwise to not directly connect environmental reclamation following the closure of SJGS to the future of clean water on the Navajo Nation.

Indigenous peoples deserve clean water that is not tainted by the residue of greedy overconsumption & dirty energy. So far, energy corporations have taken advantage of Indigenous people for their labor and land to make immense profits. In order to make reparations, the shift to renewable energy needs to ensure equity and power for Indigenous people.

The future of the SJGS facility and potential renewable energy sources is uncertain at this point. The ETA does not require PNM to identify potential renewable sources to build in place of coal generation. However there are a few noteworthy options on the table. Also some of the water used by SJGS for the past near-decade may now become available for other uses. Water savings could provide for additional opportunities and be used to help with environmental reclamation. 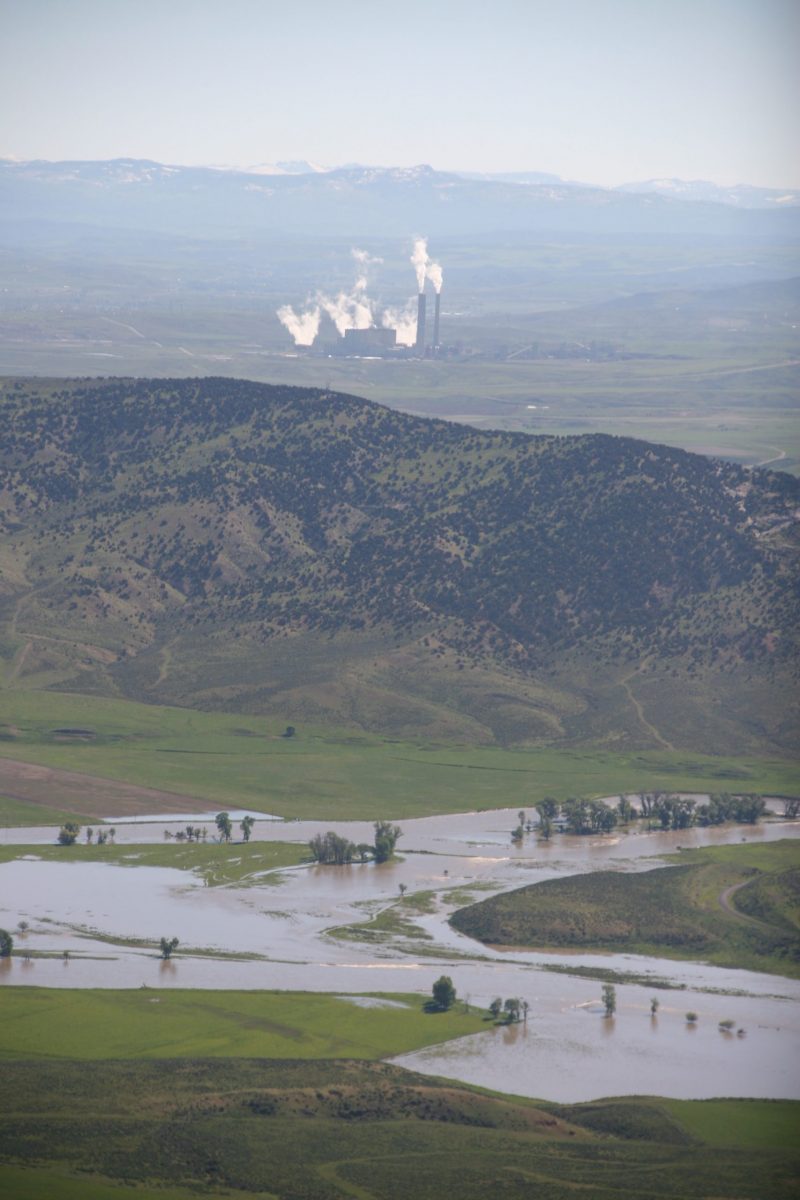 One option for the future of the SJGS facility, given the proximity to existing energy transfer infrastructure, is solar energy. An independent economic study found a 450 megawatt solar photovoltaic plant at the SJGS site could replace lost property tax revenue, support thousands of jobs over two or more years of construction, and generate more than $67 million in additional tax revenue for state and local governments.

What looks to be the most likely however, is converting the facility into a carbon capture unit. Enchant Energy has voiced plans to re-purpose the plant as a carbon sequestration facility that would maintain power generation in two of the four units while simultaneously capturing 90% of the CO2 emissions to sell and help produce more oil. The company postulates the move aligns with New Mexico’s clean energy efforts and would generate millions in carbon taxes, all while maintaining the same number of jobs and local tax revenue. However, the science of this technology being utilized at such a large scale is questionable, and many environmental groups and PMN have doubts about the feasibility of the technology.

Opposition to the transition includes a concern over increased water consumption in an already drought-ridden region. Some studies have found that carbon capture at the SJGS facility could use 50%-60% more water than it’s already using because it takes water to capture carbon dioxide. Since two of the SJGS units were shut in 2017, the plant has been operating with less water than their right allows for.  Enchant Energy believes that they can use the existing water rights to operate the carbon capture technology.

Further questions about the endeavor include the possibility that continuing to burn fossil fuels can equate to the large margin of carbon reduction claimed by Enchant Energy and their funders. Also in question is if a carbon-credit buyer even exists— the prospect of a carbon-purchasing market has been discussed writ-large but no formal program has been created. Finally, the costs of retrofitting the plant far exceed the costs originally intended for the de-commission.

Making Sense of the Messiness

One thing is clear — we are already behind on cleaning up our energy sources. A transition away from fossil fuels is vital if we are to have a habitable planet. Fossil fuel extraction in the Colorado River Basin has perpetuated climate change. It has led to reduced water in an already over-tapped and modified system. Clean energy solutions must consider water supply — the less water needed for energy production the better. It is clear there is no more to spare.

As river stewards, we must also understand the toll energy extraction has on many Indigenous peoples. Poor regulations and practices harmed peoples health and homelands. Utilizing labor of people from communities that do not benefit is morally reprehensible. Humans are tied to the land and each other. To create a world that is fair and just, reparations must occur within the process of a clean energy transition.

Funding and relief needs to help actual people —  not corporations . It needs to fuel an era of clean energy and sustainable, diverse local economies. Laws such as New Mexico’s Energy Transition Act may be a starting point. But communities deserve to have complete environmental reclamation costs associated with coal taken care of. That includes detailed training programs into diverse careers. An unjust energy transition is not acceptable — true change needs to support communities or we will never be successful.

* legal process of quantifying a water right for specific purposes