Through the Big Drops – in Boats of Wood and Steel 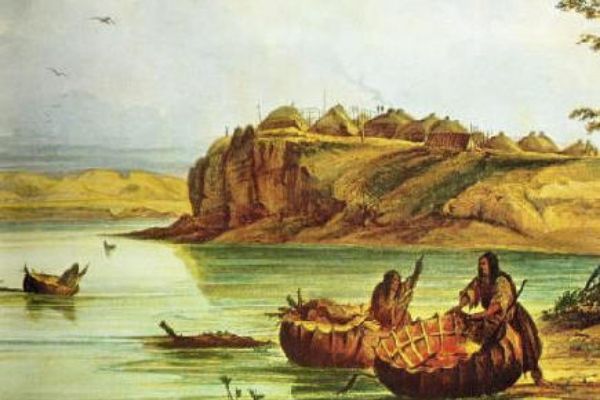 It may be hard to imagine in this recreation-oriented age, but Utah’s desert rivers were once busy commercial thoroughfares, their strong currents carrying prospectors, mining engineers, river-bottom settlers, government damsite surveyors, and loads and loads of freight. Every kind of craft from flat-bottomed scows to small paddlewheel steamers were in use on the navigable stretches of these streams, ranging from the towns of Moab and Green River down to the Confluence and back, and also in Glen Canyon, where placer miners had been working the sandbars ever since Cass Hite’s discovery of gold there in 1883. 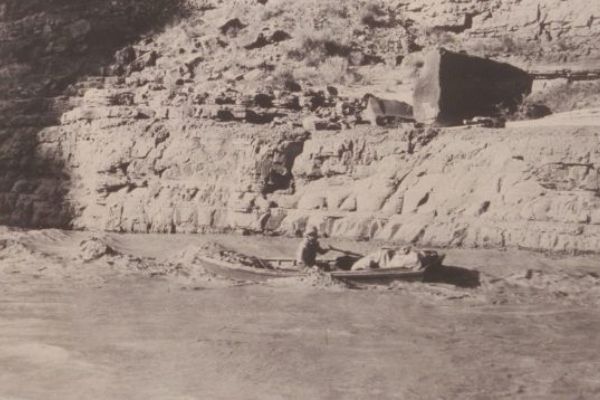 What separated these stretches of river, and prevented commerce between them, was Cataract Canyon. Its raging rapids had deterred all but a very few from duplicating John Wesley Powell’s pioneering voyages in 1869 and 1871. Bert Loper, a peripatetic miner from Missouri who had been drawn to Utah in 1893 during a brief gold rush on the San Juan River, was one of the few who had made it through Cataract in the early days without serious mishap. His testimony in the 1929 Colorado Riverbed Case (see River Currents, April 14, 2022)  made it clear that Cataract’s rapids would never be navigable to ordinary boats—or ordinary boaters. 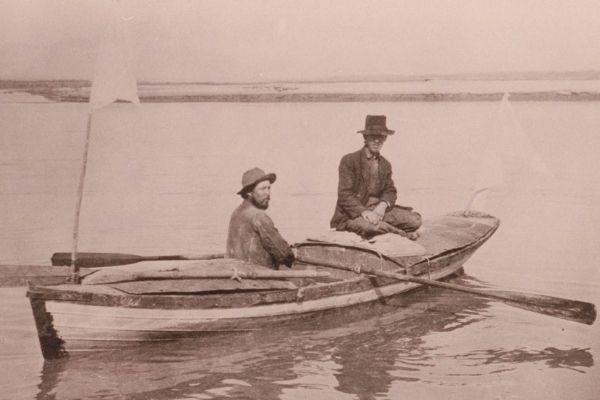 In September 1907 Loper and two of his fellow miners, Charles Russell and Edwin Monett, set off on a prospecting trip from Green River, Utah, having purchased three sturdy, sixteen-foot-long keeled wooden boats which featured a steel skin and waterproof bulkhead compartments. These were unwieldy craft to maneuver through Cataract’s boulder-filled rapids, but the three adventurers had one big advantage over Powell:  they were using the stern-first method of rowing,  in which the oarsman faces downstream and pulls against the current, positioning the boat for the best run. Loper had learned this technique on the San Juan and employed it in Cataract, where he took all three boats through the more difficult rapids. The method is usually attributed to Nathaniel Galloway of Vernal, but river historian Brad Dimock maintains that Loper and others may have come up with it independently (see Dimock, The Very Hard Way: Bert Loper and the Colorado River, Fretwater Press, 2007). 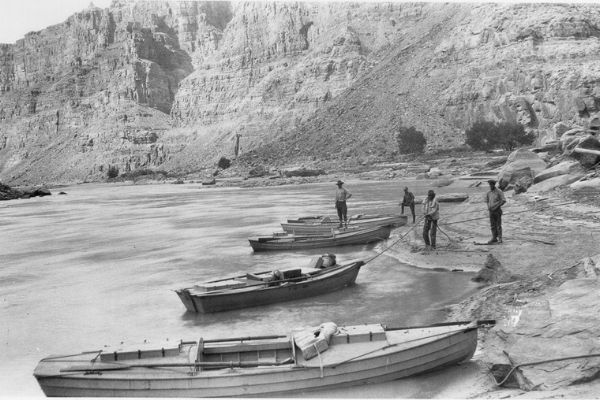 Wooden boats used by the U. S. Geological Survey in their survey of damsites on the Colorado River, 1921. National Park Service photo.

Loper’s testimony makes clear the difficulties he and his companions faced in the Big Drops of Cataract. “We struck numerous rocks in the rapids, but we only portaged one rapid, boats and loads and everything,” he stated. Running what was then known as  Rapid 16–“a bad one”—he observed that “we got over that nicely; I struck a rock, my boat went completely under the water, but it was made so it came right up and went on; no trouble at all.” 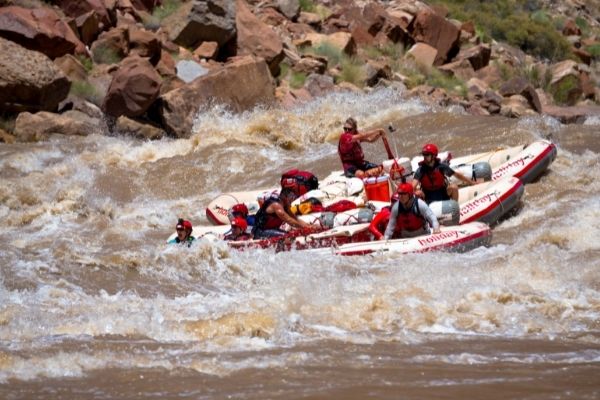 Loper explained to a disbelieving hearing examiner why he actually preferred to run the larger waves: “If your boat is sixteen feet long and your waves five feet high and ten feet apart, your boat is up on one wave when you hit the other wave, so being up on this wave will naturally make you get under the next wave; that is what smothers you. If you have got waves eight feet high and sixteen feet apart, your boat will ride them all without taking any water. Those waves twenty feet high, in [Rapid] No. 4, I never took a quart of water.” Loper clearly knew how to “read” big water—a skill that only comes with experience.

After running Cataract and prospecting a little in Glen Canyon with his companions, Loper returned to the village of Hite to send his camera out for repairs. When he reached Lees Ferry more than two months later, Russell and Monett had gone on into the Grand Canyon, leaving Loper with no choice but to laboriously tow his boat clear back to Hite, an incredible feat done in the dead of winter. His erstwhile companions completed their voyage at Needles, California, in February 1908, having lost one of their boats in the Canyon. 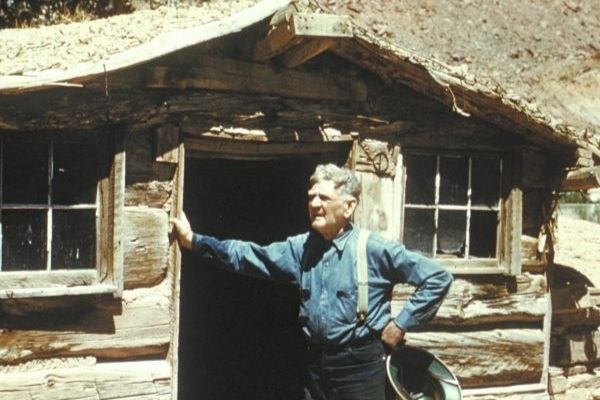 Undeterred by this experience, Loper went on to take part in some of the most significant voyages down the Green and Colorado, including the Grand Canyon. Though he wrote no books nor did much to promote himself, he gained a deserved reputation as the grand old man of the Colorado. “I lived with that river so much, it pretty near became a part of me,” he told the court in 1929. “I would sit on the banks and watch it; I would boat it; I would do everything; about the only companion I had.” Well, not quite—his wife, Rachel, was his steadfast partner for twenty-five years, although she did not participate in his more adventurous trips.

Like anyone who feels the pull of a wild river, Bert Loper found his way back to the Colorado again and again, until a last voyage through Marble Canyon in 1949 at the age of seventy-nine ended with his death while at the oars, possibly from a heart attack. His boat washed up on shore seventeen miles downstream and remained there, a fitting memorial to a man whose love for the wild rivers of the Colorado Plateau never diminished.