The ‘Why’ Behind our Land Acknowledgements 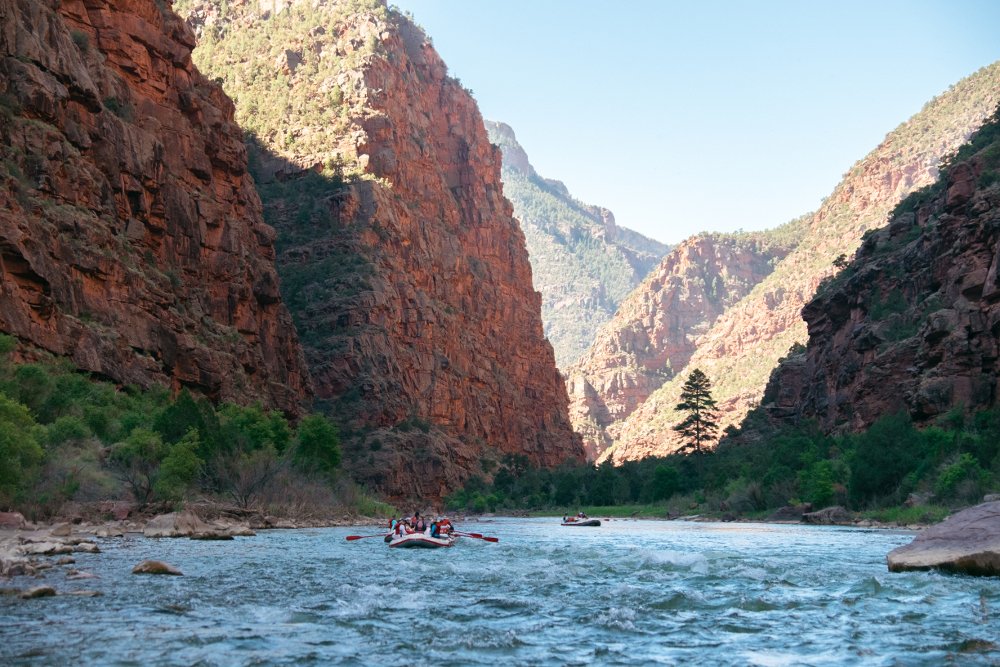 The Why Behind Our Land Acknowledgements

When I first started hearing land acknowledgments they were not so polished, lifted off the tongues of uncomfortable white friends in grassroots organizing circles. Our Native group members had asked us to make space for decolonization in our climate organizing work; this was one small way it began. These friends were trying to make space, in a colonized world. They were trying to re-center the voices of indigenous peoples in the present.

Land Acknowledgments have recently become far more prevalent (and eloquent) than the painfully awkward beginnings. They have hit this new level of awareness primarily through social media (Here is an example of our friend Tori’s Instagram). Land Acknowledgments are “a formal statement that recognizes and respects Indigenous Peoples as traditional stewards of this land and the enduring relationship that exists between Indigenous Peoples and their traditional territories”(Source). With the increasing size and visibility of Indigenous movements and campaigns (Idle No More, MMIW, Standing Rock, or Land Back to name a few), the world has been waking up to an enduring truth. We are—most of us at least—on stolen lands.

Acknowledging the land, and the peoples of the land, is nothing new to most native communities across Turtle Island; it is second nature. Every new introduction is framed in the context of their family, clans, and indeed the lands of which they are a part. Acknowledging that connection to the land is a fierce act of remembering. It stands in defiance of the historic re-locations and cultural genocides that have continued well into my millennial lifetime. 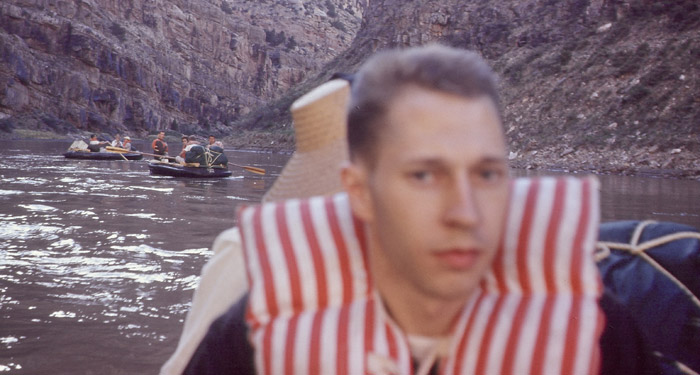 My grandfather and grandmother started Holiday back in the mid-60s. It was considered a golden age for whitewater rafting: “The Good Old Days” when trips spilled out of the back end of Ford box vans when the food was much simpler, everyone slept on the sand without tents, and the guests might even end up on the oars through the whitewater. It was also almost entirely white. Only a few years after Holiday started running river trips the American Indian Movement began. Calls for justice for Indigenous peoples grew loud enough to cut through the generations of erasure.  Yet that was not a visible part of the stories we tell about river running history today.

In my younger years on the river, we frequently talked about indigenous cultures but typically in the past tense. After all, these river and bike trips were taking us through traditional ancestral lands. Even today many of our side hikes are to visit sacred sites, with artifacts, granaries, pictographs, and petroglyphs from indigenous peoples who were removed from these canyons long before we arrived.

Dee, my grandfather and Holiday’s founder, was acutely aware of the many diverse tribes who still inhabit the Colorado Plateau and formed multiple meaningful friendships with tribal leaders over his years of river running, including a lifelong friendship with Ute elder and spiritual leader Clifford Duncan. Dee would weave stories of the modern Ute, Paiute, Shoshone, Puebloan, Hopi, and Diné peoples into his interpretive talks. However, that still didn’t fully translate into the interpretive program more broadly. 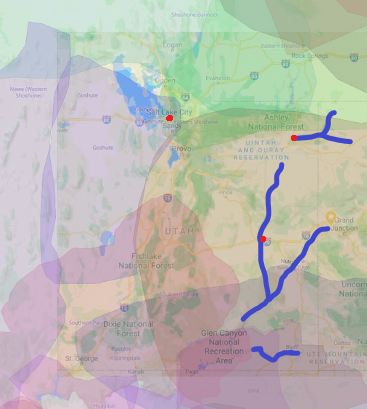 This incomplete version of the land’s story, while incredible and humbling on its own, can inadvertently serve as an injustice to the living indigenous peoples who are still here, active participants in the world we all live in. Focusing on only the ancient past, without conscious context can play into one of the most destructive tools colonization has used against native communities: erasure.

This cultural erasure is not some abstract theory; it began with actual genocide, then the stealing of lands. The erasure continued with cultural genocide. The United States government separated native families and brought up the youth within the colonized walls of boarding schools or in white homes. This literal erasure continues to this day. We omit and forget the existence of Native communities in how we talk about where and who we are, rarely using indigenous names for the lands we occupy and visit.

This process of erasure persists through our shared silence; it, like so many arms of white supremacy, thrives through our inaction…

What We Are Doing About It 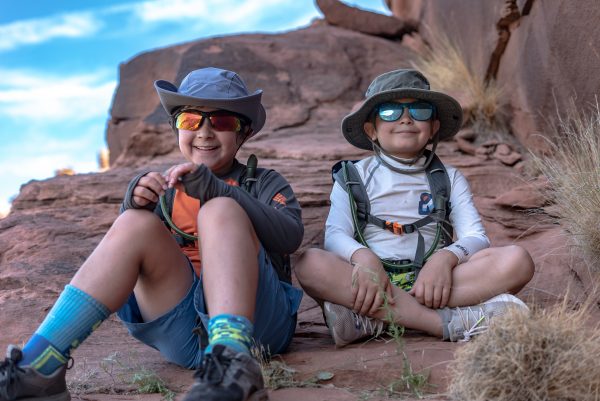 That is why Holiday has decided this is one place among many we want to intervene. Land acknowledgments are a gesture; a few words here and there to “un-erase” the original people of these lands. At Holiday we are starting with a simple phrase on each post, indicating whose lands the media was taken on. This is a moment in which we choose not to do nothing.  Land acknowledgments are a small thing, but many small things over long periods of time done by many people can be quite powerful. We want to be part of that growing wave.

Apart from land acknowledgments taking place online we are also committed to other changes as well. This includes adding acknowledgments on our trips as we travel through and on those lands. For many years now Susan Munroe, our head of interpretation, and I have been re-thinking how we train our team of guides. To retool how we speak about the land we are on and the Tribes that still exist on and around them. Informed by our own relationships with tribal elders and friends, we are re-framing stories related to sovereignty, environmental justice, and sacred places.

Holiday has also intentionally moved away from talking about these canyons and plateaus as places somehow separate from humans. We instead strive to talk about them as inhabited areas in an effort to complicate the narrative of humans being separate from their environment. That concept alone has done untold damage to the way we think about public lands and what they mean to the American story.

We look forward to continuing our relationships with existing Tribal Nations whose diminished 21st-century territories border the river trips that we run. This includes the Ute lands that border the east side of Desolation Canyon. And also the Diné lands that make up the southern border of the San Juan River.

Moving Forward as we Ask Questions 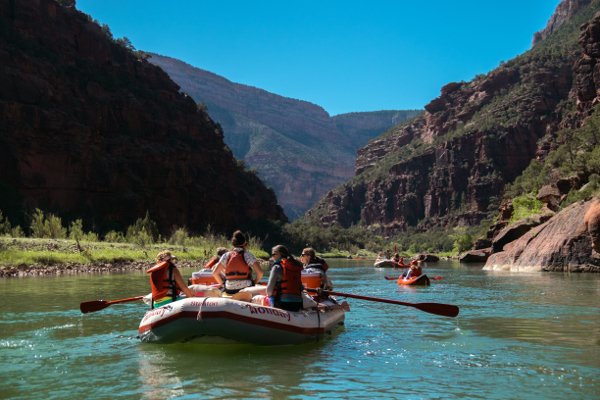 We have much work to do as we move toward a less colonized approach to operating on these stolen lands. But we are excited to take this next, small, intentional step.  I personally make mistakes every day attempting to do things in a better way.  I don’t always succeed. As I said, those first few years of land acknowledgments were sometimes awkward. But I believe what is important is not being perfect but the “doing of the thing.”

It is in that spirit of trying to do things in a good way that we invite all of our wonderful Holiday guests and guides to join us.  This “Native Land” resource acknowledges that it is still a work in progress, but we’ve found it to be a useful place to start one’s journey to learn more about the native lands on which we all stand. 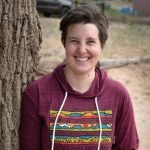 About the author: I have been a river runner my entire life.  It was learning from the Holiday boatwomen and men of the 1990s that led me to find my own oars. I have been a guide for Holiday River Expeditions since 2009. In my spare time, I work as the Green Riverkeeper Affiliate with Living Rivers & Board Chair of the Utah Chapter of the Sierra Club. A life well spent organizing communities to protect the rivers and lands I love.  I find that the lessons from the river inform my climate justice work and truly all aspects of my life.