The Wade and Curtis Cabin at the Lodore Boat Ramp 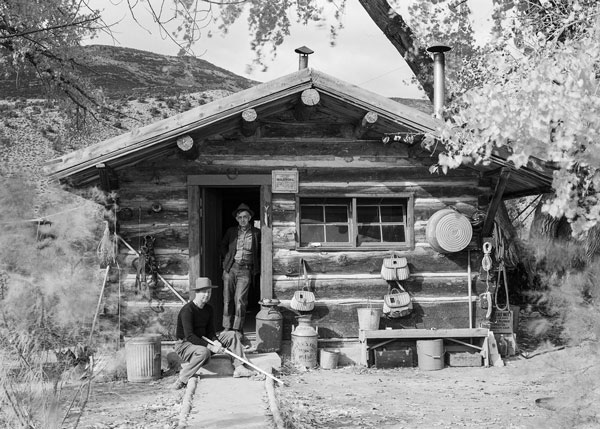 In Dinosaur National Monument, as you drive into the Lodore Canyon launch site you will go by a log canyon adjacent to the river.  The Wade and Curtis cabin at the Gates of Lodore was built by Jack Langley in 1928 on his homestead.  He made it from ponderosa pine logs cut from the Southeast side of Zenobia Peak. 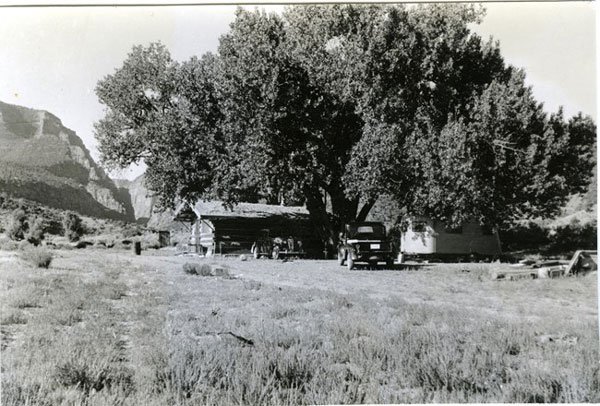 Around 1905 a road had been built into the area by the federal government.  As travelers into the area increased and game hunting was good, in 1933, John Grounds and Jim Crozier conceived the idea of a tourist camp in the Canyon of Lodore. In order to fulfill this dream, they partnered with Jack and rebuilt his cabin where it currently stands. John, Jim, and Jack were good friends and all of their families had homesteaded on Douglas Mountain, some starting in the 1870s.

John Wade and Walter Curtis ran the day to day operations at the camp for some of its existence.   Curtis was John Grounds’ brother in law and Wade had herded sheep for him. Though the cabin is now associated with them, neither actually owned any part of it.

A second cabin was built down river with the same cut and dimensions as the original and they operated “pleasure boat trips” between the two. During the height of operations the tourist camp included horses, a garden, four motor boats, and even a Texaco gas station.  The camp was one of the first tourist operations in the region and attracted people from all fifty states as well as many overseas destinations. 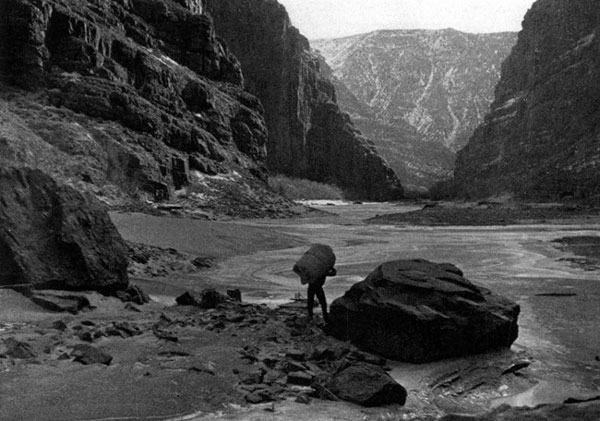 In order to create interest in their business, the partners hired a local photographer by the name of Reginald “Rex” Gill to take photos of the canyon country that could be sent to newspapers all over the country. Rex had previously surveyed for the General Land Office in the area and jumped on the opportunity. He took two separate trips, one in 1929 and another in 1933. Jim Crozier accompanied Rex on the epic second trip where they spent a month and pulled a sled down the frozen Green River until they encountered the first rapid and traveled on foot overland to Echo Park from there.

The Upper Wade and Curtis Cabin was actually moved within the boundary of the newly expanded Dinosaur National Monument. The rustic building served as a guest lodge and ranger station, and is listed on the National Register of Historic Places as the oldest remaining guest accommodation in the park.  The two-room log cabin rests on a concrete slab and has a front gabled roof with exposed purlins. 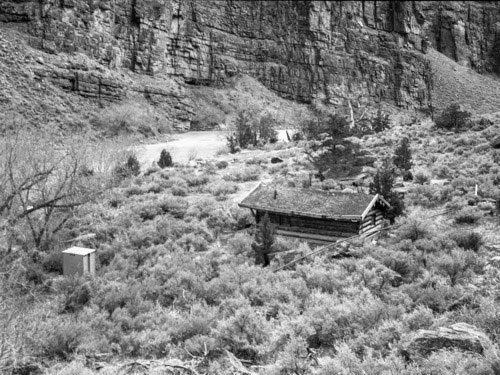 The Lower Wade and Curtis Cabin was located just above Winnie’s Grotto, at today’s “Wade and Curtis campsite. Guests would stay at this cabin overnight; its amenities included a strawberry patch and a phone line that was used to communicate between the two cabins. Unfortunately, it was destroyed by a campfire left unattended by boaters in 1969.

In 1934 the John Grounds cabins and tourist business as well as several mining claims were found to be in trespass on federal lands in Dinosaur National Monument.  The team investigating the Monument in 1945 were surprised to find Mr. And Mrs. Henry Smith at the cabin.  They could see a large summer garden, many chickens, a few turkeys, four or five Cocker Spaniels and a supply of venison hanging from the cottonwood tree.  Smith said that he had good success with his corn, potatoes, melons and other garden vegetables even though he was late in planting.

Smith told the rangers that it was Gene Carr’s place who had given Smith permission to occupy and farm the place without rent.  Smith came to Lodore on May 27, 1945 after being employed in the resort business in California.  “It was truly a picture of plenty in a land of peace – some might think a little isolated perhaps.  We declined with sincere regret Mrs. Smith’s invitation to eat with them.  That was a difficult decision, especially so with delightful odors of cooking food coming from the cabin through the open door…” 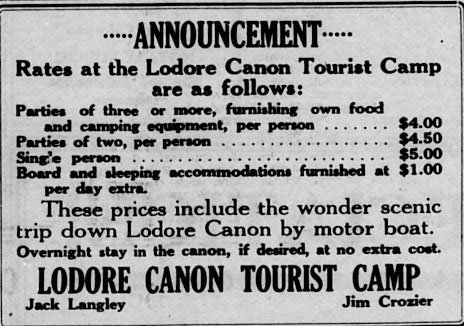 The ranger’s report reads: “It is possible to drive one-third of a mile south from the cabin.  The road ends at the bank of the river in a spot sheltered by two large boulders and a cliff.  From the top of the cliff photograph in Figure 2 was taken…”  “It was evident that the area at the end of the road has been used frequently as a picnic place.  The Custodian was “lectured” on the subject of keeping his monument clean. (**) After the “lecture” we assisted him in burning the rags and papers, and disposing of the tin cans.”  “It should be understood that the Custodian did not take the lecture too seriously in view of the fact.  The Report went on: “It is hardly expected frequent patrols can be made to the north end of the area.  The Monument Custodian should have more help.  We should consider developing a small picnic area and campground” in this area.  Upon talking with Mr. Smith, the team learned that steel boats had been used to traverse the first six miles of the spectacular Canyon of Lodore, and they thought that was a great idea.  Doerr wrote, “I am confident that familiarity with it (the Canyon) would stimulate interest in preserving its bold character from alteration by reservoir development.”

The team discussed the trespass case, and consideration for having Smith apply for a concession permit and act as Custodian of the area.  It is unclear if that ever occurred.  The last person to live in the cabin was in 1998 when a Volunteer in the Park cleaned the cabin up and lived there for several summers. 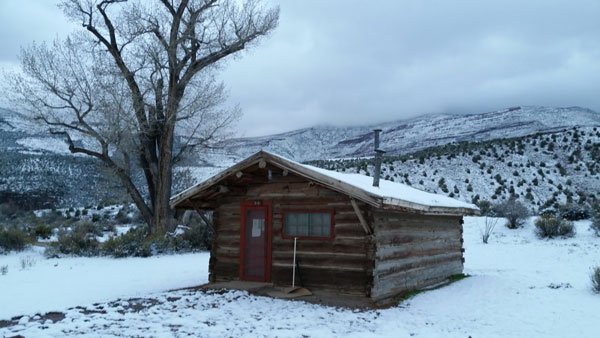 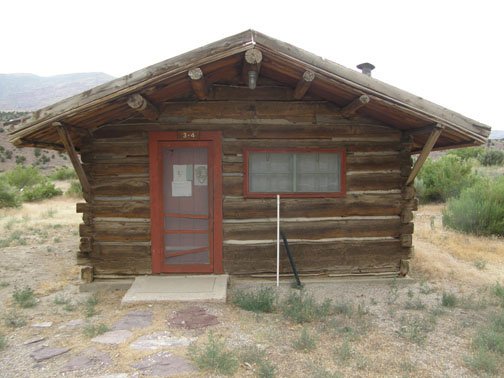 – During the early 1940s David Canfield, the Superintendent of Rocky Mountain National Park who then supervised Dinosaur National Monument, ordered a survey of the recreational opportunities Dinosaur had to offer. This picture was taken on one of those trips in 1941.

*This photo was taken on October 21, 1951 by George A. Grant. The person standing in the door is Earl Cormack and the person on the step is David Canfield.  Grant was the first Chief of Photography for the NPS originally hired by Horace Albright and Canfield was the Superintendent of Rocky Mountain National Park, who at the time supervised Dinosaur. The fishing camp theme seem here was most likely staged as the cabin was already being used by the NPS.  Photo NPS/George A. Grant