The Photo Diary of a Whitewater River Rat: Part 2 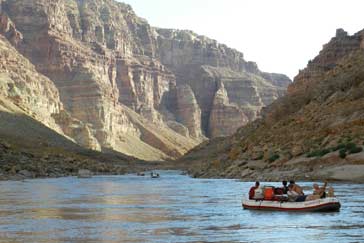 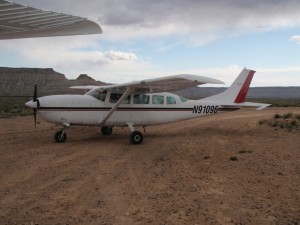 The Photo Diary of a Whitewater River Rat: Part 2. It’s pretty awesome to be up on Tavaputs Plateau to welcome guests to their upcoming Desolation Canyon trip after they’re flown in from Green River.  It feels like you’re touching distance from these quick little single-prop planes as they execute practiced and perfect landings atop the mighty Tavaputs.  As a former Holiday employee once told me, ‘Planes are so cool.  Everything they do is like a skateboarding trick.’ 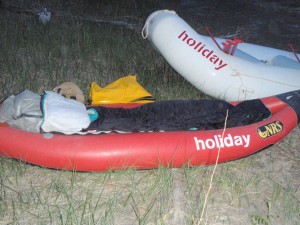 Here we have a sight seldom documented in the annals of river photograph history.  The red, inflatable kayak is a ‘ducky.’  They’re great fun for even novice kayakers to take out on the river and offer high maneuverability, not to mention the chance to do your own thing.  At night they can double as comfy beds under clear skies; this setup is known as ‘the coffin. 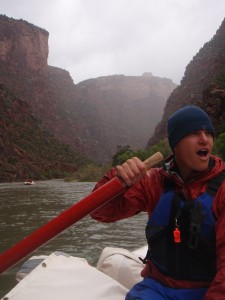 A serene stretch of the Yampa River.  You may notice the multiple layers, which seem counterintuitive for warm-weather trips.  Every guide has a story involving a freak weather pattern that took them by surprise; this was mine.  In late June of 2009, it actually snowed on us on the river, and for four days I wore literally every single item of clothing I had on the trip.  When it didn’t snow, it rained, and I often woke up in my tent with standing water INSIDE with me.  Fortunately, this is the only time such a weather occurrence has happened… so far. 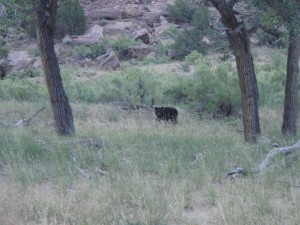 That little fella is a hungry black bear.  I use the term ‘little’ very loosely; although the perception via the photo might suggest otherwise, this bear was easily as big as me.  About halfway through an extended trip, I awoke to the sound of air horns in the camp downstream from us.  For a split second, I grumbled and assumed it was some kind of joke, until I fully awoke and remembered that most commercial trips carry aptly-named ‘bear horns.’  I looked downstream to see this guy ambling out of their camp and heading towards ours.  After grabbing our own bear horn and bear spray, myself and my fellow guides formed a line between this bear and our kitchen (which he undoubtedly wanted to access).  This was the closest he dared to get, although it was certainly plenty close for us.   He eventually decided we weren’t worth the trouble and took off up the canyon.’ 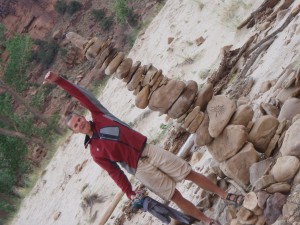 A ‘cairn’ is a small pile of rocks used to indicate that you’re on the right path for a hike.  In this particular instance, some of our Burn Camp kids decided to take cairn-building to a new level.  I stand about six feet and a hair tall, so you can tell from the photograph’s scale that this cairn is probably approaching eight feet or more.  Not bad.

An inevitability of trips involving kids is the water fights.  When you’re dealing with experienced water warriors who will stop at nothing to achieve victory, things can get ugly.  This was only one of many times I was left bleeding after a water fight gone water war. 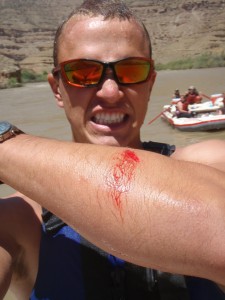 Speaking of medical issues… this shot was taken by Burn Camp’s Brad Wiggins.  Fortunately the medevac was not for our trip.  However, a kayaker on a private trip downstream from us sustained a fairly significant hip injury and was in shock; he had to be airlifted out.  Fortunately these AirMed pilots are very, very good at what they do and he was taken to get the advanced medical care he needed with no further issue.  It was pretty impressive to see the flying done by the pilots and expertise of the medical staff. 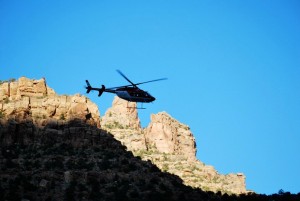 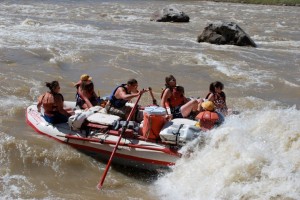 I’ve mentioned bracing and rowing technique before.  As the adage goes; ‘when in doubt, square it out.’  This refers to lining up your raft so that it goes nose-first into waves and ‘holes,’ giving the craft maximum stability.  Bracing means keeping the blades of the oars in the water to sustain forward momentum, as big waves can easily halt or toss a craft even when it’s fully loaded with gear and people.  This shot was taken in Three Fords rapid, in Desolation Canyon. 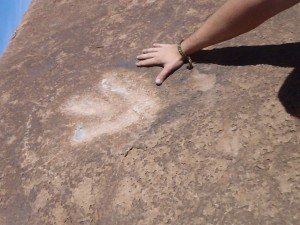 Not far from our southern Utah base in Green River is the former mining town of Moab, which now makes its name as an outdoor recreation capitol.  Along the river road, you can access real dinosaur prints (not far from the put-in for our very own Cataract Canyon trip, on Potash Road). 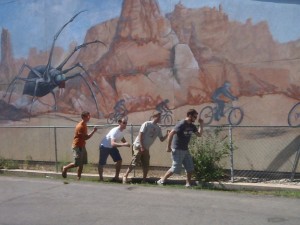 Once you get into the town of Moab, whether you’re a novice mountain biker or a crafty veteran, there’s plenty to keep you entertained.  Poison Spider bike shop famously adorns the side of their building with an impressive mural featuring a giant arachnid chasing cyclists (they’ve since updated the mural).  Some friends and I added our own flavor to the shot on a camping trip there. 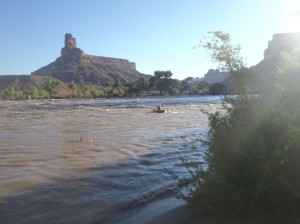 A central and recurring image in desert culture is the prominent rock formation seen to the left of this photograph; it’s Gunnison Butte, and it’s right by the take-out for Desolation Canyon trips.  That brave soul venturing out into Swasey’s rapid is in a ‘ducky,’ or inflatable kayak.  They’re available for rental during river trips and often make a fun break from the oar rigs. 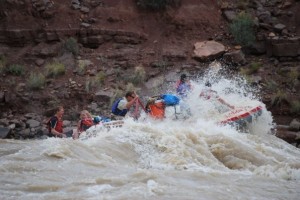 A phenomenon that few get to experience but many dream about is witnessing the formation of a new rapid.  This was taken at Cow Swim rapid in Desolation Canyon, a matter of months (or even weeks) after a flash flood blew debris and rocks out of a wash and into the river, forming a significant wave train where there had once been a relatively tranquil bend in the river.  It is an impressive and strong reminder of the power nature wields.

A throwback to my first year.  After watching the climbing movie King Lines, which features prominent shots of deep water soloing (climbing without a rope over water) a fellow warehouse worker and I were convinced that we needed to try this new discipline.  We roamed up and down Potash Road until we found what seemed like a suitable spot on the river.  After dragging the river bottom with rocks and ropes and sufficiently convincing ourselves we wouldn’t be impaled by any submerged trees, we climbed away. 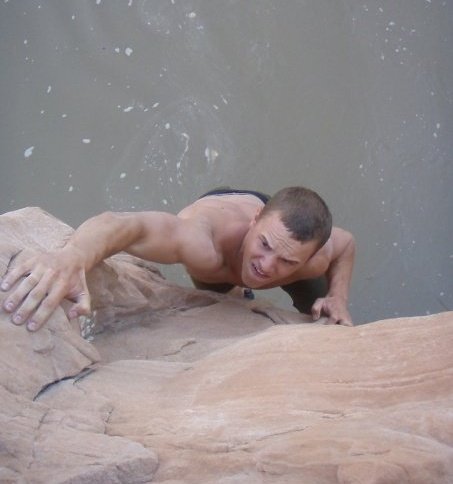 He began guiding with Holiday in 2008 and has enjoyed the unique privilege of getting involved with Holiday’s youth trips, including the University of Utah Hospital Burn Camp program. His writing has been featured on various outdoor online communities including mountaintechs.com and backcountrybeacon.com. Joe works with troubled teens full-time but manages to find trouble around the country and world in his freetime. He is an outdoorsman by trade, a romantic by choice, a guitarist in a band, and an outlaw in Europe.