“The Law of the River” 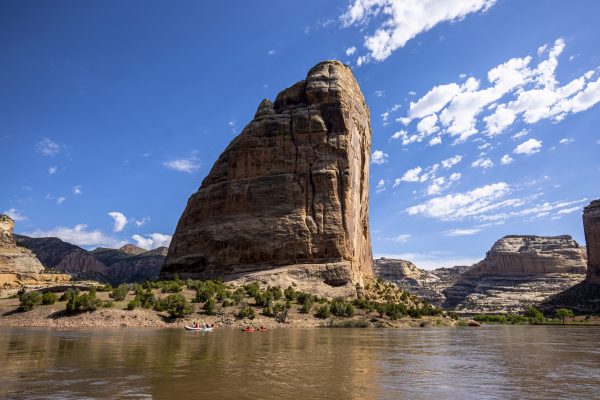 The second in a four-part series on water law and allocation in the Colorado River Basin. By Rica Fulton 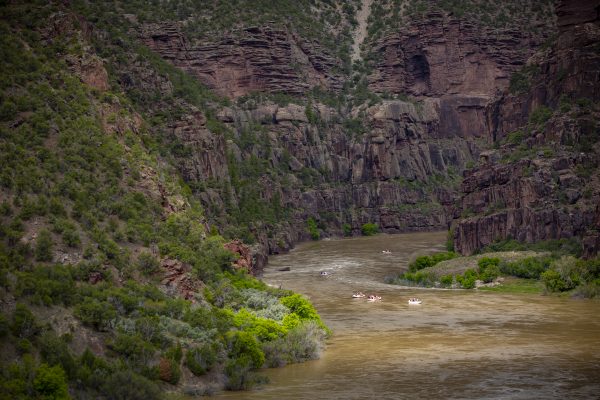 Most fundamentally, the Compact divided the Colorado River Basin into an Upper (WY, CO, NM, UT) and Lower Basin (AZ, CA, NV) giving them each 7.5 million-acre-feet. The Upper Basin, however, has to deliver the entire 7.5 million-acre-feet (or 75 million-acre-feet every ten years), before they can use their share. The Compact allocation scheme also supersedes the prior appropriation doctrine on any water rights in the Colorado River Basin AFTER 1922, if there is ever a need to take shortages in order to deliver water to the Lower Basin. Water managers refer to this event as a “Compact Call,” and it has yet to occur. 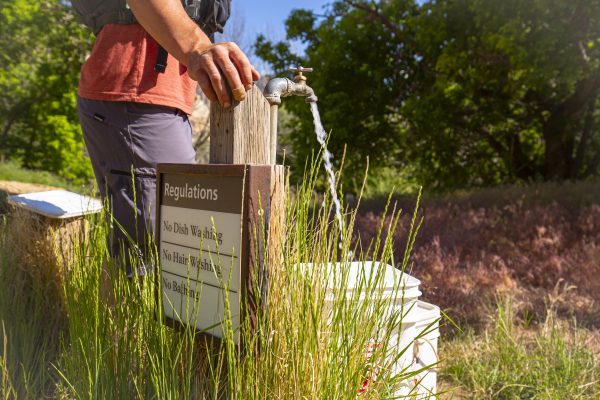 Jeffersonian notions of an agrarian society, and the yeoman farmer popular in the early 1900s, inspired many early natural resources laws, such as the Colorado River Compact. Pioneer minds held an image of modest family farms, generating crops and supporting cattle on a small scale. However, innately arid conditions mixed with rapid technological advances during the industrial revolution, and the rise of corporate agriculture, triggered a shift in how Western society treats water.

In the decades following 1922, numerous other federal laws, agreements, statutes, compacts, policies, and an international treaty were required to solidify who was able to benefit from water in the Colorado River Basin, and where it went, based on the evolution of our quickly changing society.

Without discussing each and every aspect of the Law of the River, various laws, statutes, and treaties govern the allocation between states, with Mexico, and determine infrastructure and operations. Further sets of environmental laws also impact the Law of the River.

Another important aspect of the legal framework concerns Native American tribes, which will be the sole focus of the subsequent article in this series.

Allocation in the Upper and Lower Basin States 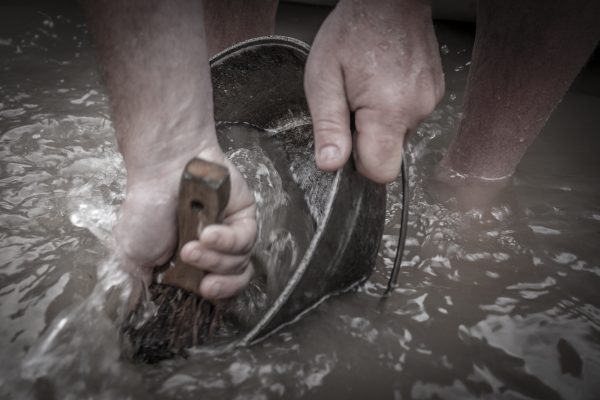 The Secretary of the Interior Department intended that the Upper and Lower Basin States negotiate how to divvy up water from the Colorado River and its tributaries amongst themselves. In 1948, the Upper Basin states did just that, and negotiated the Upper Colorado River Basin Compact. A percentage-based allocation scheme was used to allow for uncertainty in water years. Colorado receives 51.75%; New Mexico 11.25%, Utah 23%, and Wyoming 14% of the water available after delivering the Lower Basin and Mexico their shares.

Conversely, the Lower Basin states could just not agree on an allocation scheme. Therefore, a series of lawsuits, Arizona v. California, drive how much water California, Arizona, and Nevada receive. California is allocated 4.4 million-acre-feet; Arizona 2.8 million-acre-feet; and Nevada 300,000 acre-feet. Notably, tributaries in the lower basin don’t count towards these totals, whereas tributaries in the Upper Basin do.

Further complicating things, in 1968 the Colorado River Basin Project authorized the Central Arizona Project (CAP). The CAP is the most expensive water transfer project in history to be completed in the United States. The legislation authorized the construction of a 335 mile-long aqueduct, sending water from the Colorado River to the Phoenix area. For Arizona to receive such a massive project funded by the federal government, they agreed that California be allotted their entire 4.4 million-acre-feet before the CAP transports ANY water in times of shortage. This is already coming to fruition, and CAP users in the state of Arizona are taking cuts that will likely never be recovered.

In 1944, the Treaty with Mexico was signed to provide a set amount of water to Mexico from the Colorado River. The Treaty allocates Mexico 1.5 million-acre-feet each year, equally from the Upper and Lower Basins. After an earthquake in 2010 that destroyed a good portion of infrastructure in Mexico, Minute 319 was signed, which allows Mexico to store water in Lake Mead to use in subsequent years. Minute 319 also allowed the two countries to work together to find water and implement a plan to allow the Colorado River to once again reach the delta in the Sea of Cortez. 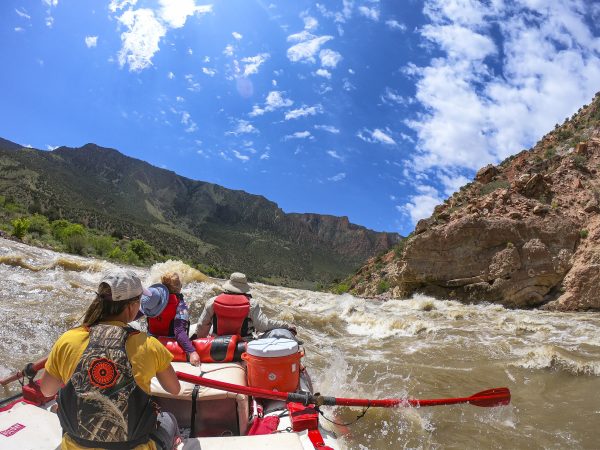 The mighty Colorado was once wild, variable, and dynamic; but colossal dams have turned the entire Colorado River system into a regulated water transportation system. Allocating federal funds towards water projects inevitably requires legislation, and three notable laws drive federal water projects and who benefits from the storage.

The Boulder Canyon Act was the first major piece of infrastructure legislation passed in the Colorado River Basin in 1928. The Act authorized what is now Hoover Dam, as well as the All-American Canal, which sends water to the Imperial Valley of southern California for agriculture. California lobbyists and the power of California at the federal level pushed the Act through, setting the stage for California’s power over the Colorado River. Further, setting a precedent for large-scale dams elsewhere in the Basin.

In 1959 the Colorado River Project Act was passed through Congress. Four major facilities were a product of this legislation in the Upper Basin: Flaming Gorge Dam in Wyoming and Utah; Aspinall Unit, a series of three dams on the Gunnison River in Colorado; Navajo Unit on the San Juan River in Colorado and New Mexico; and perhaps the most controversial – Glen Canyon Dam. Comprehensively, these projects allow the Upper Basin states to store water, be able to provide the Lower Basin water, provide flood control, and generate hydropower.

As mentioned earlier, the Colorado River Basin Project Act of 1968 was passed predominantly to authorize the Central Arizona Project, bringing water to central and southern Arizona. Additional smaller projects were also embedded in the legislation, such as the Dolores Project, which authorized McPhee Dam on the Dolores River in Colorado.

In 2007, pursuant to the Boulder Canyon Act and Colorado River Basin Project Act, the Colorado River Interim Guidelines for Lower Basin Shortages and the Coordinated Operations for Lake Powell and Lake Mead, were developed. Prompted by Climate change, extended drought, and subsequent low reservoir elevations; mitigating a shortage declaration in the Lower Basin was a high priority. A shortage is called when the elevation of Lake Mead gets below 1,075 feet above sea level; currently, it is at 1,086 feet. A shortage declaration would force Arizona and Nevada to use less water. The agreement theoretically provides flexibility in the system and promotes coordination between water users to allow more water to flow into Lake Mead when Lake Powell’s water levels are at certain points – essentially providing a tiered approach in managing water between the two projects. However, the guidelines serve as merely a band-aid to the problem, and more long-term, holistic solutions must be passed in order to sustain the river system. 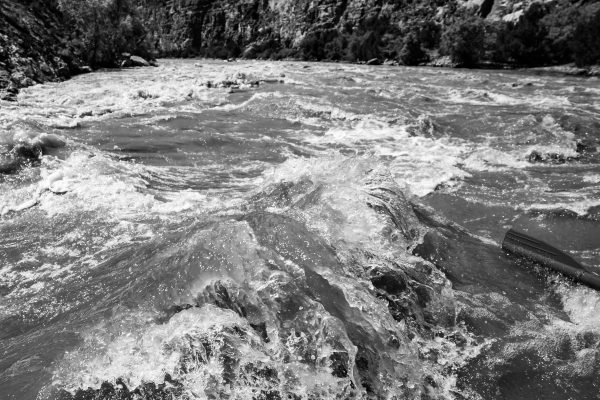 In the late 1960s and into the 1970s, a series of robust environmental laws were passed in the country that affect how water projects in the Colorado River Basin are operated. Most notably, the Endangered Species Act has changed operations of many water projects via the creation of the Upper Colorado River Basin Endangered Fish Recovery Program. The Recovery Program serves as Section 7 ESA compliance for thousands of water projects in the Upper Basin by creating flow recommendation plans (notably implementing spring peak flows to benefit native fish), purchasing or leasing water rights, installing infrastructure to benefit fish, and other actions. The four fish specifically include the razorback sucker, humpback chub, Colorado pikeminnow, and bonytail.

Other environmental laws impacting the river include the National Environmental Policy Act and the Grand Canyon Protection Act.

The sheer complexity of the Law of the River rivals quantum mechanics, with mind-bending and nuanced factors. Further, this article only scratches the surface of each of the components laid out here, as each piece is exceptionally nuanced. However, understanding each cog in the legal machine of water in the Colorado River Basin helps to illuminate how water is managed in the West.