The Doing of the Thing: Bloggers in Cataract Canyon 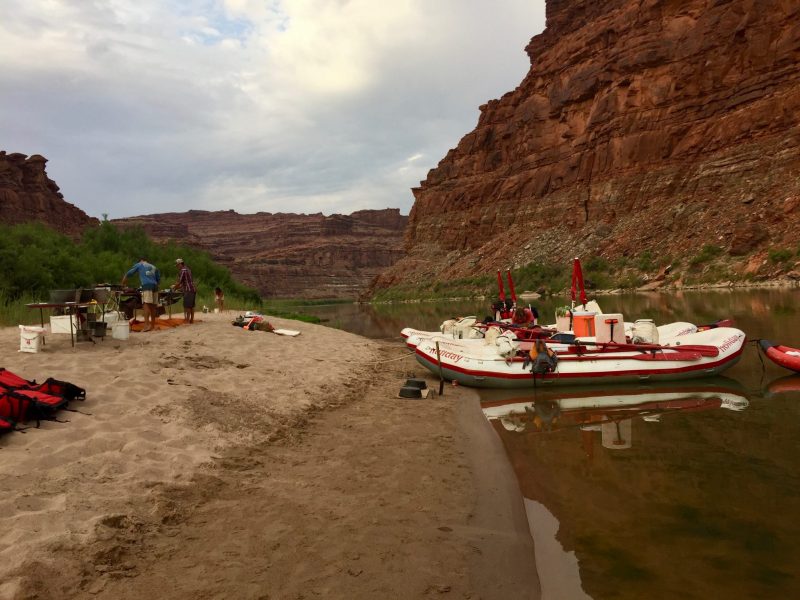 The Doing of the Thing: As I unpack my bags, there are constant reminders of the river. The neglected clothes that I stuffed into the bottom of my sack are still a bit mildewy; they smell like the river bank. Red sand is lodged between the pages of my library books. I hope that the Salt Lake Library, of all places, will understand that my hunger for books is entwined with my hunger for the outdoors. The skin on my face is a bit less pale than normal, and my hair more bleached. The stable ground still feels a bit too firm beneath my feet.

It’s really no small transition between the river and the city. That’s what I’ve realized after finally cashing in my most valuable perk as a Holiday blogger: a trip down Cataract Canyon.

We were eighteen people, in four boats, on two rivers, for one week. We went from our put in on the Colorado down to its confluence where it consumed the Green, and then further downriver into the ruckus waters of Cataract. In that span I learned a few things about what makes a Holiday trip so special.

Going with the Flow 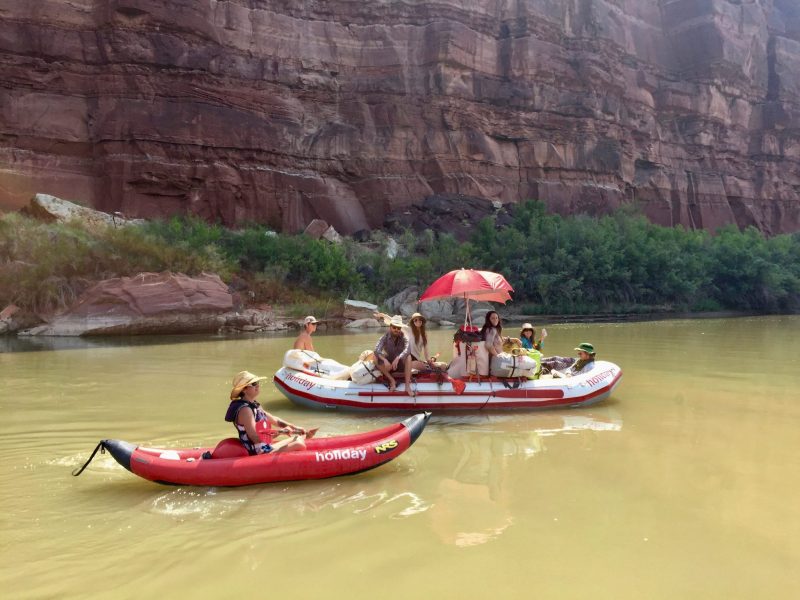 Driving down to our meetup in Green River I was witness to a veritable catalog of modern crises. The radio was tuned to NPR, which told me stories of political corruption, drug epidemics, and white supremacy. I was stopped along highway 6 and told to reroute because the flames from the Coal Hollow Fire were lapping against road. I am used to seeing the tenacious and barren Book Cliffs as I pull into Green River, but as I drove along I-70 this time, all I could see was smoke.

In short, I was really looking forward to this escape, to the cool water and lack of phone service.

After some preliminary logistics and a short drive, we were loaded onto our boats, and rowing away down the wide river. I took a deep breath in, and then I realized that relaxation would not be so easy.

This brings me to the first point I want to make about Holiday River Expeditions: they go with the flow. It is more than a catch phrase. While other river companies speed past us using gas-guzzling motors to bring them straight to the rapids, we were slowly paddling along, mile by mile. We would be on flat water for days before we saw a single ripple on the water.

These early, slow, days on the river were essential to me. I got to watch as the sky changed from smoky to clear, as the canyon walls slowly grew around us. A small herd of bighorn sheep watched us curiously from a cliff edge. A vulture stretched her wings. And, gradually, my breathing slowed, my mind cleared, and my bones loosened. By the third day, I was truly on the river. 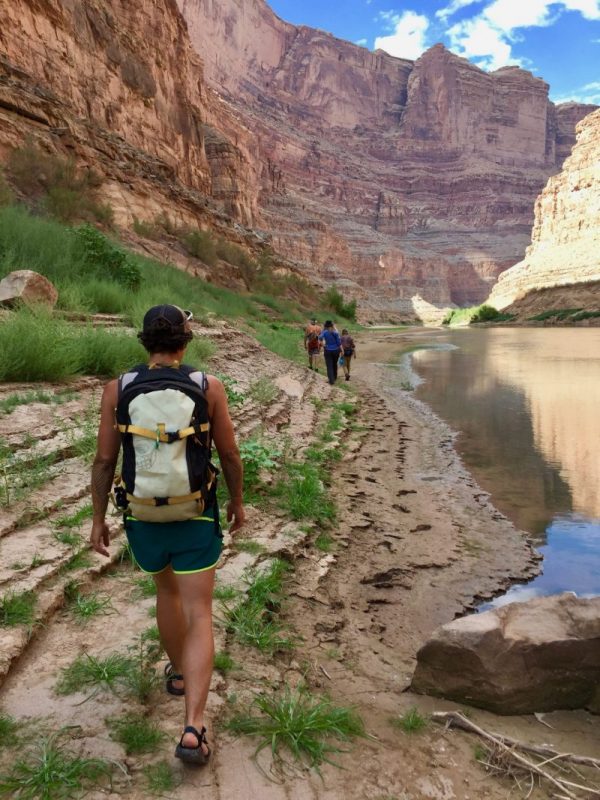 One of my comrades on the trip whispered to me at one point, “I thought river bros were, you know, ‘bros’. But I guess I was wrong.” I must admit that I’d had similar assumptions that were, thankfully, proven wrong again and again on this trip.

The outdoor industry is not without its own cultural hang-ups. You only need to look at recent scandals in the nearby Grand Canyon to see how issues like misogyny and harassment can permeate into even the most “chill” environments. This is particularly problematic given that high adventure activities require people to have a high degree of trust in their companions and, especially, in their guides.

The four guides that led out trip gave me a whole new impression of what it could mean to be a “river bro”. They were not river bros but river brothers, sisters, siblings. River friends. River mentors and river teachers.

Our guides would wake long before the sun rose to make us coffee, and they would be the last to turn in after doing the dinner dishes. They would row our boats tirelessly, pointing out their favorite banks of the river, telling stories about the old-timers. You could see the twinkle in a guide’s eye when they spoke about the hike they wanted to take us on later in the day, or the pictographs that were left by the Ancestral Puebloan people. They would ask us about our lives, too, as eager to listen and learn as they were to teach.

When we got to the whitewater there was a noticeable buzz in each boat: the stoke of each guide. But this was no reckless thrill seeking. It was like a ceremony, a spiritual journey that the guides wanted us to experience along with them. Only once everyone was safe and ready did we dive into the rapids. Jostling about the boat, grinning wildly, I felt the rare joy of a shared adventure, one that was only made possible by the well-rounded expertise of our friends, the guides. 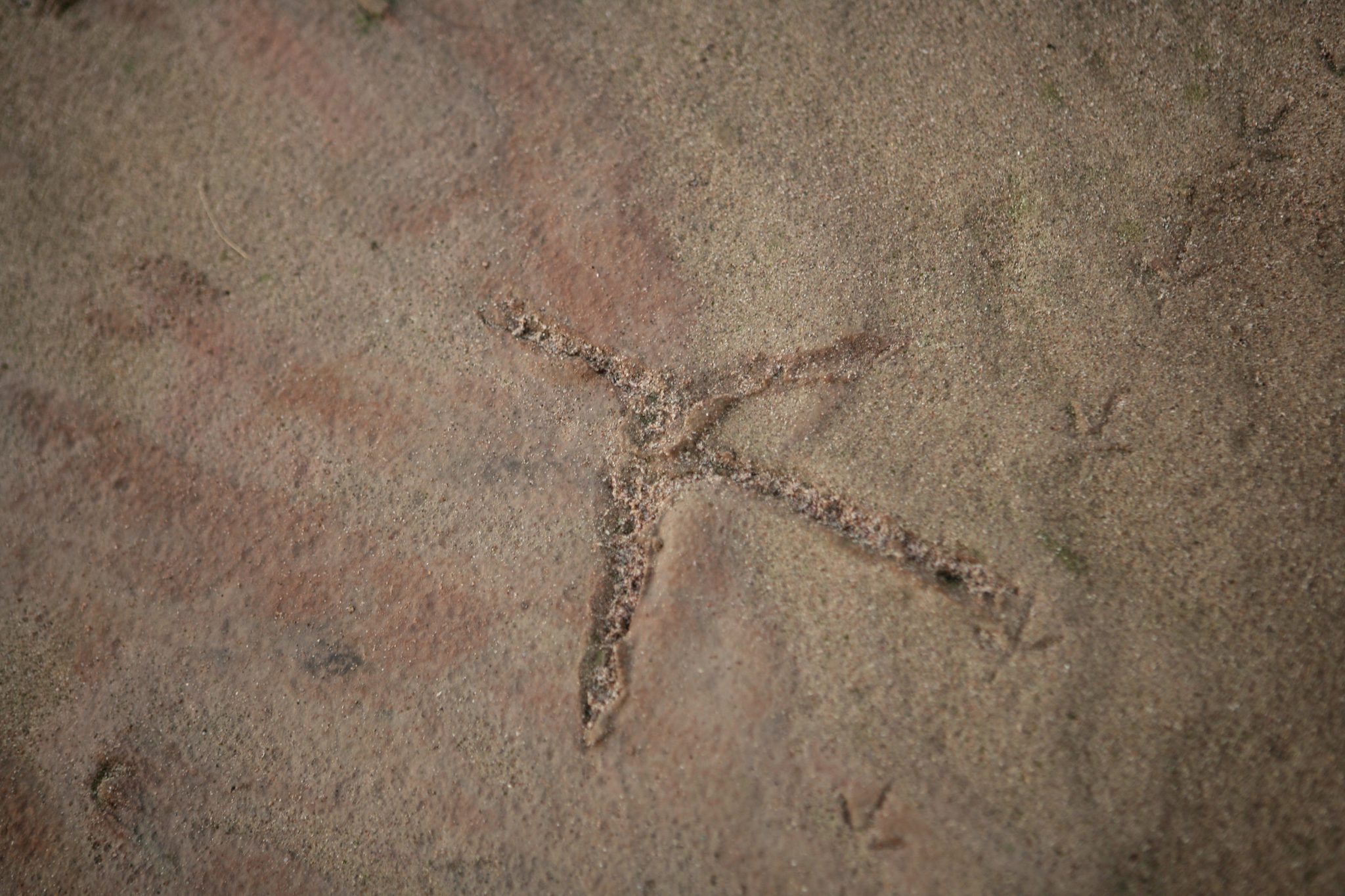 One of my fellow guests, a brilliant author and activist who shall remain nameless here, said to us at one point that “Rocks are strong, but water is stronger.”

It may be hard to understand this statement from wherever you’re reading this. But, when you’re on the Colorado, it’s clear: the water of that mighty river has worn down one of the deepest canyons in the world. It moves boulders the size of houses. It feeds roots that split the foundations of the earth.

On our last full day of the trip, we hiked a narrow side canyon. Once we got above the “Powell” formation” (a layer of compact silt left behind by the receding Lake Powell), we found shallow, mossy rock pools in the layers of sandstone and limestone. Tadpoles and dragonfly larvae squirmed about frantically in bowls hollowed by water. And when we looked closer, we saw more.

Fossils. Crinoids of all shapes and sizes; some small and round like lugnuts and others large, flowing leaves. A community embedded for millenia, persisting even where the rock has worn down.

We shared the wonder of the canyon together, climbing through the small caverns and playing ammeter paleontologist. But not for long. The billowing clouds of the summer monsoon that had been looming all day were beginning to roar. One drop on my shoulder, then another two atop my head. Then one hundred of them splashing on the surface of the little pools. It was gorgeous and thrilling. Side canyons like that are shaped and then reshaped by flash floods and the guides gently ushered our safe return to camp.

As we plodded back to our camp, I thought of all the layers of community we had witnessed in the canyon. Ancient crinoids, larval amphibians and insects, and then, of course, our own group. We had met each other just a week before, many of us strangers to each other. Now, we were making plans for future adventures together, exchanging ideas and books and contact information. Each of these communities built in the water, and stronger than rock.

Don’t trust me, as Holiday’s owner says, “you’ve got to go to know”.  Check out Holiday’s trip listings, now up on the website.