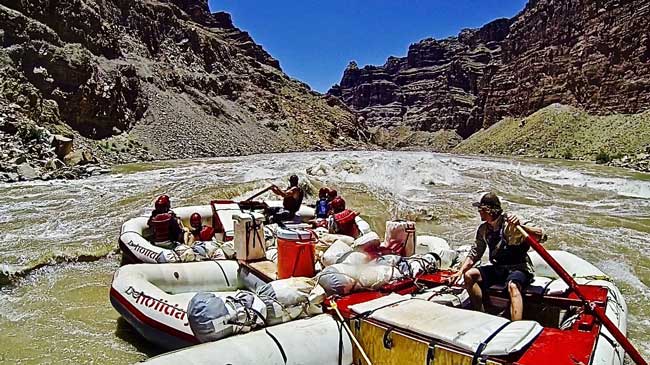 When we work together we are stronger. When we tangle together our fate as a collective group, rather than weathering the stormy seas on our own, we persevere. No, I am not about to burst into an old union song (although if I were to do that it would be Solidarity Forever by Leonard Cohen). I am trying to talk about triple rigs on the Colorado River, of course. And with this year’s sizable snow pack the Holiday guides are eager to break out the long oars for some high adrenaline, high water Cataract Canyon Trips! 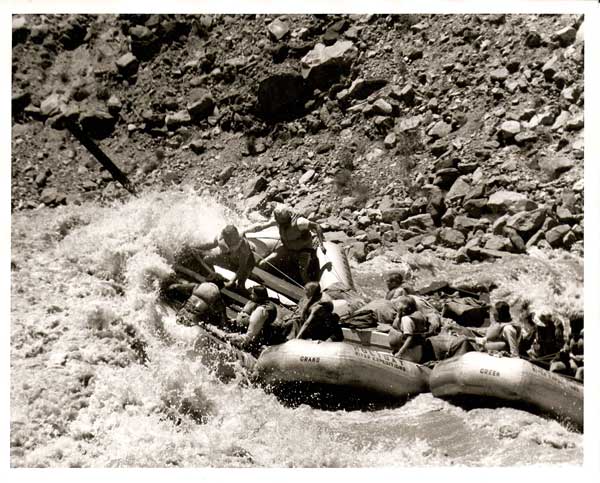 1970s-vintage triple rig going through the Big Drops with Dee Holladay on the front oar.

The triple rig is just what it sounds like: rig three boats together and there you have it. It’s simple and elegant. Oh, and it was designed by the absolutely fierce Georgie White (read all about her here) back in 1954. To the chagrin of her skeptics, who would often question whether a triple sized boat could even fit through certain parts of the canyon, the triple rig proved to be the safest and most effective way to float through some of the toughest rapids on the Colorado.  This design was taken and improved upon by Holiday’s very own founder Dee Holladay, who re-invented the system and pared it down for 18′ rafts through Cataract Canyon.  A few decades of design-tweaking later and here we are!

In high water, rapids can be thirty feet high and a small boat can be flipped like a pancake. But, when three boats are strapped together, river runners can use elegant angling and ‘bracing’ to maneuver through the tumultuous waves. When the first boat in the rig hits a wave it gets pushed through with the momentum of the second and third boats behind it. Then, when the last boat is topping the rapid, it is helped along with a pull from the front of the rig. Essentially, the boats, with the tight control of human conductors, slingshot each other through the toughest parts of the river. 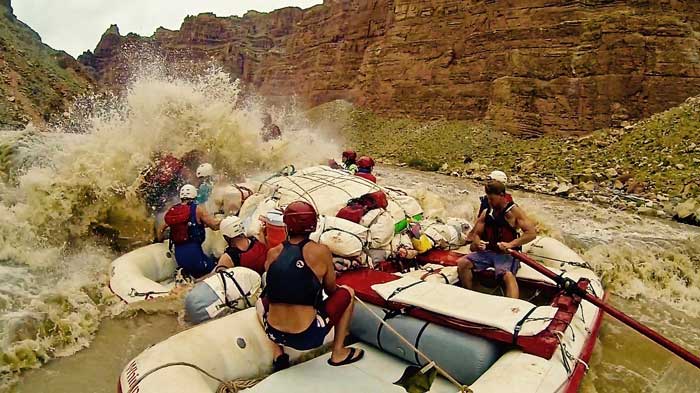 This is especially important in places like Cataract Canyon, which has the largest rapids in all of the Colorado River. Holiday is actually the only company to still run non-motorized rafts through this wild canyon at high water (because, as any Holiday river runner will eloquently explain to you: “motors suuuck!”). In order to keep up the non-motorized Cataract run, the company has had to improve upon the beautiful old triple rig design. Now, we strap all of the waterproof bags between the tubes of the rafts to reinforce the structure and keep the boats from any ‘buckling’ (imagine a raft taco).

“Large motorboats keep you above the experience instead of in the heart of the action.  Smaller oar rafts get you closer to the experience but just don’t have enough length to span the face of Cataract’s enormous waves; consequently, they go over, frequently placing you in harm’s way.  Holiday’s triple rig places you right in the adventure sweet spot riding next to this incredible force of nature, close enough to get wet and truly experience world class whitewater.”

In other words: “Yet what force on earth is weaker than the feeble strength of one/ For the Union makes us strong/ Solidarity forever, solidarity forever.” I think that’s what John Wood means.

But seriously, come and check out the power of unity in a triple rig on a May or June Cataract Trip this season as we prepare for roughly 130-140% of average snowpack delivering us some truly rowdy white water!

Easton Smith is a Local Wasatch Front resident and writer.   He spends his time community organizing, rock-climbing and playin’ some mean banjo.  For more writing from Easton, check out his personal blog or stay tuned for future loggings in River Currents.