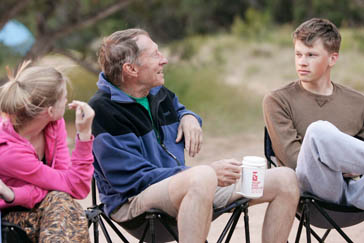 Call it a clan, call it a network, call it a tribe, call it a family.  Whatever you call it, whoever you are, you need one.  ~ Novelist Jane Howard

Blood is thicker than water, so goes the old adage, and days on the river with family serves to strengthen the ties that bind even more. This has proved especially true for multi-generational river trips, where interactions and memories from the youngest up to the oldest members are woven into the fabric of the family for many years to come—a legacy in memories. 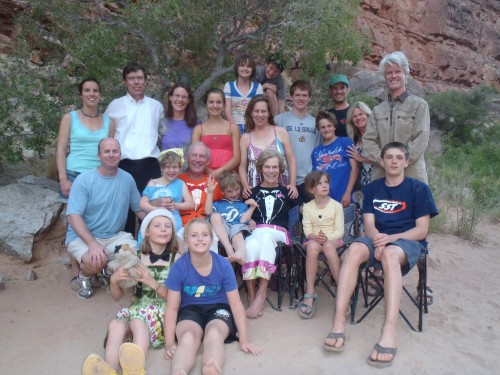 “In four days, we spent more time together than we have in years together in the summers,” says Tricia Paisley, who celebrated her mother’s 70th birthday this past summer on the San Juan River with her family. “The setting equalized the playing field, everyone wasn’t going separate directions. We were all involved in the same activity and experiencing the novelty of this trip together.” She points out that often the teens separate out from the younger children, but on this trip they were all in it together, with a gaggle of cousins ranging in age from 6 on up to 18. 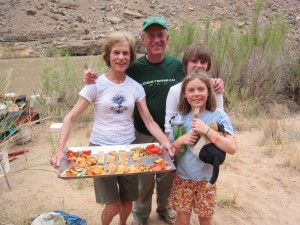 Paisley’s mother, Jane Petzold, who loves hiking and nature but doesn’t consider herself a camper, was apprehensive at first about the surprise 70th birthday celebration trip. Now looking back, she recognizes it was a landmark memory for her family. “It was a destination new to everybody, and allowed me time with each child and with my sons- and daughters-in-law,” says Petzold, who is from Michigan  This was her first time in Utah red-rock country, and the scenery added to the novelty of the trip. “It was so new to us, all that fabulous stone; it almost felt European, like the ancient ruins of Greece or in Rome.”

Snipping the umbilical cord between civilization and nature opens up time for being— time for reflecting and connecting. It allows for playing cards instead of videogames, watching charades instead of television, listening to each other instead of an iPod. Slowing down happens when dads and moms can’t respond immediately to a text or take a call. The older cousins start collaborating with the younger cousins choreographing skits, orchestrating a water fight, or navigating hikes together. 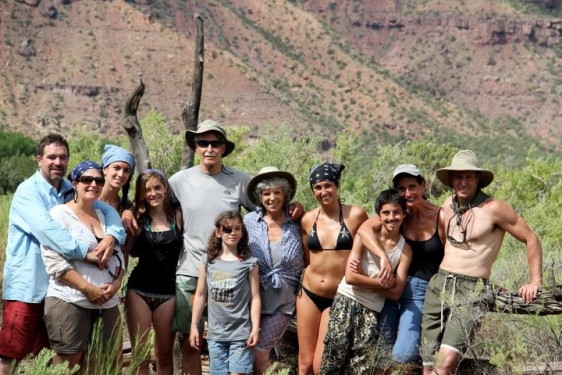 On a Desolation Canyon river trip, Susan Katz recalls how one of her sons, immersed in “high-powered career mode,” was in “stunned” at first with no email, cell phone, or computer. “But after a day, he was completely relaxed.” She adds, “What I loved about it is you got up in the morning and there was no agenda, you were eyeball to eyeball with family, talking and laughing together while eating breakfast.” 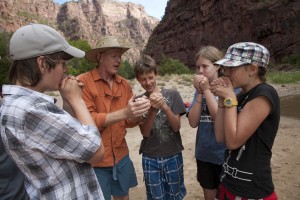 Magical moments on the river

The “grandparent generation” notice the scarcity of eye contact and old-fashion interaction due to the distractions of technology and electronics and how this diminishes quality time together. “We rotated rafts each day so we all had river time with each other. In the evening, around the fire, we played games and talked.” The trip was a celebration for the Katz’s 50th wedding anniversary, which include grandchildren ranging in age from 9 to 17. She admits there was apprehension among some members, teen girls who worried about make-up and hair, teens that thought they would be bored without their electronics, no cell phones. “But we all adapted. The combination of enjoying one another and being close to nature, made it so we couldn’t help but feel good.”

Katz’s granddaughter, 14-year-old Grayson Highfield, remembers wondering whether she would like a trip that involved rafting; in hindsight, it was one of her all-time favorite family trips. “It allowed for a peaceful time with my family without all the distractions.” She points out that if they had done a trip that involved a resort, family members would have split up and done their own things. “On the river, we were all pushed together. The trip ended up being a cool experience and a fun way to get to know my cousins better.” 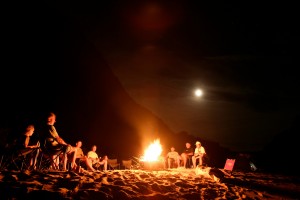 Camping on the Colorado

Paisley, who enjoyed watching the amazement in the eyes of her family who had not experienced red-rock country, recalls a poignant moment that has stayed with her.  While sitting by the river in a quiet, still moment, a jet suddenly came shooting over the narrow canyon, its sonic boom shattering the silence. Then everything settled back into tranquility again. “It was a surreal moment confirming how far away we were from civilization and enhanced my sense of how small we were in the grandness of nature. Everything had slowed down so much in four days that to see something go so fast was sort of a shock.”

When life speeds up again, and families move on to new stages, some celebratory some sad, the time spent on the river—known as River Time—with one another makes regrets few and memories many.

Speak for yourself, share nourishing, funny, or eye-opening moments you’ve had on the river with your family…