Steelhead: Rainbow Trout and the River 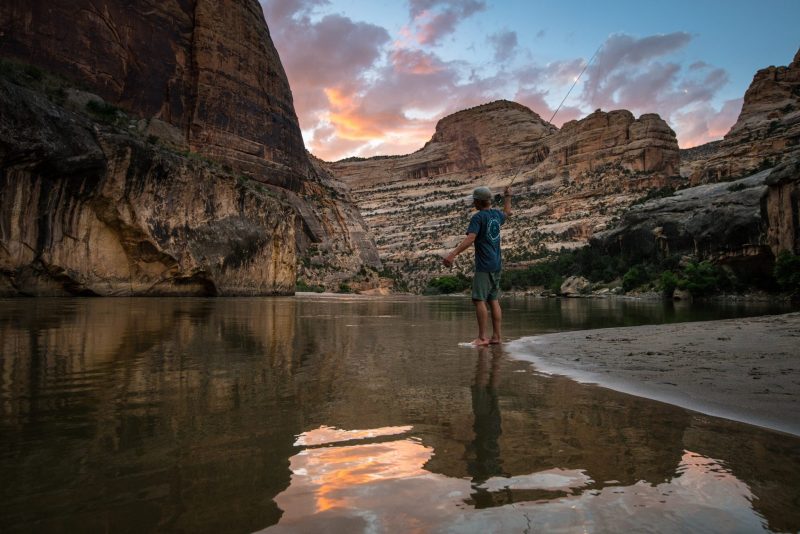 Half-a-dozen years ago one of my best friends from high school moved out to a tiny town in northeastern Utah, where he grew a grizzly beard and never bothered to get a phone that could pick up service in his new, rural neck of the woods. Perhaps he’s running from some nasty personal demons that he never shared with me, I thought. Or, maybe he is running from the law! I tried to call him every few months, and would inevitably get his voicemail– the same one he had in high school. Then, one day, he picked up. He sounded chipper, relaxed. No, he wasn’t hiding or running away from anything. He has just been fishing, he told me.

My friend came over to my house around Christmas and caught me up on his life in Dutch John. He had been living in a small trailer with simple amenities and a simple but good buddy. He had been guiding tourists along the Green, teaching them to fly fish and earning good tips. Occasionally, he told me, the tourists would bring whiskey or a cigar and they would have a great time. Sometimes not. But he didn’t care much; he just loved to fly fish. Specifically, he loved to save up his days off so that he could go on a short road trip to Idaho, where there’s a river that still runs undamed all the way to the Pacific. There, my friend could fish for steelhead trout. 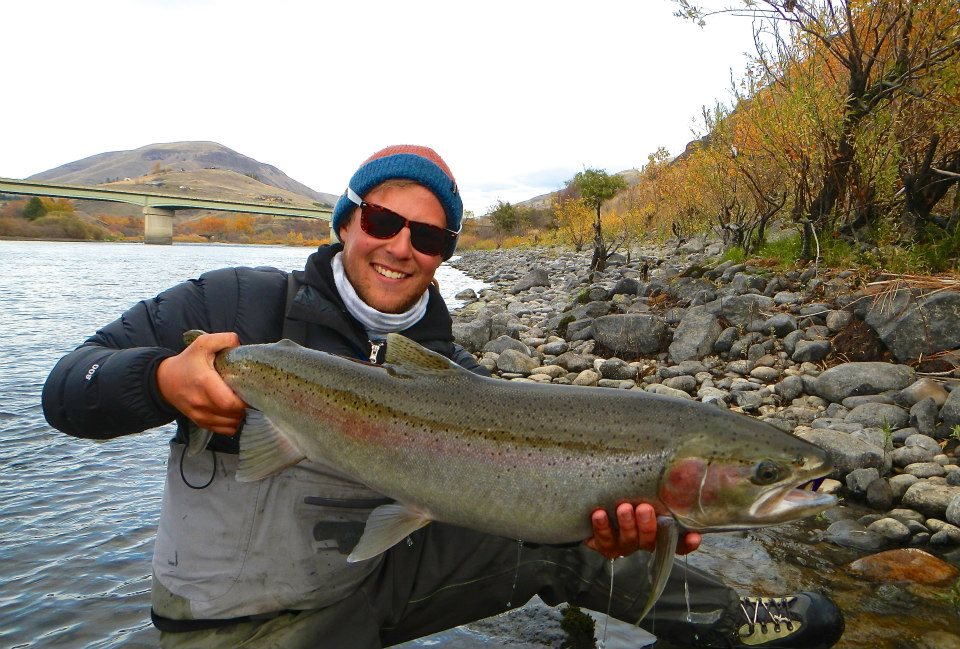 I had never seen my friend so passionate about anything before. Steelhead, which he catches only to marvel at and then release, are the most courageous and beautiful creatures in the world, he told me. Steelhead are, taxonomically, Rainbow trout (Oncorynchus mykiss). But these ones are anadromous, meaning that they live in both freshwater and seawater. They are born hundreds of miles upstream from the ocean. Once they have spent a few seasons growing strong, the fish make an arduous journey downstream. In the case of steelhead born in central Idaho, this can be a thousand-mile route through many different streams and rivers that have varying levels of human activity and infrastructure. If they finally make it to the ocean, and many don’t, their adventure has just begun.

Steelhead trout will swim another thousand miles or more to the icy waters off the coast of Alaska to grow fat within the deep ocean. Imagine a small fry from central Idaho swimming in the big, sharky waters of the Pacific! But after a few years of testing their strength in the Big Pond, steelheads get homesick. A powerful instinct emerges from the iron-bearing structures in the fish’s cells that react to the electromagnetic pull in the North, orienting them back to the coastline near their river of origin. Once there, the fish use their incredible olfactory mechanism (in other words, their smelly sense) to locate the unique musk of their home river water. Then, they begin the long ascent back to where they were born.

Few of the steelhead trout will make it back upstream to breed. These are the ones that my friend spends his vacation days looking for. As he told me all of this, he was animated like a fanatic, a prophet. I had never once wanted to fly fish in my life, but suddenly I was convinced that there is nothing more magical, more spiritual than to look for this long-journeying fish on it’s way back home. My friend has only caught two of them in his whole life, he told me at the end of his screed, as he seemed to grow tired. “There are less and less of them every year.”

Steelhead can’t make it back upstream if there’s a concrete wall in the way. In the Colombia River Basin at the border of Washington State and Canada, the annual run of adult steelhead and salmon (which are also anadromous) is estimated to have averaged between 10 and 16 million fish before non-native settlers came to the Pacific coast in the 19th century. Now, after decades of decline and over 130 dams, there are only about 1.5 million steelheads and salmon making that journey. That is a dramatic decrease and a common story all along the coast. In Southern California steelhead populations are struggling to come back, even in watersheds that received significant restoration efforts.

Some dams are installed with ‘ladders’ for the fish to climb. But these ladders do not always function, and even in the best circumstances only offer a slight advantage in an otherwise perilous situation. And dams aren’t the only human-driven issue for steelhead. Invasive species, irrigation, and other infrastructure projects can upset the delicate balance of the fish’s life cycle. What the fish really need are wild rivers, and as this list of officially ‘Wild and Scenic’ rivers shows, they are few and far in-between.

After more than an hour of telling me about his religious pursuit of steelhead and how they are endangered, my bearded friend looked like a tired old sage. That was when he started to talk more quietly, and more somberly. “We can’t keep doing this. These fish have been traveling up these rivers for thousands of years. Their life cycle is already tough enough, and now we make it impossible.” When he finally left my house that night, he invited me to come up and visit him in Dutch John, which I finally did just this last summer. 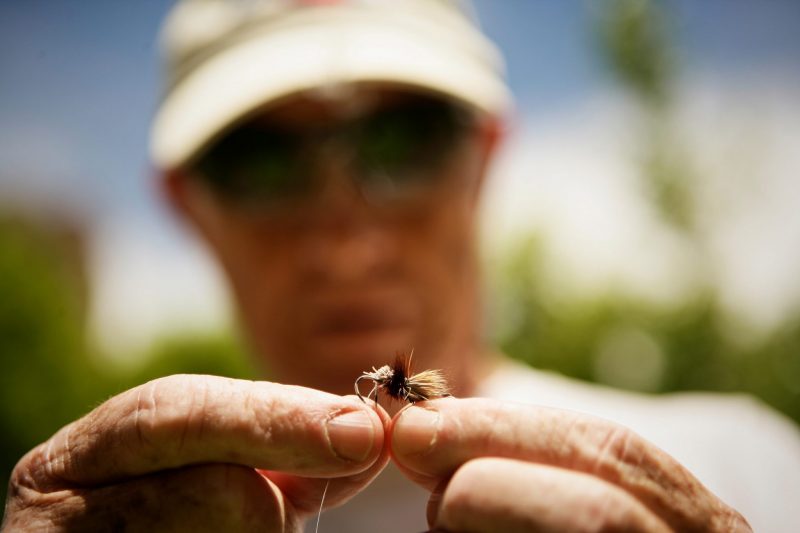 When I saw my friend in his element, making intricate and artistic wire flies late into the night, carrying a beer while rowing our small boat down the Green, I saw why he left the city. He was running towards something, not away from it. We set off on the Green right at the base of the Flaming Gorge Dam, which sits like a military installation with all of its barbed wire and cameras. The contrast between the river and the dam is stark, like having a thirty-story office building in the middle of a jungle. How can anything live in the stretches of river below such a large obstruction? I wondered. But live they do. My friend was catching fish after moving down the river just a few yards.

He was catching rainbow trout, but not steelheads, and not even native trout. These ones have been introduced to the Green River and, ironically, they thrive in the clear, cold, pebble-bottomed river water right below the Flaming Gorge Dam. It’s a great place to take tourists fishing. It’s not such a great place if you are a native fish species. The trout compete ferociously for habitat and food, and on that stretch of the Green, they are successful, at least if our catch is any indicator.

Of course, this is what happens: the human infrastructure is either bad for the fish, or great for them but in all of the wrong ways. I can understand my friend’s obsession with the steelhead, the fish that still carries out its strenuous and lengthy ritual migration despite all of the changes in the river and the ocean. It’s the fish that we have not totally assimilated or wiped out. As I watched my friend laughing and getting sunburned at the ores, lamenting how the river has changed and will continue to change, talking about how he prefers this humble town to the big city, I wondered if he felt like the steelhead does. I sure hope that despite all of the hurdles, those fish are as happy to live with the river as he is.