So where did you sleep last night? 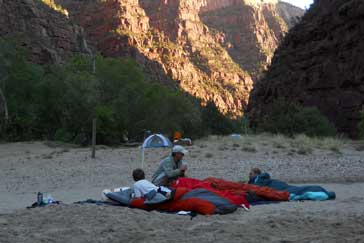 Strangely, it’s a question I often hear on our Main and Lower Salmon River trips… Where did you sleep last night? You see, while our guests enjoy sleeping in the comfort of a tent, our guides typically push the shuteye envelope. I wouldn’t call it “extreme sleeping,” but it’s definitely “riskier sleeping.”

Perhaps our favorite place to sleep is on the beach, under the stars. In one word: tentless. With our sleeping pads laid on plush Salmon River sand, it’s bedtime on nature’s Posturepedic mattress. And usually, it’s an eventless occasion – just another night under the brilliance of a million twinkling stars. But other times, it’s quite memorable. Once, in Colorado, a mouse bit my finger while I slept. A few years later, in the dawn’s cool light, I watched a friend’s dog lift his leg on my buddy who was dead asleep on the beach. I didn’t have the heart to tell him what happened until two days later when he complained of a strange smell from his sleeping bag. 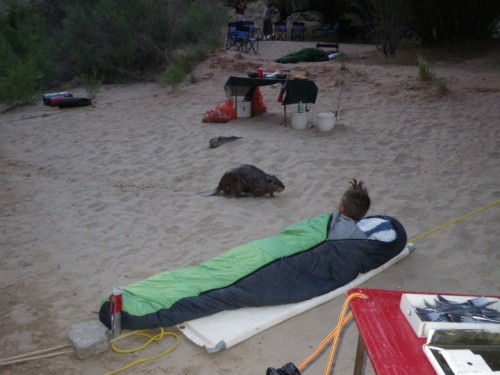 One way to avoid the menace of landlubbing animals is by sleeping on our rafts as they float, tied up, in the river. That’s my favorite place to sleep. Our rafts are rigged with large frames that have one panel that’s barely long and wide enough for a full-sized adult to lie down.

But sleeping on the rafts has its own challenges. We park our boats in eddies, and not all eddies are created equal. Some are calm and serene, like a glassy lake, while others are turbulent and tumultuous, like a seashore. A few weeks ago, on a Main Salmon River trip, we were parked in a turbulent eddy. The boats shifted and rocked, creating splashing and rattling sounds. Then, right before I fell asleep, the rafts made a thumping noise, which sounded like a fellow guide, Russ, running onto my boat. Now I’d trust Russ with my life but I don’t trust him charging onto my raft in the middle of the night. I woke in terror, thinking that I was about to be the recipient of a bad prank, only to find nobody there.

Regardless of where we sleep, either onshore or on our boats, we rarely get bitten by mosquitos, gnats or spiders. More often, our gamble of sleeping under the stars is paid off with something far worse: rain.

On those occasions, we put up our tents – unless we didn’t bring our tents, in which case we sleep in the rain.

Early the next morning as our coffee brews. It’s not uncommon for guests to look at the soaking wet guides and ask: “So where did you sleep last night?” 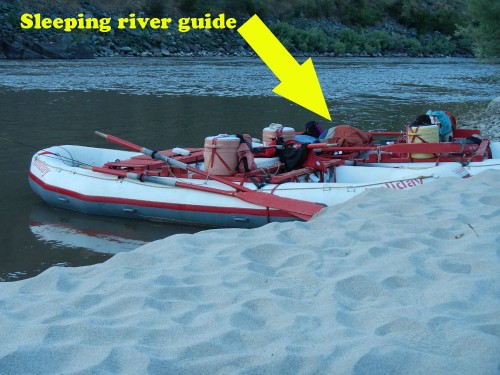