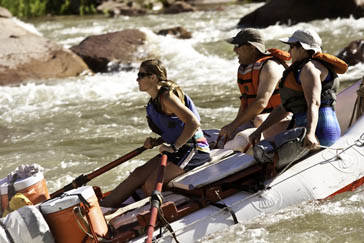 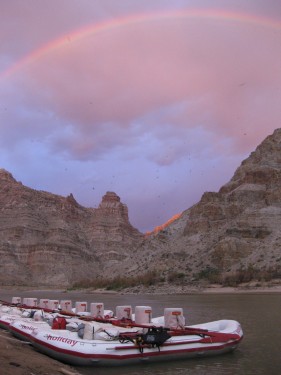 River Time, River Weather, River Skies. It’s been said that rivers are the earth’s wild renegades.  They’re one of the best places to experience nature at its most raw and most primal.  This particularly goes for the elements.  Some of the deepest tranquility, as well as the most ferocious storms I’ve ever experienced, have both revealed themselves in the river canyons of the southwest.

Monsoon season is quite a spectacle to behold.  The first time I experienced a monsoon was in the Grand Canyon in 2005.  It poured so hard that we couldn’t even see downstream more than a couple of boat lengths. We had to pull over and hide under a rocky overhang until the storm subsided.  To this day I can’t remember ever seeing a wall of water like that.

The one and only time I’ve ever seen snow on the river was in the summer of 2009. Though it wasn’t the only time I saw snow in the desert summer. While driving to my first ever day of warehouse work at Holiday River Expeditions in 2008, I passed through a full-fledged blizzard while crossing Soldier Summit south of Salt Lake City, UT.

Tavaputs Plateau is home to our beloved Desolation Canyon, and given its unique geography it often attracts some of the most spectacular lightning you’ll ever see.  Some of my happiest Green River (town) memories include scrambling onto a nearby bunkhouse rooftop to watch what the Native Americans attributed to Thunderbirds battling each other in the sky.

It’s not all violent natural phenomena in the deep desert. As much as the storms I’ve seen and experienced have taken my breath away, the sunsets and tranquility are what will most stick with me. 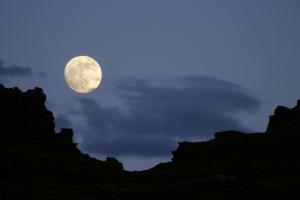 Starry nights in southern Utah are unparalleled.  Devoid of light pollution, the river canyons provide absolutely stunning vistas of the Milky Way, spiraling off into oblivion.  Even the amateur stargazer can bag double-digit shooting stars on any given night with the right conditions and enough time. While the Perseids meteor shower in August gives watchers a veritable bombardment of visual stimulation into the late hours of the night.

Have no doubt that whatever your river trip holds in store, it will be an experience of nature beyond what you’ll find anywhere else.  As always; remember to Go With The Flow.  We’re looking forward to seeing you out there!