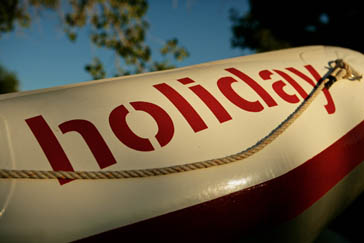 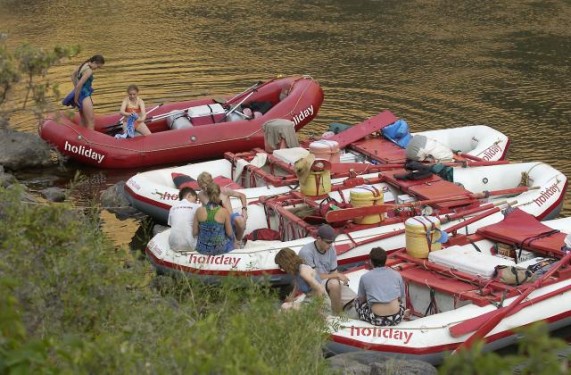 by Julie K. Trevelyan
What boat did you or will you ride in, and why on earth does it have that particular name? Founder Dee Holladay wanted people to ask exactly that, so he named the boats after interesting local people, places, and things. River rafting in the West has a long, fascinating history peppered with folks who lived larger than life and left their mark on the psyches of modern day rafters. Holiday offers self-bailing paddle boat trips for those with a sense of adventure and a willingness to work. Since guests are also responsible for paddling these boats, we named them after rafting adventurers of old, each of whom paddled their way into history. 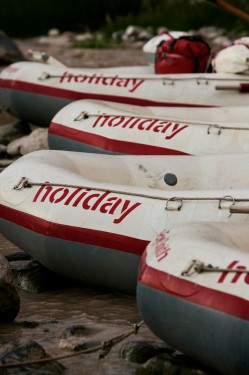 Ann – Ann Bassett lived a life full of color, wild adventure, and high spirits back in a time when most “ladies” were expected to be prim and proper. Raised the daughter of an intrepid female rancher in Brown’s Hole, by the Green River near the intersection of Utah, Wyoming, and Colorado, fiery Ann could ride, shoot, and hunt with the best of them. Nicknamed “Queen of the Cattle Rustlers” for her participation in the late 19th century/early 20th century criminal activity common to the area, Queen Ann was friends with Butch Cassidy and his Wild Bunch gang.
Josie – Josie Bassett lived life somewhat less temperamentally yet just as extraordinarily as her sister, Ann. Enamored of the Colorado Plateau landscape, she spent her years working hard on the family ranch, unafraid to dig post holes as she worked alongside the male ranch hands. Married five times and boasting a string of lovers throughout her life, if legend is correct Josie’s most famous romantic entanglement was with Butch Cassidy. The family home hosted Butch and his gang at their dinner table many times, and Josie considered the outlaws to be regular people, albeit ones more likely to have the law breathing down their necks than most. 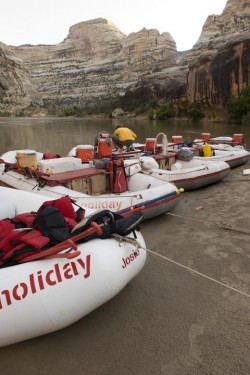 Bessie – In 1928, Bessie Hyde and her new husband, Glen, set off on a rafting trip on the Green and Colorado Rivers. They were never seen again, and the questions and theories behind their disappearance intrigue whitewater buffs to this day. Were they drowned? Murdered? Decided to create new lives and simply vanished to a place such as Mexico? Did Glen butcher his wife in a fit of rage and then hie off himself to places unknown, running and hiding the rest of his life? Did Bessie slit Glen’s throat before taking off herself? Nobody seems to know. Last seen by Grand Canyon photographer Emery Kolb in November 1928, the Hydes left behind haunting photos, interesting pieces of their lives to decipher, and plenty of stories for anyone who rafts the Colorado River today.
Glen – Glen Hyde was a tall, thin man who made part of an attractive and adventuresome couple with his wife, Bessie. Somewhat experienced with rafting before meeting Bessie, Glen had an instant affinity for the rivers. He proposed the honeymoon Colorado rafting trip to Bessie with the ambitious idea they would achieve two immense accomplishments: one, set a new record for rafting speed through the canyon, and two, to make Bessie the first woman to successfully run the Colorado. It is possible they became more famous for their disappearance than anything of major note they might actually have realized had they lived. Regardless, the romance and mystery surrounding them remain to this day. 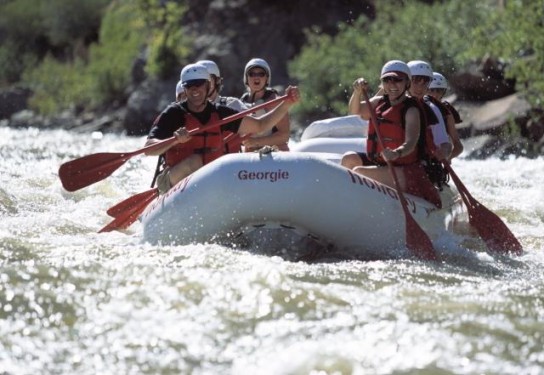 Georgie – It’s impossible to discuss the rafting history of the Colorado without mentioning Georgie White Clark. A whitewater rafting aficionado, Georgie pioneered commercial rafting and became well-known for the party atmosphere, minimalist accommodations, and endlessly seductive tales of fabulous life on the river. Georgie was seemingly fearless and very determined to do things her own way. In 1945, she and a companion swam the Grand Canyon, mostly to prove they could. Georgie later called the awesome experience “like riding a roller coaster made of water.” At the beginnings of modern commercial rafting, Georgie denounced the prevailing attitude that the “fairer sex” should usually walk around rapids rather than rafting them—she simply did it herself and took her guests right through them, too, regardless of gender. Georgie ran her last river at 80 years of age, a legend till the end.