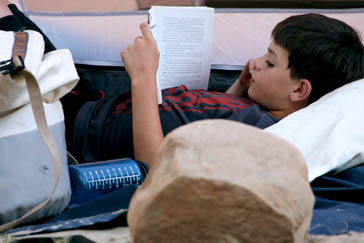 Reading is my favorite thing. I am an unapologetic, unabashed bookworm. Reading is the thing I would rather be doing at any given moment, with the possible exception of rowing a raft through the river canyons of the Colorado Plateau. Although there are countless things upon which to rest one’s eyes on a river trip—the movement of the water, patterns of light on the canyon walls, the awesome expanse of the starry night sky—there is always time for a book.

Holiday brings a small collection of books on most of our trips. The river library was a big part of Dee Holladay’s vision for his company, and the tradition is alive and well today. Stuffed with maps and books on geology, history, poetry, and archaeology, each library provides reading material to pass the time and answers to questions you’ve been pondering throughout the day. But if you’re like me, you won’t leave home without at least one book stuffed into your dry bag.

These are, in my opinion, some of the best books about the rivers of the Colorado Plateau: history, memoir, fiction, and the kind of history that reads like fiction. These titles will open your eyes and bring the river corridor to life. Support your local independent book store* or check out your local library, and dive nose-first into your river trip.

John Wesley Powell is one of the most important figures in western river history: the first Euro-American to explore the entire length of the Green and Colorado rivers in 1869. With a crew of ex-Union soldiers and hardy mountain men, he embarked on a journey of wonder, exploration, and incredible hardship.

For a book that combines history with the nail-biting true story of the fastest-ever run through the Grand Canyon, check out “The Emerald Mile” by Kevin Fedarko. It describes the early history of the Colorado River and puts the modern development of the river into context. And it will keep you on the edge of your seat as it tells the tale of three Grand Canyon guides who launched a wooden boat under the cover of darkness to run a historic flood—and lived to tell about it.

No list of required-river-reading would be complete without Edward Abbey. “Cactus Ed” was one of the most eloquent of the multitude of voices raised in outrage at the flooding of Glen Canyon beneath Lake Powell. (Incidentally, Powell himself would have been not at all grateful for the “honor” of his name being given to the reservoir. “Beyond the Hundredth Meridian” by Wallace Stegner describes Powell’s career post-river and his uniquely prescient vision of a sustainable blueprint for western development.) Edward Abbey worked as a ranger in what was then Arches National Monument, and penned “Desert Solitaire,” a stirring and beautiful memoir and ode to Utah’s canyon country.

Want something a little lighter? Ed Abbey’s “The Monkey Wrench Gang” is a fast, fun piece of fiction (it’s like reading the script of a Hollywood action movie) about a small group of concerned citizens who are determined to protect the red rock desert they love and are praying for “one little pre-cision earthquake” to take out Glen Canyon Dam.

Katie Lee was another desert denizen who loved the canyons of the Colorado, and none of them more than Glen Canyon. “All My Rivers Are Gone” brings to life a place that most of us will never know. And it revives the incomparable, indomitable spirit of Katie Lee herself.

Ellen Meloy was a gifted writer who used humor and wit to celebrate her love for western rivers. “Raven’s Exile” describes a number of seasons spent living along the Green River in Desolation Canyon with her river-ranger husband. “The Anthropology of Turquoise” is a celebration and exploration of the larger western landscape, and was nominated for a Pulitzer Prize.

Craig Childs is tireless desert wanderer. His books are exhaustively, intimately researched through months and years of walking the landscapes about which he writes. “House of Rain” follows the movement of the ancient people of the Colorado Plateau and attempts to solve the mystery of their disappearance. “The Secret Knowledge of Water” is a spellbinding, almost mystical exploration of the desert’s most precious resource.

Water in the west is not only a subject for naturalists. The politics of the Colorado and Green rivers have inspired dozens of books that work to unravel the complex system by which most of the southwestern United States stays hydrated. These are a few particularly good ones:

“Encounters with the Archdruid,” by John McPhee, is less about rivers and more about a man who loved rivers—and fought for them. David Brower was the first executive director of the Sierra Club. He (along with many others) was a part of the fight to stop the construction of the Echo Park Dam, which would have flooded the river canyons of Dinosaur National Monument. With brilliant, quiet observation, McPhee writes about David Brower’s passionate and very human efforts to save three different natural wonders, including the Grand Canyon.

If you’re looking for a book that will blow your mind and heart wide open, “Braiding Sweetgrass” is the one. Robin Wall Kimmerer is a botanist, a professor of environmental biology, and an enrolled member of the Citizen Potawatomi Nation. Blending Indigenous understanding with the scientific method and stories from her own life, she weaves together a collection of essays that are as thought-provoking as they are beautiful. This one will last you through a lifetime of river trips.

You probably won’t want to take these books on your river trip, but they are excellent editions to any coffee table, and incredibly informative for all of your pre- and post-trip wonderings:

And finally, just for fun, a book that combines rivers and fly fishing with a young man’s search for the meaning of life: “The River Why” by David James Duncan. Hilarious, poignant, and inspiring, this one will tangle you up in its fishing line and won’t let you go. Even after you’ve finished it, it will glitter and spark in the corners of your mind like sunlight on a river.

*We’ve linked each of these titles to a different independent bookseller, including several that are Black- and Indigenous-owned. If you choose to buy any of these titles, please consider supporting the businesses represented here.