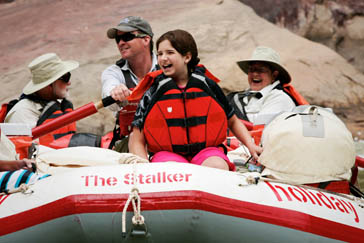 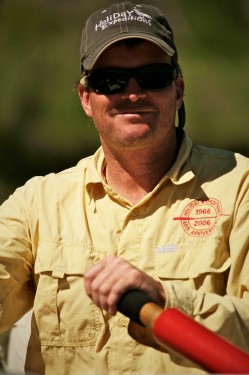 Profiles Vernal Manager, Kerry Jones “KJ”. On any given weekday in Holiday’s warehouse in Vernal, Utah, just after dawn, you can find Kerry Jones stirring bacon in a cast iron skillet. Chopped onions for hash browns sit ready on the counter. The Vernal manager is probably still in his pajamas, and he’s definitely the only one awake. He’ll cook up a breakfast feast, then retire quietly back to bed, leaving it for the guides to find when they get up an hour or so later. “It’s magical,” says guide Jesse Kasten. “He’s like the Bacon Fairy. You never see him doing it, but somehow, there’s always fresh cooked bacon!”

Food, family, fly fishing, skiing, and of course, running rivers: these are what make Kerry Jones tick. The Salt Lake City native has been working for Holiday since 1982, when his father decided that Kerry needed to be kept busy. “You know, busier than just hanging out with his friends,” says Tammy Jones, Kerry’s wife and daughter of company founder Dee Holladay. The first summer, Kerry worked in the warehouse. “He learned everything about how the company runs from the ground level,” Tammy says. The next year, Kerry came back as a guide, and hasn’t missed a summer since. “After all these years, he’s still on the river,” says guide Kevin White. “That’s some endurance. And he’s still the same fun-loving, hard-working guy.” 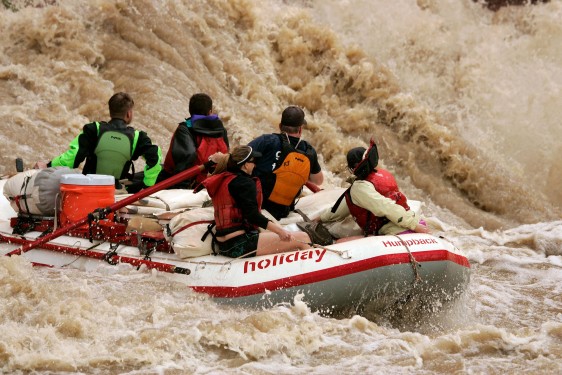 The Yampa River is what truly stirs Kerry’s soul. The last undammed river on the Colorado Plateau, the Yampa runs only in the spring, and it runs big. Although managerial duties keep him busy on land for much of the summer, Kerry still guides about ten trips a year, and many of those are Yampa trips. “Kerry’s kind of the lead boatman,” Kevin says. “He’s directly in touch with the river aspect of the company.” In his off time, Kerry fly fishes on the upper Green River from his dory, a lightweight, shallow-draft boat that he restored by hand. The boat’s name? The Yampa. 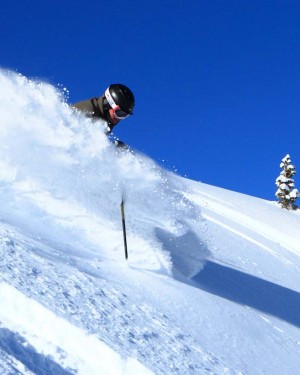 During the winters, Kerry manages Alta Sports, a ski shop at the Alta ski area near Salt Lake City, and in the shoulder seasons, he and Tammy travel to California and New York to visit their son in college and daughter in ballet school. Tammy remembers, “When the kids were growing up, that was always Kerry’s favorite, to take them on the river.” Pride shines between his words when he tells stories, not only of his own family, but of the larger Holiday family.

Kerry understands Dee Holladay’s legacy of constantly searching for different and better ways to do things. Mention an issue casually in the morning and Kerry will spend the rest of the day thinking it over, appearing when you least expect him, offering new ideas and solutions: “How about this? Or, y’know, what if we did it this way?” He especially gets excited about food, and is constantly tinkering with Holiday’s recipes, searching for new, cost-effective ways to excite and inspire our guests’ palates. On one trip, he adapted our standard sopaipilla recipe to cater to a guest’s request for more chocolate, zesting orange peel and dark chocolate over the fried dough. Needless to say, it was a hit. 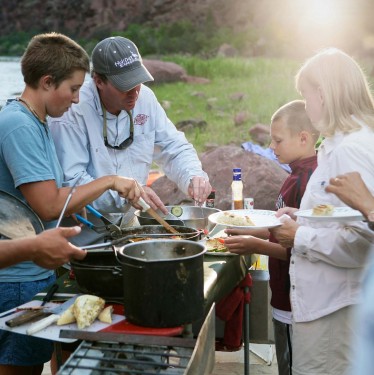 “He’s not a traditionalist, exactly,” Tammy says. “But he has incredible respect for Holiday’s traditions.” During the annual on-river training for new guides, Kerry tells stories about the company’s history, and emphasizes the proper way to balance the weight in a raft, where to tie in extraneous gear and which straps to tie it in with. “Dee Holladay designed these boats to be extremely efficient, easy, and safe to row. There is a right way to do it,” he explains. He has a thorough, calm, and clear way of giving directions, even while he’s drifting sideways into a monster wave with a helpless rookie at the oars; he may be swearing, but he’s still speaking in complete sentences. “Kerry relates to people. It doesn’t matter their age,” Kevin says.

It’s evening in Vernal, and Kerry’s back at the stove. “I just got some fresh back steak, venison, from our neighbor the farmer,” he says. “This is really good stuff. I’m just going to fry it up a little bit, you guys should all try some.” Kerry, the generous gourmet, is at it again, trying new things, keeping us happy, nourishing his Holiday family. 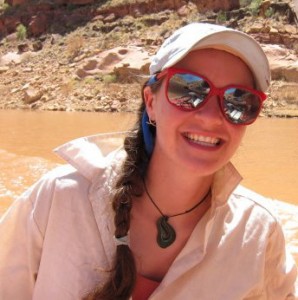 I am a 20-something female who is addicted to travel and has a passion for writing and photography. I’m a reader, an idealist, and an adventuress. I believe in serendipity and dream of working for National Geographic Magazine. Raised in New Hampshire and currently based in Salt Lake City, Utah, I’m a mountain child who’s learning to love the desert.