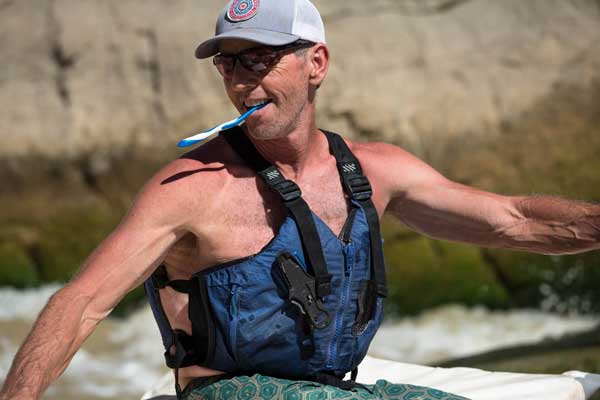 “Wellll, not really. But leave a message and I’ll get back to you as soon as I can.” 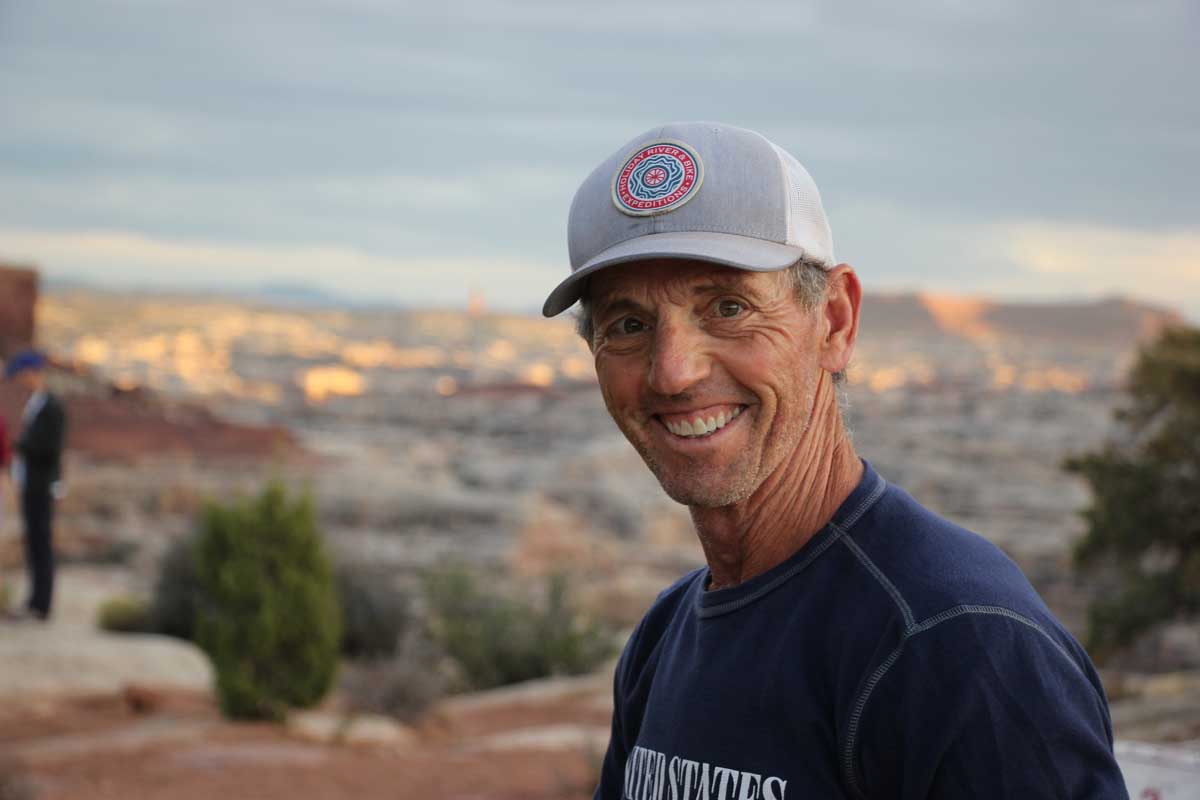 Foiled again! I can hear him grinning through the recording as he imagines flustering another caller. Guiding for Holiday at age 19, leading trips at age 20, Tim Gaylord, Director of Operations, has been synonymous with Holiday River Expeditions for 40 years. In that time he’s honed his river skills, management ability, and sarcastic sense of humor to a T.

Tim is awake at 4:45 AM, hovering by the coffee maker when I step into the kitchen. Of course he is. It doesn’t matter what time you wake up; Tim is always awake before you, on the roof fixing the swamp cooler, rolling into the kitchen in a rush of endorphins after a quick fifteen-mile bike ride, welding a trailer in the shop. Tim has two speeds: fast, and faster. “Jeez, about time you got up,” he winks at my groggy glare. “Ahhh, yep, well, just want to go over a couple of things before you take off,” and then he’s speed-walking toward the office and the schedule, leaving me to catch up.

Tim runs a tight ship. Every tool has its place, outlined and labeled on the wall with black marker, and every task has a system. “There’s more than one way to skin a cat,” he tells trainees, “and chances are we’ve tried them all.” The man is an organizational mastermind. I imagine him lying awake at night, mentally rearranging the schedule, able to keep track of 25 full time guides, 15 part-timers, two warehouses, grocery lists, guest special requests, chore lists and more. “You know, the reality is I’ve actually mellowed quite a bit,” he says. “I did one trip with a friend, years ago. She pulled me aside half way through the trip. Said, ‘Tim, you’ve got to calm down. You’re stressing out the other guides, the guests are stressed, even the animals on the shore are stressed!’” He laughs. Tim uses a digital voice recorder to keep a running to-do list. Sneaking it away from him to leave joke entries is a favorite pastime of guides. “Change Holiday Red to Holiday Blue.” Or, “Give Jesse a raise.” A blue-tooth earpiece for his phone lets him talk and work simultaneously, as well as confuse people who think he’s talking to them.

There’s a picture in the company store of Tim running the front oar of Holiday’s signature “triple rig”, pulling into Big Drop 2 in Cataract Canyon at high water. His eyes are trained downstream, his arms and legs are braced against the whitewater surging around the raft. It’s one of Holiday’s iconic images of excitement and intensity on the river. We point it out to guests and new guides with pride: “That’s our boss.” 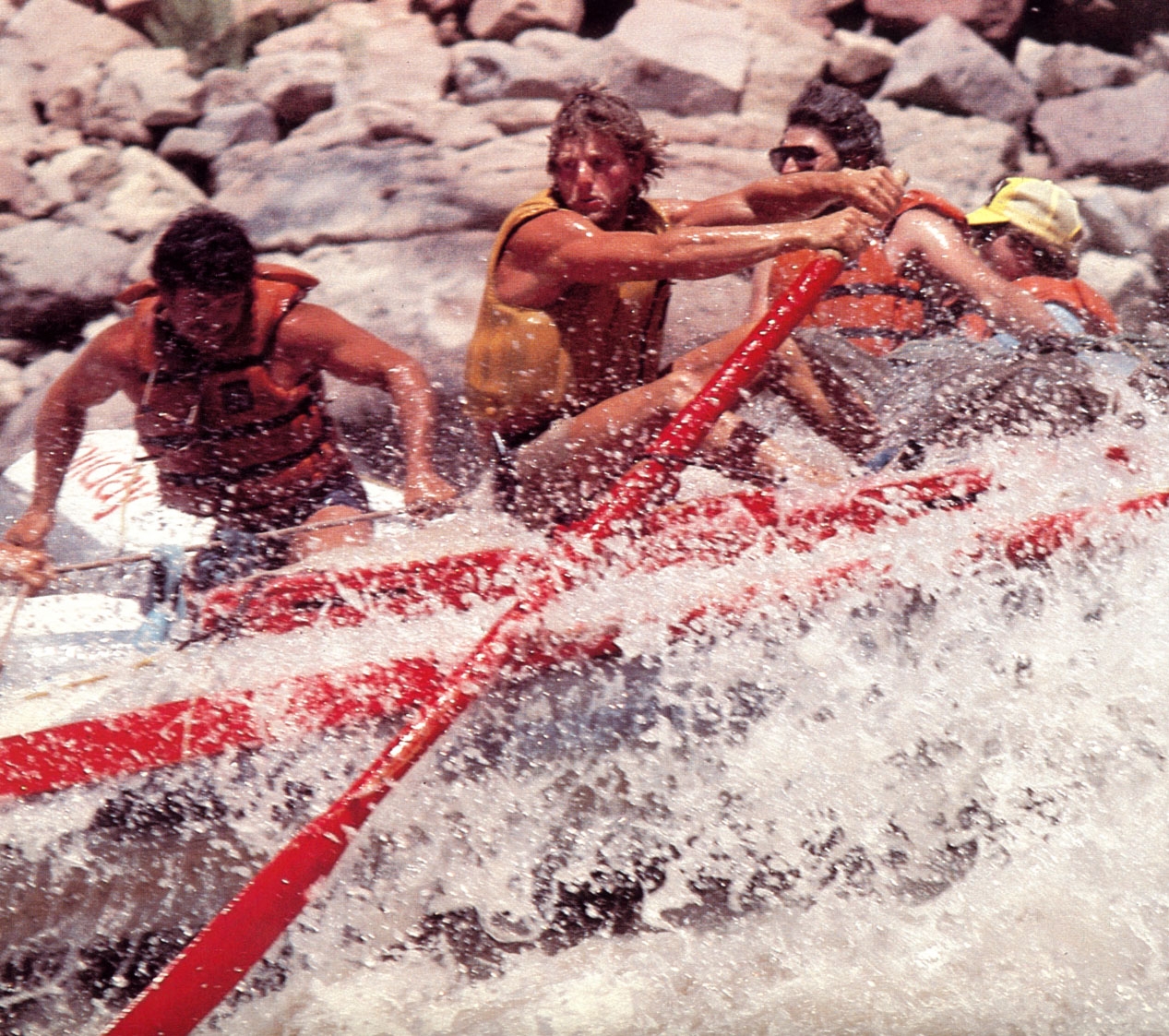 “Guides come back because of Tim.” I’ve heard it said more than once. “He’s the best boss I’ve ever had,” says Lexi Foutz, a first-year guide. “He expects a lot of us, but he also really cares and worries about us.” “He’s our river dad,” Sean D’Amboise adds. Tim’s always willing to discuss the small details: whatever it takes to see that things run smoothly and to make sure we feel supported. Well, almost supported. His famous response when anyone asks him to wish them luck is, “You don’t need luck. Just do your damn job!”

On a rare quiet night at the warehouse, several of us and Tim are sitting at the picnic table in the back yard, watching the sun set fuchsia and tangerine over the Book Cliffs. It’s our nightly show. A wizened, half-dead tamarisk juts into the horizon, blocking the view. “Tim, when are we going to get rid of that thing? It’s totally in the way of our sunsets!” This is an old complaint. “Well, the reality is it wouldn’t take very long.” He sits for a bit longer, finishing his Corona, then disappears into the warehouse. Two minutes later, the unmistakable gnashing whine of a chainsaw starts up from around the corner, and Tim strides into the backyard, tossing work gloves at us before burying the teeth of his saw into the offending tree. Sawdust and sparks fly, an astonished family eating at a picnic table in the park next door stares, and in less than ten minutes, the invasive tree is lying in pieces. As the last branch falls, Tim switches off the saw and we cheer. The family next door joins in the round of applause. Tim grins. “Happy now?” The sunset lasts for an extra half hour that night, as if to respond, emphatically, Yes, Tim, we’re happy now.