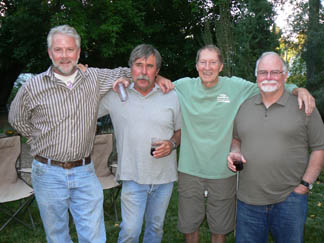 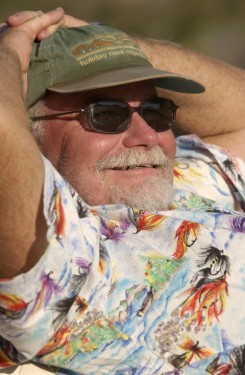 When Dee Holladay first started running rivers for guests in the 1970s, Harold Stewart (known indelibly as Frogg for the last 55 years) was one of his early guides. Assisting Dee along with Kim Crumbo, Dee’s right-hand river man. An avid surfer, who came to Utah for love but ended up skiing, Frogg took to the water quick, learning the ropes of the river from Dee and Kim.

After five years of escorting guests through rapids and deep canyons, including Grand Canyon trips, Frogg was ready to invest more, turning his time on the river from a job to a profession. He and Dee worked out a co-ownership of the company, allowing Frogg to branch out to Idaho’s rivers. Frogg was able to purchase a permit from Bob Smith, part of one of the original outfitter families that had been in business since the 1930s. (Bob was born at the confluence of the Main and the Middle Fork Rivers).

“Back then, not much was happening up here on the river,” recalls Frogg. In 1979, Frogg began taking guests—many of them Holiday repeat guests who had exhausted the Utah rivers—deep into Idaho’s wilderness areas via the Main Salmon, Lower Salmon, and at the time the Snake (Hell’s Canyon) and Lochsa rivers. 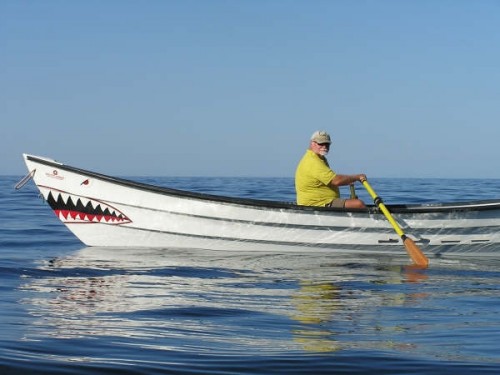 Frogg off the coast of Baja

“A river is a river, the flow of water over rocks and falls is pretty much the same everywhere,” says Frogg, speaking to the shift from Utah to Idaho rivers. The same Holiday tenets and high standards in training remained—emphasis on safety, fun, and a healthy dose of respect for the wilderness. Like Utah guides, Frogg’s guides—who focus just on Idaho rivers—regale guests with their knowledge of the geology, ancient cultures, and natural history of the areas.

Prior to running his first formal trips down the Main Salmon River, Frogg recalls coming up for the first time to take a look at the river that November. “As I was driving down to Corn Creek [the put-in], I ran into so many bighorn rams, about 40, that I had to practically stop the car to get around them. They all just stood there and looked at me as if to ask, ‘What in the world are you doing here?’” 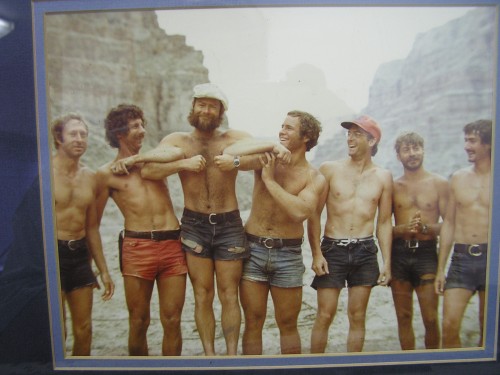 “Frogg” third from the left

Equipped with six boats, and a mix of fresh and veteran guides, all of Frogg’s trips were full that first season. A good omen; now for 35 years, Frogg’s crew has been guiding guests deep into Idaho wilderness via the river. At the time the guest to guide ratio was 5:1, now it is 4:1 ratio. “A lot of Holiday guests wanted new rivers to run, so branching out into Idaho was timely,” adds Frogg.

In those 35 years, Frogg recalls repeat guests from over the years, mentioning them by name. Some returned every year for many years. “I watched the kids in these families grow up and I saw some of them fall in love with the river for the first time,” recalls Frogg.

In those 35 years, certain river-running seasons stand out. In one of the first few years running Idaho’s rivers, 1981, generous snowmelt resulted in a 55,000 cubic feet per second (cfs) of water raging through the Main Salmon. “All the beaches were underwater and so was the road to get to the put-in so we had to enter higher up on the river,” remembers Frogg. By the end of the six day trip it was flowing about 99,000 cfs. 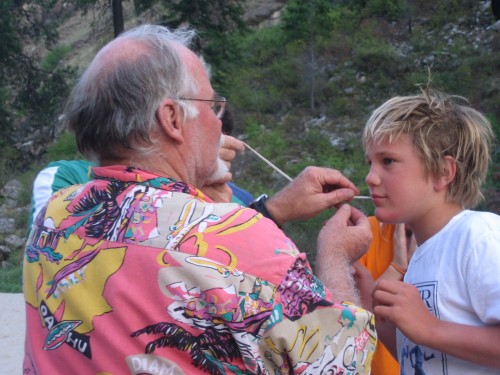 Another memory that leaps out is when the Idaho Outfitter and Guides Association opted to celebrate the 1990 Idaho Bicentennial by having river pioneer Bob Smith build two replicas of the beefy, wooden scows his dad and granddad used to row down the river. Frogg recalls the 20-foot-long oars made out of six-inch diameter lodgepole pine logs, with about six or seven-foot blades on them. “It took two hands on the oar and a lot of body English,” says Frogg. “It gave one a real appreciation for what those early river runners went through.”

Frogg’s own two daughters were raised on the river. One of them guided trips for a while, and both return to take river trips, the water-soaked roots of their childhood. “They gained a strong appreciation for the natural world, that’s for sure,” says Frogg. “As adults now, they really see the unique value of river trips.”

“When you take a river trip, you leave all the distracting stuff behind, and become disconnected from all those strings that reach out and grab you in life,” explains Frogg. “I used to tell parents, it is the kind of trip where kids can’t tune you out. They have to actually engage with you and others. You’re truly there and present with each other. Not a lot of trips do that.” 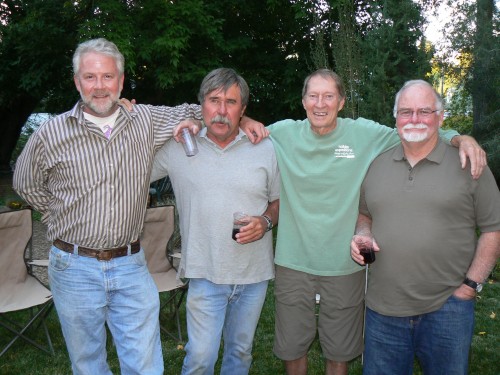