Prior Appropriation and Water in the West 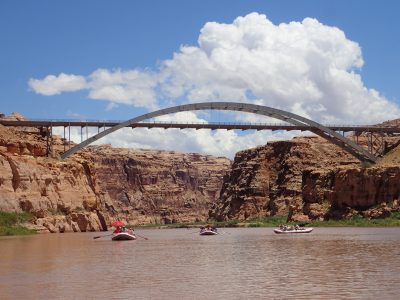 The first in a four-part series on water law and allocation in the Colorado River Basin. by Rica Fulton

Water in the Arid West 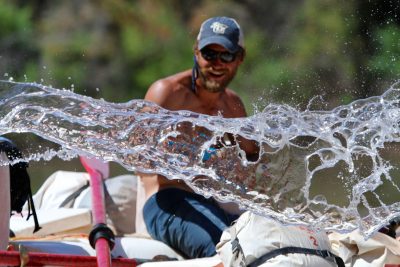 Recall being a kid on the sandy banks of a river — crawling on your hands and knees. Using one hand, and then the other, to dig down into the sand right at the point where the dry grains become mud; where the river laps at the bank. Once your hole is deep enough — to your great satisfaction, water slowly trickles out of the river channel and into the makeshift trench. Most of the time, it doesn’t take long for the water to seep slowly into the unsaturated ground — but sometimes — it stays pooled long enough that it keeps filling up your trench. A burst of exhilarated energy follows the rare, successful diversion, and you scurry like a hermit crab with both your hands cupped now; frantically excavating the ditch deeper and further to see how far you can coax the water to flow.

Humans have been infatuated with modifying river systems for millennia. It’s not just adventurous children who strive to test hydrologic limits; the Hohokam Peoples, who were some of the first to irrigate crops on a large-scale, dug impressive ditch systems in what is now Southern Arizona; Mormon settlers in Utah also relied on supplemental water through canal systems, and developed some of the first modern irrigation techniques in the 1800s; and most recently, the Federal Bureau of Reclamation built colossal dams and reservoirs like Hoover Dam and Lake Mead in the 1960’s and 1970’s, to regulate the temperamental Colorado River.

Water development and distribution in the West has become normalized. Overall, where water comes from on a regional level is not something average people think about in their daily lives. A canal transporting water to farm fields, or a massive reservoir backed up by a dam, may look no different from a small stream, or a natural lake to the untrained eye. Turning on the faucet and expecting water to come out is all most people know, which has created a huge disconnect into how water is perceived in many communities. The reality is, however, that complex laws, legally-binding agreements, and impressive engineering feats have come to dictate where the water goes, who gets to use it, and what it can be used for. 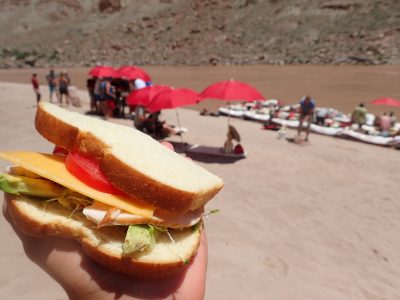 Western water law can be broken into multiple scales and concepts. One of the most fundamental doctrines that allocates water to individuals is “prior appropriation.” The doctrine can be broken into two tenants: Initially, “first in time, first in right,” which simply means the very first person to use a specific amount of water, for a specific “beneficial use” has the right to use their entire amount before anyone else. “Beneficial use” traditionally means municipal, agricultural, or hydropower uses — but has in recent years (since the late 1960s), been broadened to include some environmental needs.

The second tenant is: “If you don’t use it, you lose it.” This means that if a water-right holder fails to use their allotment, they will lose it to a junior user who is assumed to put it to beneficial use. Overall, this system is somewhat predictable, but encourages waste and excludes those without senior water rights.

Prior appropriation was first developed by gold miners in the Sierra Nevada Mountains in California, who needed to use massive amounts of water to find and process gold. In a water scarce environment, the madness of the Gold Rush constituted a law that benefited those who were first using water to make a profit, and ensure economic stability. As more Euro-Americans began mining and settling the West, small-scale irrigation on personal plots of land became the nucleus of the American Dream. The doctrine carried-over to all water uses in most Western States. In such an arid region, small-scale farms are not very profitable, and eventually, industrial agriculture took over as the most efficient and economically feasible way to make money by growing food in the 1960s.

According to western water law guru, Dan Tarlock, prior appropriation has evolved to encompass three main users: agriculture (86%), urban cities (5%), and hydropower, (which is a non-consumptive use). Despite a small reduction in irrigation and an increase in urban use, the stability among users allowed the doctrine to stay feasible and stable in the dam-building era of the 1960s in the United States. Furthermore, since prior appropriation does not require that water be used in the watershed of origin (like forms of common law Riparianism used on the East Coast does), it allows for the growth of cities such as Los Angeles and Denver which lay outside of the Colorado River Basin.

In the seven-state Colorado River Basin, California was using and developing mass amounts of water before the Upper Basin states (Wyoming, Colorado, and Utah) had the chance to in the early 1900s. When it came time to decide who deserved to gain from the mighty Colorado, the federal government became involved. In 1922, the Colorado River Compact was created setting the stage for decades of subsequent statutes, interstate compacts, agreements, and an international treaty. Stay tuned for Part II of this series to learn more about the “Law of the River.”

What about Climate Change? 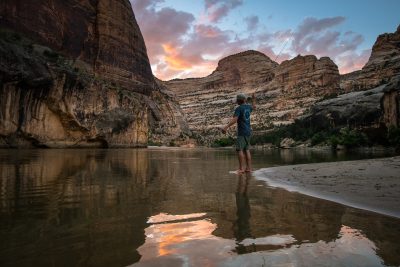 As the atmospheric CO2 levels creep above 415 ppm, it is clear there is no stopping human-caused climate change. Snowpack is lessening in the Colorado River Basin — up to 20% more by mid-century — which means we must adapt to using less water as soon as we can. Fundamentally, the lion’s share of water supporting agriculture is providing food to the masses, and therefore, water shortages impact not only the agricultural economy but also food security. Dan Tarlock suggests that the lack of recognition of the impacts on agriculture from climate change and subsequent food security policies in this country is severely lacking, especially compared to most other developed countries.

In the Arid West, it is easy to agree that water cannot be a free-for-all; so we need a system of rules. However, prior appropriation has a series of problems that will need to be addressed as the world delves into the new normal of climate change. First, the doctrine was developed before an understanding of ecosystems was developed, thus, only piecemeal approaches to keeping water in rivers exist (more to come in Part III of this series).

Second, it is nearly impossible to accurately monitor where water travels through 150-year-old canals, antiquated ditch systems, and old pipes. Installing additional gages and modern head-gates would be an immensely expensive undertaking but may be necessary to track where the water goes. An inherent lack of trust stems from the individualized system, as governments or other entities take water from those who have rights to it.

Such lack of trust can be seen on multiple scales, but most tangibly toward any regulatory action of local watersheds from the federal government. When state and federal governments seek to regulate water, especially during drought years, they rely on measurements and detailed records from water rights holders. However, many farmers don’t keep detailed records and therefore need to trust state diversion records, which may not always be correct.

Finally, there are very few incentives to conserve water, as any saved water would go to a junior user, rather than be used for additional crop acreage, for instance. Using water in fear of losing your right to it, leads to waste and inefficient uses of water.

The static nature of prior appropriation of water as an individual right does not effectively provide the flexibility needed to adapt to water shortages and food security. We must consider human needs as a whole in the face of climate change, rather than the individualism currently driving water allocation in the West. Understanding the processes that drive where the water goes is a fundamental part of taking part in the conversation of the future of water in the West since we all depend on it.

Stay tuned for the next installment of this series, which explains the “Law of the River,” the body of laws governing water allocation in the Colorado River Basin.