Pockets of Life: The Living Legacy of Desert Potholes 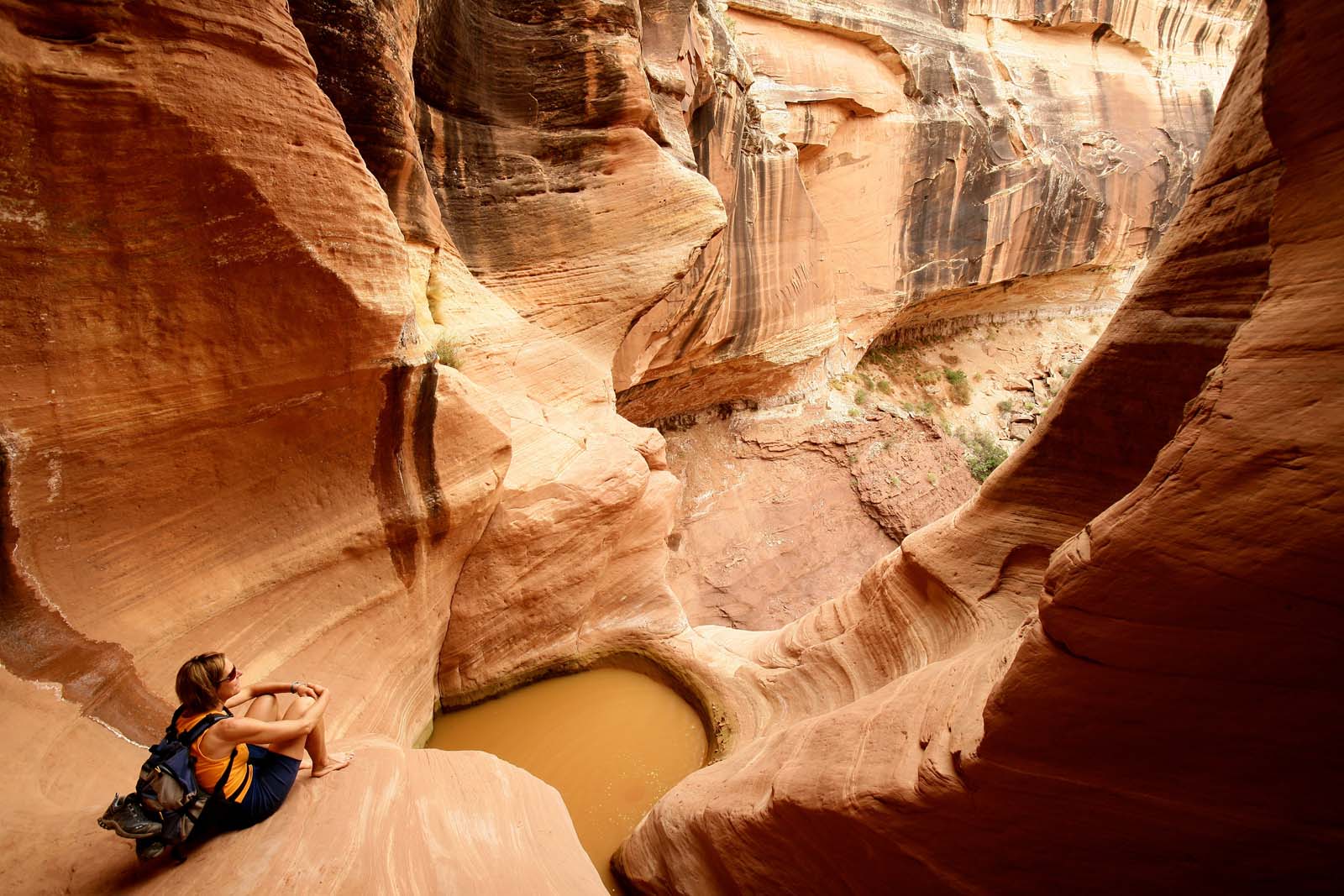 In the city, a pothole is a failure. A spine-rattling bump on your way to work. A tsk-tsk to politicians hob-nobbing with lobbyists while our roads crumble under our feet.

The exposed sandstone grows hundreds of holes, every size and shape, whittled out by the wind with the tools of pebbles and grit. It’s like this: the wind is a gambler. She picks up small rocks and rolls them like dice. Rolls them again and again until it erodes a little dice-cup for her mad gambling. She’s on a winning streak, she’s not giving up soon.

In a romantic mood I’d call them the stigmata of the southwest, but they may look more like the rock’s acne scars. There are people, I have learned, who can’t look at small, irregular holes without their skin crawling. Trypophobia, it’s called, and in my love for these potholes I wonder if I wound up with the opposite. I could sit by potholes for hours, feeding my trypophilia.

But it’s not just the divots and pools in the sandstone that get me, it’s those who live in them.

Watch: something’s moving down there. 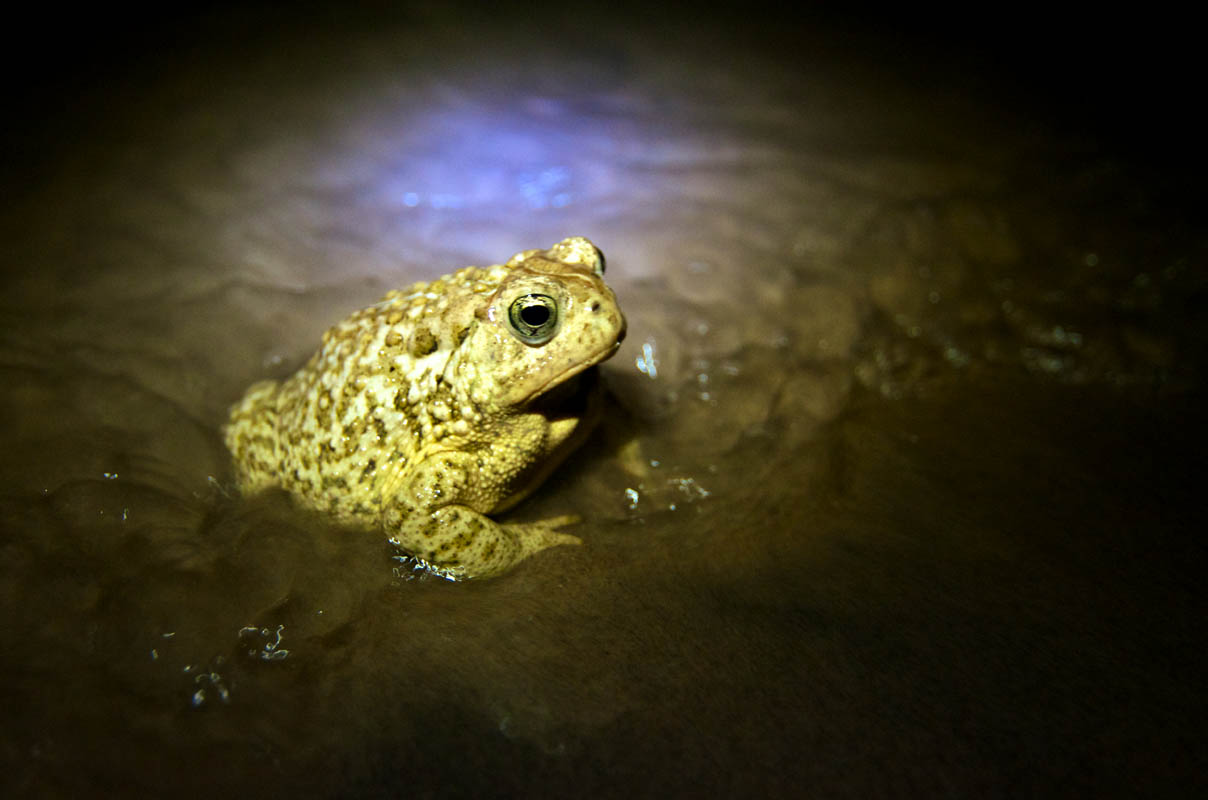 Pollywogs, for one. Before the frogs or toads can climb out of the film of water, they are stuck here legless and wiggling. This is why their name is Middle English for “wiggling heads,” which makes me feel a kind of hearty sisterhood with the folk biologists of the past.

Added to the wiggling there’s the whirligiging: whirligig beetles swim in frantic spirals when they feel your shadow over them. And water boatmen gondola about with their oar-shaped legs. All of them with their own way of moving, of shining beautiful in a sunbeam. The lucky ones among us get to watch.

And watch now, because soon most of the potholes dry up in this heat. Soon it will be only wriggling mud, and then the sun and the gullets of birds will finish off the last of them. The desert’s big Finis: you dry up and you die.

Only not everything. Some of the last dust at the bottom of a pothole sticks around, protected by a little crust. That dust is the pothole’s abracadabra. That dust is brimming with life.

After any of this: sprinkle them into a pan of water, and there they are: moving. 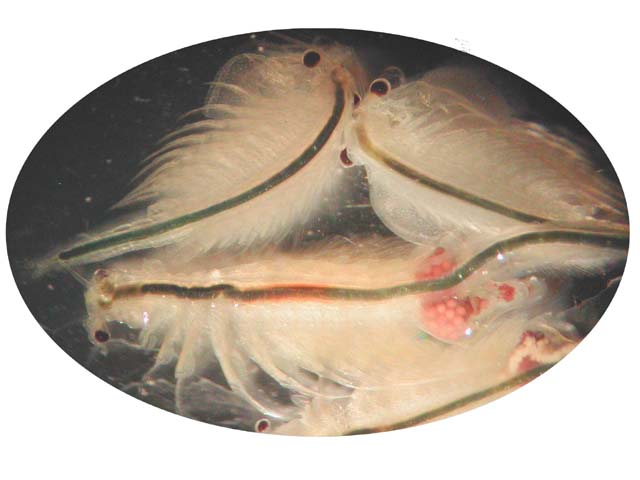 The most famous branchiopod — at least to those who have seen the Great Salt Lake — is the brine shrimp. You might know them by their more marketable name of ‘sea monkey.’ If you don’t know them, imagine a tiny pink feather with two black dots for eyes. These are brine shrimp.

Or look closer: see a short, thin thread, like a spinal cord. A tubular heart runs the length of this body. And sprouting perpendicular from this center are a line of limbs, moving the creature like a centipede through the water. Branchiopods move in a sine wave. Each limb pinching perfectly against the next, moving the ripple along. Metachronal rhythm, it’s called — the same movement a stadium makes when it’s doing the Wave. They comb the water with little bristles, gathering tiny bits for eating.

The largest and most charismatic branchiopod is the tadpole shrimp. When I first saw a tadpole shrimp flitting through a pothole I thought I had rediscovered trilobites. Freshwater, ephemeral trilobites, riding out the waves of extinction here in the middle of 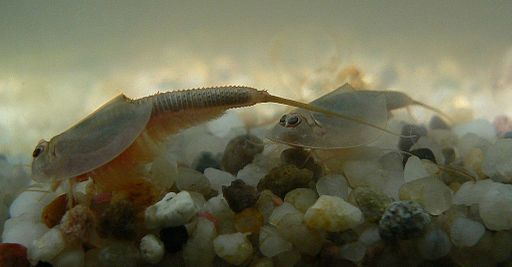 the desert. And even though I was dead wrong, it’s true that I was seeing Something Old. Some of these creatures haven’t changed since the Triassic, fossils of tadpole shrimp date back to the Carboniferous, 300 million years ago.

They are the same in their fossil: an inch or two long, their back an oval shield. They have a primitive eye-spot resting above their two close-set eyes, like the enlightened Third Eye of mystics. At the other end springs a segmented tail, concluding in two long whiskers.

Tadpole shrimp first lived when the continents were smashing together to form Pangaea. When plants invented wood faster than fungus and bacteria could invent a way to decay it, and the dead wood built up in massive layers and got itself fossilized into coal, which is now scraped out and burned into the light of this lamp and whir of this computer and an utterly changed atmosphere. Tadpole shrimp wriggled in those coal swamps and now wriggles in the desert rockpools. 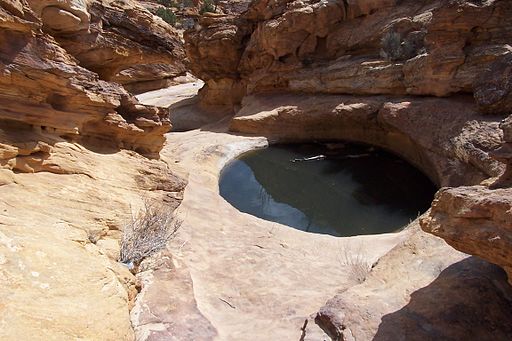 And for thousands or millions or hundreds of millions of years, this is what they do: each summer looks like a catastrophe for the potholes. The water levels drop and drop, the wiggling and whirligigging inside grows more and more frantic. The water dries. The toads move to larger pools or bury themselves in drying mud. The snails build a little tupperware cap at the end of their shell to seal in what water remains. The branchiopods lay their thick-skinned eggs. The creatures of the desert hold their breath for months.

And then, against the odds, the rain comes.