Ode to the Joys of Flat Water: Finding Fun when the River Slows 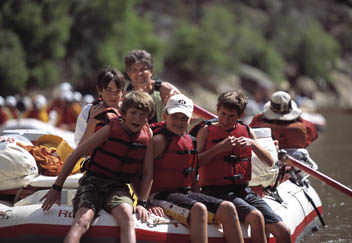 Who says flat water can’t be fun? On a family river trip down the Colorado River, we faced three days of flat water prior to hitting some of the most revered white water rapids in the country. Initially, my boys were disappointed: “I thought we’d have rapids every day.” “This is going to be boring.” That was the last I heard of those words. It was as if for the next three days we had discovered a whole new type of fluid playground. The following paragraphs cover seven things to look forward to if the flow slows: 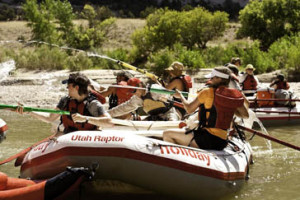 Who says you only get splashed during white water rapids? Not when you remember to bring your water pistols to ensure you can hold your own in the inevitable water fights that erupt, along with a lot of laughter, as one raft duels with another. Every raft has a bucket as well that when the proximity allows, can allow you to douse someone in no time at all. Despite the 90 degree heat, water fights were one of the flat water pastimes that kept us cool. After a truce—once everyone is thoroughly soaked and exhilarated—you’re ready once again to kick back and take in the scenery and sun. But keep your squirt gun handy. 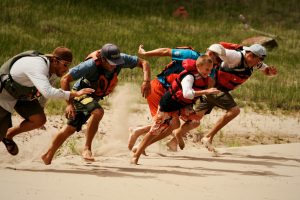 One of the pluses of low-water years is that plethora of sandbars to play on, some popping up right in the middle of the river. This is your opportunity to truly “run” the river. Our guide Brin instigated a race where we would charge down a slightly submerged sandbar located in the middle of the river with our eyes closed. Racing in the dark (eyes closed) is key factor to the fun here. As you run full blast ahead, the sandbar eventually drops away to deeper waters, and so do you. In the end, it doesn’t matter whether you win the “race” or not, it’s all about the final plunge. The kids and the kid-at-heart-adults couldn’t get enough of the thrill. 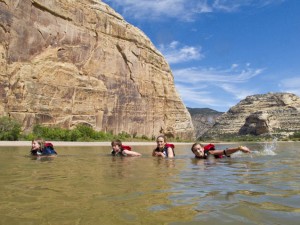 Not quite a rapid but not glassy water either. These wavy trains take on a whole new dimension when you are swimming through them kicked back on your back, with toes and nose forward. My boys would have picked this over a roller coaster any day. Waves playfully splashed us in the face but kept the thrill and adrenalin pumped as you relinquished control to the rush of the river. After our first experience swimming the riffles, my son Riley kept a look out for riffles, exclaiming each time, “Is this a swimmer one?” The guides are pretty picky about which ones you can swim, so when they give you the thumbs up, go for it! 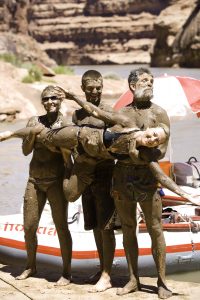 It isn’t so much relaxing as it is silly and…well, a bit liberating. Bathing in a mud bath, enjoying a mud fest, laughing at the “tar-babies” next to you, goes against all those years of trying to stay clean. The best mud can only be found in certain spots—not just on any old river bank. On Cataract Canyon, our mud club was founded at the confluence where the Colorado River meets the Green River. The kids and our guide, Kevin (a kid disguised as an adult), discovered the kind of mud that could be jarred and sold to high-end spas with the right marketing. This area, believed to be the “center of the universe” by the Ute Indians, transformed us into bathing mud beauties and beaus…until we jumped into the warm water for a final cleansing. A lasting memory will be Kevin finishing off his mud spa with two sliced cucumbers over his eyes—people pay a lot of money to get this dirty. 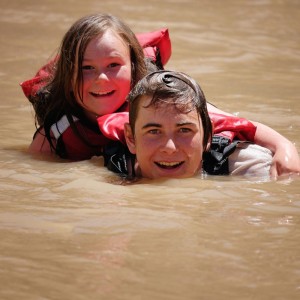 A truly experiential personal float boat. Few things will make you as present and relaxed as floating the Colorado River kicked back in your life-jacket; feet forward and head reclining on the head cushion providing a panoramic view of the scenery slipping by from a fish-eye’s point of view. For those of us who don’t have the patience or discipline to find a serene meditative state, this is a short cut. As the river cradles you, carrying you gently along in its current, there is silence. There are towering red cliffs, drifting clouds, and a generous blue sky. That’s it. Everything else ceases to matter. Floating on my back through Canyonlands National Park made me deeply aware of the moment and being a part of all the beauty that surrounded me. 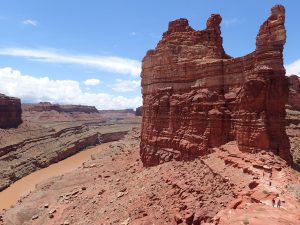 “What floats, has a human form, and absolutely no personality?”
“I spy something that looks like an elephant…”
“I spy a face with a large nose…”
Time on the river together with our kids allowed us not only unrushed time to enjoy one another’s company but a natural place for us to use our imaginations as well. Re-telling and inventing new riddles (it’s a “shadow” by the way) as well as “I spying” animated rock formations kept us all soaking in the scenery and engaged with one another. This kind of undistracted family time is quickly becoming a rarity in our home, as the activities of growing children and working parents crowds it out. The time on the river to play, brainstorm, chat and ask questions was precious time.

“What do you call two Crows sitting in a tree?” Anybody?? 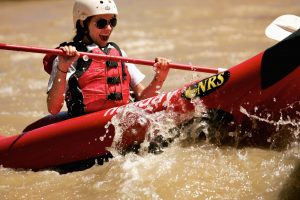 Kids, adults, grandparents, a parent and the youngest children found these blow-up kayaks, known as “duckies” as a fun and peaceful way to float down the river on your own. A few swift strokes allow you to slip through the flat water in order to skirt the shoreline. I paddled near the shore where a big horn sheep was drinking river water and not far behind it a baby sheep waited. Another time, I paddled over to the canyon walls, and ran my hand across rock whose stratifications could be traced back to the time of dinosaurs. I felt so young! Blue herons took flight not far from me, suspended above the water at my eye-level, for a few moments of synchronicity.
My boys felt confident and strong in these duckies as they navigated the river on their own through the flat water. When one of the younger kids tired, we simply tied the duckie up to the raft for a free ride. Be sure to request duckies if you are going to have flat water on your river trips and then make the most of having them along.

What kind of fun as flat-water river moments created on your river trips? Please share!