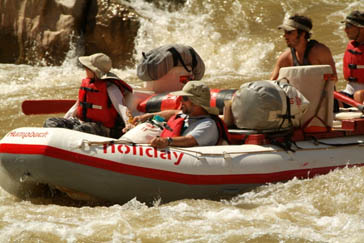 The history books of the river systems of the west are laced with names familiar to guests and guides alike, particularly if you’ve paid a visit to our very own local Green River History Museum.  Some of these names even adorn our fleet at Holiday River Expeditions as an homage to the rich historical and cultural heritage of a long lineage of bold explorers.  Who were these people, and what are they known for?

From the John Wesley Powell Museum

A one-armed Civil War veteran, he led the first and second expeditions to run the complete Green River system (to and through the confluence with the Colorado) from Green River, Wyoming.  He was particularly fascinated with the Utes and other native peoples who made this harsh wasteland their home. 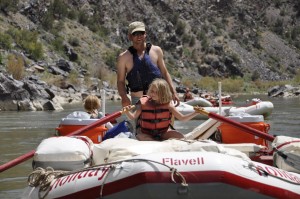 Two river runners who were also frontier trappers and skilled boat builders.  The two collaborated and compared notes after their respective river trips.  Galloway in particular was known for perfecting his own boat design.

These two brothers were photographers who hailed from the South Rim of the Grand Canyon.  Known for their fearlessness, the two constructed a Galloway-style boat and set out down the Green for purposes of capturing video footage.  Incidentally, this writer’s first ever rapid rowed was called Kolb, which makes its home in the Grand Canyon!

Buzz was the first person to run the river solo from Green River, Wyoming all the way through the Grand Canyon.  He also drew upon the Galloway style of boat but made his own improvements and adaptations.  He was known for his humility and love of hunting and fishing; a true frontiersman at heart.

Widely considered a pioneer of commercial rafting on the Colorado Plateau.  He first ran Desolation Canyon in 1940.

Jim was a rancher who made his home near the heart of Desolation; namely, the deepest point, where it boasts a greater depth even than that of the Grand Canyon.  He frequently encountered some of the aforementioned river runners. 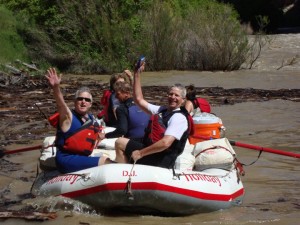 A French trapper and notable early river runner who is among the first Anglicans to leave traceable signs in these river systems; it is still considered a treat to come across one of his inscriptions that have waited hundreds of years for curious eyes.

Now you’re a bit more acquainted with the ‘who’s who of early Euro-American explorers of our beloved river systems.  Keep your eye out for an inscription or other signs of early life in the canyons on your next trip, and as always,

Go with the flow!

He began guiding with Holiday in 2008 and has enjoyed the unique privilege of getting involved with Holiday’s youth trips, including the University of Utah Hospital Burn Camp program.  His writing has been featured on various outdoor online communities including mountaintechs.com and backcountrybeacon.com.  Joe works with troubled teens full-time but manages to find trouble around the country and world in his free time.  He is an outdoorsman by trade, a romantic by choice, a guitarist in a band, and an outlaw in Europe.