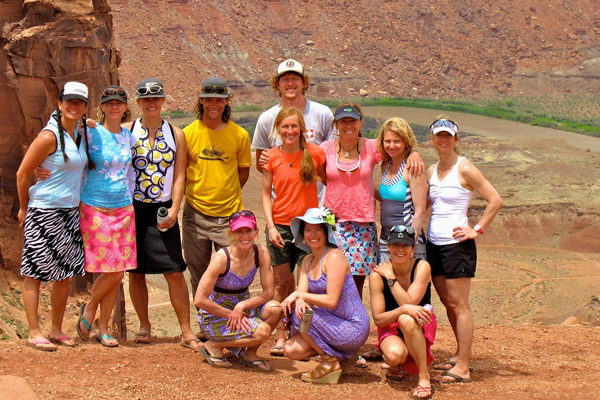 Published June 17, 2013, 8:15 am
“The comfort of the land” propels White Rim Trail bikers.
This is an archived article that was published on sltrib.com in 2013, and the information in the article may be outdated. It is provided only for personal research purposes and may not be reprinted.

This is the fifth in a series on The Utah Bucket List, a collaboration by The Salt Lake Tribune and KUED listing must-do and must-see experiences.

Canyonlands National Park • Of all the adventures we set off for on The Utah Bucket List, there was only one that had me a little nervous.

I don’t get along well with bicycle seats, and the idea of straddling a mountain bike saddle for four days on the White Rim Trail seemed more like a demented form of self-inflicted pain than crossing off a lifelong list of outdoor Utah adventures I had to experience.

It was the incredible scenery of Canyonlands and the opportunity to experience a new part of Utah ahead that overcame the agony I was sure to endure. 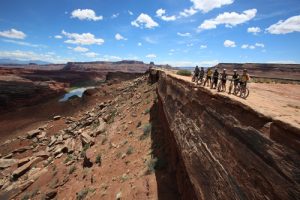 Francisco Kjolseth | The Salt Lake Tribune
Mountain bikers on a Holiday Expeditions mountain bike tour take in the scene at the Colorado River overlook during a White Rim Trail trip in Canyonlands National Park in May 2013.

My grandiose ideas of climbing on a bike a couple of times a week to condition my body for the rigors of a 75-mile ride on the White Rim Trail evaporated like a quick summer rain shower on redrock.

I did manage to pick up one of those fancy bicycle seats with a slot canyon down the middle, plus some anti-chafing skin lubricant (appropriately named Chamois Butt’r) and some padded riding shorts, but these items provided little confidence as the trip loomed.

I was determined to do as many miles as possible and not feel bad about getting off the bike every once in a while.

In the end, it was a desire to soak up as much of the stunning landscape as possible from that dreaded seat and the other riders in our outfitter-supported group that pulled me along for more miles than I had hoped.

Blood on the trail • Hard-core mountain bikers will ride the White Rim Road for 100 miles (from the Island in the Sky Visitor Center down the steep Shafer Trail to the east, south with views of the Colorado River, north on the Green Riverside, back up to the plateau via the impressive Mineral Bottom Road and end at the visitors center).

Others elect a more leisurely tour of roughly 75 miles from a start on the Shafer Trail to the top of Mineral Bottom Road with two or three-night stops at one of 10 campgrounds along the White Rim.

Because the road is open to vehicles, outfitters like Holiday River Expeditions and private parties secure the required backcountry camping permits and use sag wagons to carry camping gear, food, and water. 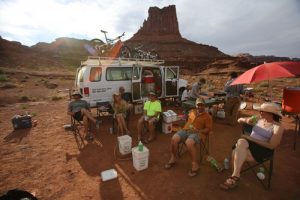 Francisco Kjolseth | The Salt Lake Tribune
Riders at the Airport Campground reflect on the first day of a mountain bike trip with Holiday Expeditions on the White Rim Trail in Canyonlands National Park in May 2013.

Tammi Messersmith says the White Rim has been on her personal bucket list for a while. The Salt Lake resident made her first trip in May.

“It is a little bit of a combination between mountain biking and road biking. As someone who does both, it has been really fun,” Messersmith said. “The camaraderie has surpassed my expectations. The bonding and friendships you make have been amazing.”

Our trip included all levels of mountain biking experience, from riders who managed every inch of the 75 miles — including the dreaded Murphy’s Hogback climb — to me, who spent a decent amount of time on a road cycle in high school, but whose most recent mountain-bike ride was a short spin through the neighborhood two years ago.

Several riders in our group left blood on the trail and probably still have the dirt and sand of Canyonlands coursing through their bodies. They agreed that the pain was worth any possible scars. 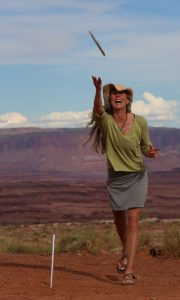 Francisco Kjolseth | The Salt Lake Tribune
Clari Higginson of Salt Lake City throws horseshoes at the Airport Campground during a mountain biking trip with Holiday Expeditions on the White Rim trail in Canyonlands National Park in May, 2013.

“This whole experience seems to just bring hurdles, but also comfort,” said Clari Higginson, of Salt Lake City. “I came with one person I knew and now I have 12 new friends. I feel like I have known everybody for a very long time. Relationships happen quickly and they go pretty deep because we are in the elements together. There is also the comfort of the land. Just being in the quiet. Just the nature and knowing that I am supported by the Earth and people.”

In touch with the Earth • Andy Walker, of Sandy, was on the trip with his wife, Marcia. He found an unexpected comparison between mountain biking the White Rim Trail and his favorite winter activity.

“I can relate it very much to skiing. It is an enterprise with your body where you are totally in control and takes it to the highest level you can. You experiment and push as close to the edge of danger as you want to,” he said. “If you are not afraid to spend some time in the hospital, you can go really fast. I’m afraid to spend time in the hospital, so I don’t push it that hard, but there are times you can really let loose.”

Personally, I found going fast to be overrated. As proven by the brake pads I smoked the first day.

Others agreed that it was the self-powered slower speeds that make the unique experience of mountain biking in a national park so special.

“There are so many opportunities to get in a car and drive around and look at things. There is nothing like getting down into it and really experiencing it,” said Marcia Walker. “It is very empowering [to ride] and getting in touch with the Earth and feeling I’m a part of it.”

On the second day, a hot and headwind-filled ride, I found myself thinking I’d just slow down until the sag wagon caught up and catch a lift.

It also helped that Holiday guide Dave Snee had switched to telling me how long we would be riding to our next stop instead of how many miles remained. Somehow, time on the bike seemed easier to accept than miles left. 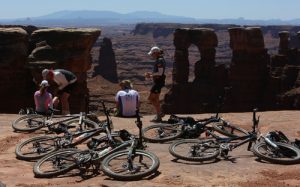 Francisco Kjolseth | The Salt Lake Tribune
Riders on the White Rim Trail in Canyonlands National Park take a water break and take in some of the amazing scenery of the area.
Mountain biking the White Rim trail in Canyonlands in May of 2013It was the landscape that kept me on the saddle. I wanted to see what spectacle nature held for me around the next corner, and I realized that getting there on my own power would make the scenery even more breathtaking.

Permits are required to camp along the trail. Demand for the permits is highest in the spring and fall when the weather is not as hot. Reservations for 2014 can be made available no more than four months, and no less than two days, before the permit start date. Five outfitters are permitted to run guided mountain bike trips. —

View a video trailer of “The Utah Bucket List,” which will premiere in August on KUED-Channel 7, at http://bit.ly/19tPLWx.

Check out the list’s Facebook page athttp://www.facebook.com/UtahBucketList and tell us what you think should be on The Utah Bucket List.