What a Trip: Merrily down the Yampa River 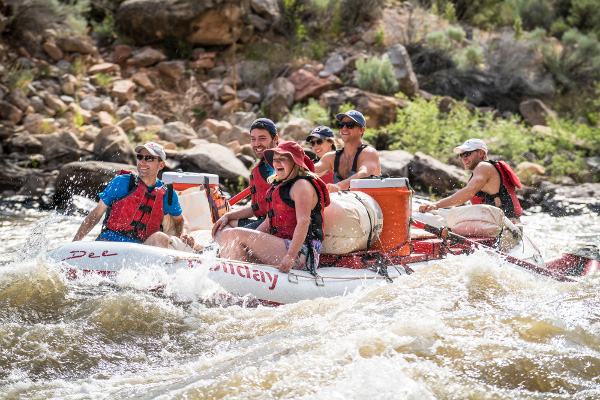 Three generations of the Day family ”hold up” the entrance to Whispering Cave on a side hike on the Yampa River. (Don Day)
July 24, 2014
Our readers share tales of their rambles around the world.Who: Donald Day (the author) of Alexandria, with his son, Jonathan, and daughter-in-law, Julie, of Atlanta, and their sons Jon, 10, and Jack, 8.Where, when, why: A five-day, 71-mile rafting trip on the Yampa and Green rivers in Dinosaur National Monument near Vernal, Utah, the week of June 16. Jonathan and I ran this river in 1986, when he was 12, and we wanted to share the wondrous adventure of beautiful high-desert canyon country with a new generation.Highlights and high points: The Yampa is the only remaining naturally flowing major tributary in the Colorado River system. It runs west through deep sandstone canyons for 46 miles until it joins the regulated Green River, which flows south from Wyoming. We arranged the trip through Holiday River Expeditions and traveled on four-oared rafts loaded with enough food and gear to sustain our group of 25 for the week. We also had two “rubber ducky” kayaks for adventurers who preferred to paddle stretches of the river.

As we entered the Yampa portal, the canyon walls grew steeper at each turn, and we easily drifted into river time. The high cliffs laid bare geological formations dating from 400 million years ago. The boys broke the silence with shouts of delight when we hit the first series of rapids, Teepee and Little Joe. As novice kayakers, they relished their first exposure to Western white water.

The multi-day rafting trip also offered us opportunities to hike side canyons and explore caves and waterfalls. Ely Creek Falls, in particular, was a delight: We climbed the rocks 12 feet above and sat in the water stream to dam the flow. Then we released the icy water, letting it cascade over the others standing below. We also saw many examples of rock art, both petroglyphs (etched into the rocks with primitive tools) and pictographs (painted patterns) left by the Fremont people, who lived in cave dwellings and under rock overhangs between about A.D. 200 and 1300, according to the National Park Service. There was abundant wildlife: lizards, rabbits, snakes, prairie dogs and birds. We watched female Rocky Mountain bighorn sheep with their young move easily along the craggy terrain. On one hike, we encountered a group of males with their regal curling horns.

Each night, we camped on sandy beaches and enjoyed hearty meals and companionship with the other guests. Our guides were always attentive to our needs and tended to their own only after they had completed their chores.

Cultural connection or disconnect: The most obvious disconnect was the stark contrast between living in the wild for a week and the lives we left at home. On our walks, we encountered free-roaming wildlife instead of cyclists and skateboarders. The scent of sagebrush and juniper berries replaced the smell of diesel fuel. And the starlit night sky was a revelation rarely seen back East.

Biggest laugh or cry: Upon seeing a 100-foot geological timeline at the Dinosaur National Monument visitors center, in which humans’ presence on Earth represented one inch, Jack remarked, “Think of all the damage we’ve done in such a short time!”

How unexpected: An emotional moment occurred at the outfitters’ headquarters after our trip, when Jonathan and I briefly reunited with Sherpa San, our guide from 28 years ago. We took photos of our family with guides past and present, completing the circle of three generations.

Fondest memento or memory: Our life’s journey involves many trips, and sometimes we are fortunate enough to repeat some of them. To experience the Yampa again with Jonathan and to share it with Julie and my grandsons was a gift for us all.