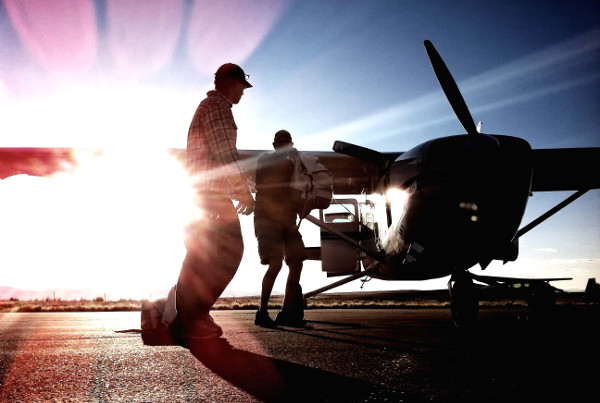 After 25 years, a Sunset writer and his father run Utah‘s family-friendly river again. But this time there’s a new generation along.

THE DAY BEGINS WITH A THUNDERCLAP THAT just about knocks me out of bed. 3:33— hard not to notice a detail like that. I struggle to my feet, stub my toe on a chair, and curse my way over to the window to watch the parking lot of our motel turn into a lake. Twenty-five years ago, the last time I was in Green River, Utah, this would have been my dad’s headache. 3:34, another thunderclap, and he’s sawing logs. My 8-year-old son, Sam, is equally at peace. How strange to be in charge of this sleepy crew. How strange to be going down the Green River again.

For most of my life, I’ve wanted to return to the Green. A few years ago I realized that it wouldn’t be long before I could make the trip with Sam, to run the river with my son as my father did with me. Now we’re all here. After months of planning, I’m finally about to share with Sam my love of the Southwest and its turbulent, muddy rivers. As for my dad? It’s time to repay the favor.

Here in the predawn hours, though, I’m beginning to worry that my grand design is going to be called on account of rain. Daybreak brings little comfort, By 7 A.M. the 17 of us who have signed up for this trip are at the Green River airport boarding the five-seater planes that will take us to our put-in point, Sand Wash (don’t bother looking for it on your AAA map). It starts to drizzle, then gets worse. Thunder follows us as we fly north over Gray and Desolation Canyons. Dad takes pictures out the window, Sam throws up, and eventually, we touch down on a narrow landing strip running down the length of an only slightly less narrow sliver of mesa. Quickly—too quickly, I think the planes take off, leaving us alone with a guide we’ve never met, in the middle of absolutely nowhere.

And, apparently, we’re about to be struck by lightning. Anxiously, our guide hurries us down the cliff face and into the supposed safety of the wash—you know, those places where flash-flood waters go. The wind picks up, blowing sheets of rain into our faces. And then, finally, we reach the river, where four rafts, three kayaks, and several million mosquitoes await us. My dad turns to me and cracks a smile. “Gee, son, I don’t remember this picture from the brochure.”

This, as they say, is a drag. Worse, it’s my fault. I’ve always wondered what it feels like to be the adult.

We board the rafts in a drizzle. The tubular rubber hulls are cold and wet. Sam and I huddle under the 99-cent ponchos I purchased (as an afterthought) at Target. Dad packed for himself. His poncho is more substantial. He also has a spare for Sam, whose Target special rips the instant he puts it on. But the rain stops around midmorning, and by mid-afternoon, it’s downright hot. The first of countless spontaneous water fights erupts. The trip has officially begun.

The next five days pass all too quickly. Dad regales all who’ll listen with stories of what it was like the last time we ran the Green (“You think these mosquitoes are bad? Last time we put in at Ouray. We were covered—I mean, covered.”).

I expected that. I even expected our heart-to-hearts, although I’m taken aback by how many of the things we talk about have nothing to do with me. I guess I thought he was going to reveal some profound secret truth that would suddenly bring my 39 years on the planet into sharper focus. Mostly we just talk—about anything, everything, nothing. It really doesn’t matter. The last time I spent this much time with my dad was probably that summer we ran the Green.

The difference between then and now is more than 25 years. We are different people. It’s difficult at first for my dad not to want to be the one in charge, but he quickly warms to his new role as carefree grandfather. Being a passenger, he realizes, isn’t necessarily the same thing as being the baggage.

Me? I shudder at the memory of the smart-ass kid I used to be and look nervously at Sam. Sullen adolescence is a ways off for him. He doesn’t yet know that laughing at your father’s jokes isn’t cool.

Fact is, Sam is having the time of his life—a better time, I think, than I had all those years ago. Stealing plastic buckets from other boats to render them helpless during water fights becomes his obsession. At times I find myself jumping into the river on his behalf in pursuit of an errant bucket. For the most part, though, I’m content to let him fight his own fights, which means I don’t rebuke my fellow river rats when they plot and carry out sneak attacks on my son. Heck, I help ’em.

He gives voice to his awareness the second day out. By now he has figured out how to paddle a kayak, which allows me to lean back and shut my eyes with nothing to disturb the peace but the sounds of water dripping off the oars and muffled voices echoing off the canyon walls. I had forgotten about these sounds, but now they make this arid, inhospitable place feel as cozy as home.

Normally, Sam would be filling this vacuum with nonstop chatter story upon story, question upon question—but this day he is almost pensive, if an 8-year-old can be such a thing.

He stops paddling, looks around as if to see if anyone is listening, and straightens his hat. “Dad?” he asks. “Will we take this trip again when you have a hearing aid?” It’s a reference to my dad’s earpiece. I look at him, marveling at his ability to gaze so unflinchingly into the future, “Maybe when I have a hearing aid?” he adds.

“Sure, son,” I answer, “we can come back here any time you like.” Only, I may have to take his younger brother first.

The Green is a good river for families and beginning river-runners. It has all the qualities of the Colorado River (it’s remote, big, and muddy, with sheer canyon walls above), but it’s not too rough (although, for the record, I was thrown from my inflatable kayak at Three Fords Rapid). What to expect. Early in the season, the water runs fast and high, and the mosquitoes can be pretty bad. We went in August, when the river moves slower, the rapids are rockier and trickier, and the mosquitoes are largely absent (except up at Sand Wash and at the first night’s campground near Little Rock House Canyon). If the Green has a demon, it’s the mid-afternoon wind, which, to the consternation of the guides, blows up canyon, occasionally making rowing torturous work. Outfitters. Several commercial outfitters lead trips down the Green. We chose Holiday River Expeditions, in part because its headquarters is right in the town of Green River and takes ages 5 and up. Be sure to ask for a kayak (Holiday usually brings three kayaks for river-runners to share at no extra charge). For a free Holiday catalog, call  (800) 624-6323. Food and lodging. The best place to eat in Green River is Ray’s Tavern (25 S. Broadway; 801/564-3511). Holiday has a pre-trip meeting with river-runners on Sunday evening, so you’ll need to book a place for the night. You may also want to book a room for the night you get off the river (the trip ends about 2 although some people just showered at Holiday’s headquarters and hit the road. For more information. If you get into town early enough on Sunday, visit the John Wesley Powell River History Museum (885 E. Main; 801/564- 3427).