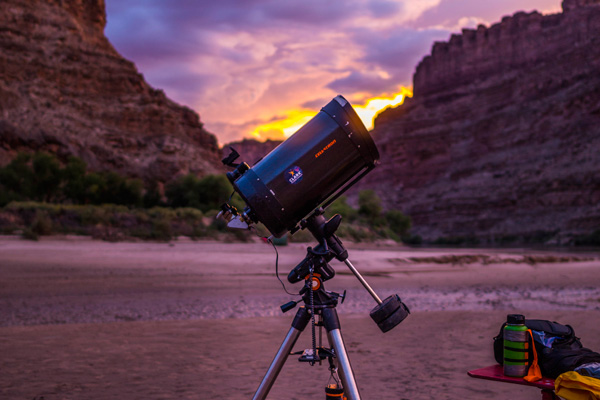 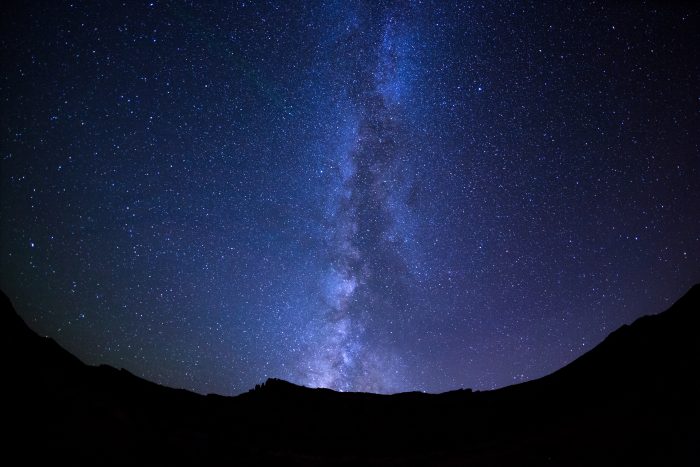 IMAGE 1 OF 2
Camping under the Milky Way in Canyonlands National Park in Utah. Canyonlands has one of the darkest skies in North America, making stargazing from campsites a highlight of any trip.

A shooting star flashes across the night sky, but I’m out of wishes.

I’ve already ticked off dozens of desires, one for every silver streak I’ve glimpsed since the sun dipped below Utah’s red sandstone horizon an hour ago.

What I’m witnessing isn’t a meteor shower; it’s just a typical Thursday evening in Canyonlands National Park. But this corner of southeastern Utah sits so far from city lights that it’s one of the last remaining places in the United States where you can still see the stars in their full and unadulterated glory.

In this rare patch of unpolluted sky, the universe’s own wattage takes center stage.

Countless stars — of both the shooting and fixed varieties — are crowded into the blackness above me, making the sky look like an immense disco ball. Camped beside the White Rim Trail, 60 miles from any streetlamp or neon sign, I’m discovering that nights here are, in fact, anything but dark.

Most visitors come to Canyonlands for the daytime views, which are just as dazzling. The stark red-rock cliffs and spires of southeastern Utah look like no other place on this planet, and some of the most staggering panoramas are found along the 100-mile White Rim Trail through Canyonlands’ Island in the Sky unit. 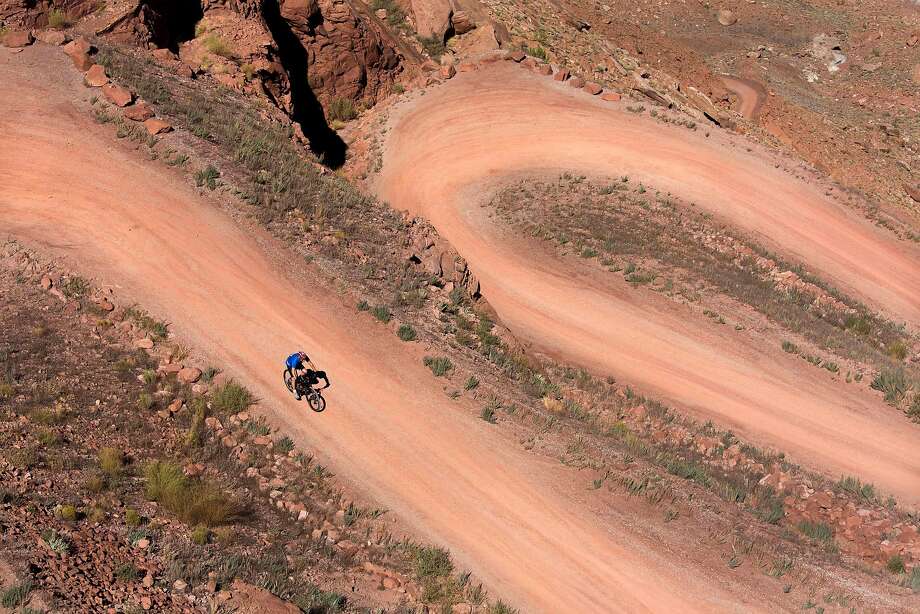 Photo: Sam Watson, Special To The Chronicle
Mineral Bottom Switchbacks. White Rim cyclists are greeted with a 900-foot descent to the Green River at the start of their trip on the White Rim Trail.

Super-fit mountain bikers and tourists in rental jeeps complete this loop in one long day. But I’ve opted to bike it over four days, which shortens the distances to a more manageable 25 daily miles — and gives me three nights to appreciate the region’s spectacularly starry skies. By camping at backcountry sites situated along the trail, I can give equal attention to the scenery after sundown.

That eye candy includes a view of the Milky Way that stretches from horizon to horizon.

“What you’re looking at is an arm of our galaxy measuring 70 million billion miles,” says my guide, Tom Beckett, an astronomer from the Clark Planetarium in Salt Lake City. “It’s the biggest thing you can ever lay eyes on.”

Pondering such immensity makes the vast canyons I ogled that day seem rather small. And I seem smaller still, a 5-foot mountain biker sitting in a camp chair, head tilted up at worlds beyond her comprehension. Another shooting star sparks across the sky.

“Most shooting stars are just tiny particles of dust entering the atmosphere,” says Beckett. “Isn’t it crazy to think that a piece of dust can actually produce such flash, such drama?”

My brain reels as I adjust my sense of scale to the universe’s norms. Pollen-sized specks create big sparklers across our sky. Yet the Milky Way is just one limb of a much larger galaxy — one of many such galaxies scattered across the universe. The realization makes me feel tiny but hardly insignificant. I am, after all, part of something that’s far greater and more awe-inspiring than I’d ever imagined.

These days, most humans can’t see the stars. Ninety-nine percent of the U.S. and European populations now live beneath skies that are infiltrated by city lights. And scientists estimate that in 10 years, there will be just three places in the U.S. where people will still be able to see the Milky Way. One of them is the Colorado Plateau, a swath of rugged desert canyons spanning the Four Corners region of western Colorado, southeastern Utah, and northern Arizona and New Mexico.

Given the region’s significant number of national park units (27 of them, including Black Canyon of the Gunnison, Canyonlands and Grand Canyon), the Park Service is leading the battle against light pollution across the Colorado Plateau in an attempt to preserve its uncorrupted night views. In 2013, the National Park Service established the Colorado Plateau Dark Sky Cooperative to promote responsible lighting strategies in the parks and their surrounding communities. The cooperative also organizes “star parties” and trains local raft and mountain bike guides in night-sky interpretation.

Some outfitters, such as Holiday River Expeditions, invite astronomers on their trips so participants can get expert commentary on the astronomical features they’re seeing.

“The goal is preservation through interpretation,” says Beckett as we pedal along a sandy Jeep track that parallels the Green River. A wall of orange cliffs rises abruptly from the far bank. The desert sun sears my shoulders.

“We want to let visitors know that they can expect dark skies here,” Beckett explains. Because as “astrotourism” gains momentum, its profit potential motivates business owners in Moab and other communities across the Colorado Plateau to exchange Las Vegas-style billboards for subtler signage that preserves the night-sky scenery that visitors value.

Already, the public’s interest in stargazing is spiking. State and national parks across the Colorado Plateau report that their night-sky events are the most popular of all programs offered. And national park surveys indicate that 65 percent of this region’s visitors now consider nighttime views to be important or very important, compared with just 10 to 15 percent in the early 1990s.

Outfitters also are receiving more requests for night-sky interpretation, so the number of raft and bike journeys that include some sort of astronomical component is on the rise.

Rafting is easy, aerobically — the river sweeps you along — but camping at the bottom of a canyon obstructs your view of the heavens. Thus I opted to mountain bike the White Rim Trail, which winds across wide-open sandstone benches with sweeping views by day, and by night.

The sun’s glow has long faded behind the jagged sandstone horizon, but in our camp, no one turns on a light. Even headlamps are verboten, per Beckett’s orders. White light — especially harsh LED versions — blinds us to the stars by eating away at the protein that encases our eyes’ rods (the parts we rely on for night vision).

One might say I’d already seen enough. Earlier that day, I pedaled beneath towering buttes and peered over cliffs that plunged to unseen depths. Rivers sliced this arid, treeless land into innumerable tiers, each a different color: Ashen grey, amber, and crimson rocks were stacked one upon another, like an immense layer cake.

Now, it’s time to shift my focus from Earth to space.

Beckett has aimed his 11-inch Celestron telescope at the Andromeda Galaxy. Through the lens, it looks like a spider’s egg sac: opaque and puffy, filled with — who knows? Black holes, say some astrophysicists. What else might our galaxy’s neighbor hold? 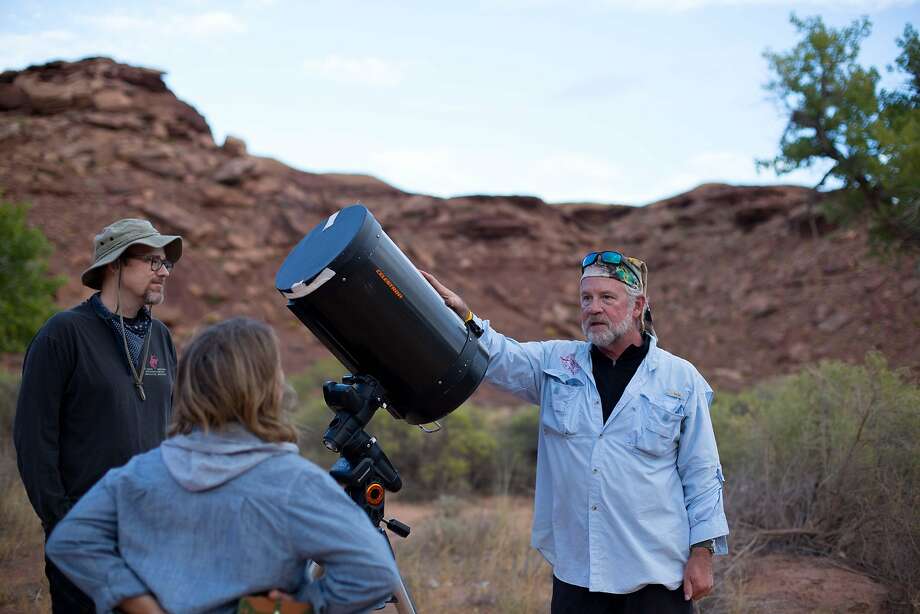 Photo: Sam Watson, Special To The Chronicle
Tom Beckett, a lawyer, guide, and astronomer, explains the nuances of his telescope.

I don’t know, but I wonder about it until fatigue from the day’s biking slows my thoughts. I don’t need a lantern to find my tent; the starlight is so bright that I can plainly see my path.

Except that I can’t bring myself to go inside. With the constellations glittering like fireworks frozen in the night, I feel reluctant to retire beneath any roof, even one made of nylon. So I yank my sleeping bag and pad onto the soft sand and lie down beneath the stars.

I watch the eagle soaring overhead, and the scorpion snapping its pincers in the southern sky. I learned their outlines as a kid, but I’ve never seen them look so full, or so bright.

My eyelids feel heavy, yet I keep yanking them open for one more look. I feel like I’ve been transported back in time, to an age before Edison’s invention transformed our world. I am seeing the sky as our ancestors had for millennia.

It is a wilderness of stars.