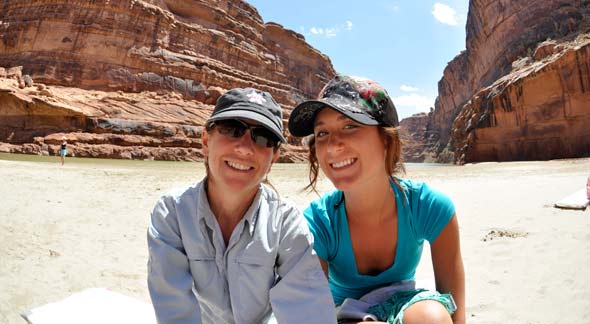 I’ve never been much of a water baby.  In fact, I can’t swim. What lured me to Holiday Expedition’s women’s-only river spa trip wasn’t the Ansel Adams- inspiring cliffs and winding rivers of Idaho, but the promises of massage and meditation after a rough day of rafting. Pampering, now that I could relate to. But upon arriving at the Salmon River in Northern Idaho, I wasn’t sure whether I could relate to anything else. For one thing, I didn’t look like anyone else. “Your skin doesn’t get out much, does it?” asked Mary Wilson, the yoga instructor. “You’re so white and tender, if we run out of food, we’ll eat you first,” added Cynthia, a fellow rafter from Park City, Utah.  And I’d been worried about black bears!

Women Who Run With the River

Helping women find their vision of life was the goal when massage therapist Deanna English-Burdick, RN., first invited friends on this women’s-only trip down the Lower Salmon River in 1980. The four-day trip became a spiritual “river spa” four years ago when holistic treatments were added. A massage and spiritual makeover were’ right up my alley. I’d already asked about phones (none!) and cased out the crowd for wristwatches: three (one mine) among 22 women.

Others were more curious about the day’s plans. A guide promised, “Nothing big. First, we’ll hit Roller Coaster [a Class IV rapid], and then it’ll be quiet for a while.” This was supposed to be comforting. But all I could think about was my bad dream the night before bobbing rafts, and me nowhere to be found.

As we floated along, I did relax. I’d just begun to admire how light flickered blue on the deep-green water when I heard the roar. Then, the water began bubbling like a witch’s cauldron. We braced ourselves as waves crashed over the raft and us. We survived and were floating again. I noticed the vivid, cloudless sky and the gentle slicing of our guide’s oars through the water. Below, boulders lined the clear river.  Above, velvety olive hills draped as softly and fully as a taffeta gown. By the time we faced Demon’s Drop, I welcomed the entertaining break in our placidity.

It wasn’t until later that night when a storm-tossed our tents like tumbleweeds and stabbed the inky sky with electricity, that I was again struck with my fear. But Mary was at the ready, painting a mental image of me lying on a hammock, swayed by a gentle breeze. Soon, I let go of my fears and fell into a peaceful slumber.

Winding Down to River Time

By the trip’s end, I’d become comfortable with the water and the wilds. I didn’t mind the sand that still clung to me at home several showers later, and more than a day passed before I could bear to put on my watch. Two weeks later, I remained spiritually on the Salmon, reflecting, drifting placidly. No clouds, no rush, no worries. The river is now my mantra.

Michele Meyer is a freelance writer in Houston.