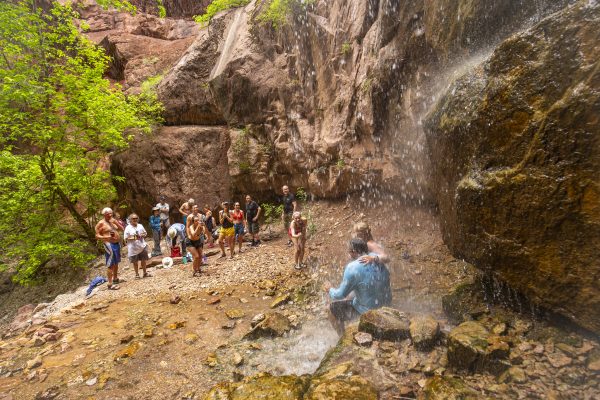 Years ago I ran a river my first and, until recently, my last. What I remember most about that event is the heart-stopping, numbing terror that took over my mind, my body and my senses as the flimsy rubber raft careened through water swollen by spring runoff and undammed by man or nature.

The fear was almost as powerful as my aversion to looking foolish, cowardly or unsophisticated in front of the group of new acquaintances whom I wanted to impress for all kinds of professional and personal reasons.

Back then, I took my assigned seat in the middle of a three-person raft—the seat with no oars, no handholds and absolutely no control over my own destiny—between two equally inexperienced rafters, a Manhattan couple who joked that the closest they’d ever been to a river before was the third-row seat at the premiere of Deliverance. We had no life jackets to keep us afloat if we flipped no helmets to ward off a blow from a wayward oar, and no instruction from anyone about that particular river, its hazards and rapids.

As it turned out, the river was angry and wave-tossed. The other woman in my raft didn’t seem to care if the rest of us thought her cowardly or foolish—she shrieked at the top of her lungs from one set of rapids to the next. I tried to ignore her, to keep her fear from overwhelming me, but one thing she shouted to her husband got through to me: “You said this was going to be fun, and it’s not fun!”

My sentiments exactly. Terror has its own kick, but it’s not one I find thrilling or erotic; so when we pulled over to a quiet place in the river after two hours of the closest I ever want to come to a near-death experience, I summoned up what courage I had and announced that I was frightened way beyond my ability to cope, that I was the sole support of two minor children and that I wasn’t going on. I felt 16 again, remembering a fast car I’d been in then with kids I also wanted to impress, kids bent on playing “chicken,” and too chicken myself to say no. I lived through that incident, but a friend in another car did not. She seemed to be walking beside me now as I hiked out of the woods, accompanied by one other person who told the group she was just doing it to keep me company but admitted to me privately that she was terrified, too. That day we forged an on-going friendship, and when I told her this summer of my plans to raft another river, she told me I was crazy.

Perhaps I was I thought, as I drove across Utah on a cloudless, magnificent July afternoon en route to the headquarters of Holiday River Expeditions. Waiting for me were 44 miles of white-water rapids on the Green River, 18 strangers and 4 nights of camping out in the isolated back country and canyon lands of Dinosaur National Monument—from which there’d be no hiking out. And I was scared. Scared of the river, mostly, although the rough conditions and snake-filled canyons I expected to encounter and the unknown people were worrisome, too. It was time to put my fear behind me.

The night before the trip, alone in a motel on the Colorado-Utah border, I had second thoughts also third, fourth and fifth ones, in which I heard the voice of the friend from my last rafting experience: ‘Are you crazy?” But the next morning I felt a bit more confident. The guides seemed smart, fit, and extremely well qualified they had rafted major rivers all over the world and had years of experience on this one. Their equipment was in excellent condition, including helmets, life jackets and handholds. And even the most difficult rapids are less frightening when you run them in rafts guided by experts, with all the appropriate safety gear and procedures, and in midsummer when the river is at its least dangerous. So in the odd way life has of making you face your worst fears when you least expect to, confronting something quite different from what I had expected became the real challenge of my trip down the Green River.

The names of the rapids were scary: Hell’s Half Mile, Disaster Falls, and Whirlpool Canyon. But in fact I’ve been more shaken on rides at Disneyland. In spite of the ups and downs and the turbulence when the rapids had us in their grip, I never felt out of control. And because I’d been carefully instructed in how to handle myself even if the raft flipped, I forgot my fear of the river and focused instead on another.

I have always feared blindness. While for some people it’s mobility and for others hearing, for me the worst fate imaginable would be losing my sight. In fact, although I once visited a library for the blind to record a book I’d written, I never went back after that. I was uncomfortable in the daily presence of people who personified my deepest fear, and equally troubled by my discomfort.

As it happened, there was a blind woman in the group of rafters, and our introduction summoned up old troubling questions. A 35-year-old, Monica had been a mathematician with sight until diabetes claimed her vision at the age of 22. Since then she had created a new career as a rehabilitation specialist, teaching other blind people how to use computers (What would I do if I couldn’t see to read or write?), skied, climbed and sailed (. . if I always had to be tied to a guide, a dog, a cane?), and fashioned a marriage clearly based not only on love but also on mutual respect and equality (… or if I had to be dependent on someone else?).

Even if the rapids lived up to my expectations, I realized, they would be nothing compared to the obstacles this woman faces every day. So I watched in awe as Monica took the lead position in the 16-foot raft that some of the group paddled each day. It was much tougher than being a passenger on the oared rafts, whose guides did all the work, but she liked it better because her highly developed hearing allowed her to gauge the size, strength and distance of the next set of rapids.

Monica laughed louder than anyone when we climbed a wave, careened off a rock, plunged bow-first into a maelstrom of white water and came up sputtering. On our afternoon hikes into the canyons—on steep, treacherous, slick rock trails that even the local wildlife preferred to avoid—she climbed more sure-footedly than anyone, her hands placed lightly on her husband’s hips, her mind’s eye on the waterfall that awaited us at the top of the canyon and the Indian rock carvings and drawings that we saw and described to her along, the way.

In the afternoons, when we made camp at the river’s edge, Monica set up her tent faster than anyone else, and when we complained about how our sun- and water-ravaged hair and skin looked, she laughed and told us that she thought of all the women as beautiful and all the men as handsome_ “You guys are just like those folks in Lake Woebegone,” she said, and that is how we imagined ourselves from then on. She didn’t miss a chance to swim, hike or paddle, and she did it all with good humor and grace. And during those lazy intervals on land she put us totally at ease by joking about her occasional clumsiness, so that we could kid her, too.

One day, after we’d made camp, I sat on the beach watching as Monica and her husband stood together waist deep in the river while he washed her hair, an act of such simple devotion that it moved me to tears. The person sitting next to me passed me her handkerchief—a woman who, like me, had come on the trip by herself. “I thought I was really being brave,” she confessed. “But compared to her courage, it’s nothing. I wonder how she copes.”

Just then there was a loud splash as blind wife pushed devoted husband into the river with a whoop of laughter. Maybe that’s how, I thought; she doesn’t let him, or anyone, take her blindness so seriously that it comes between them. And I realized how often I let my fears come between me and other people, or between me and new experiences.

None of us had previously spent this much time in close surroundings with a person who was so physically challenged—extraordinary-nary, given the number of Americans with disabilities and given the diversity of ages, backgrounds and nationalities of our group. But that week opened our eyes. “What I love about being on the river is being free and untethered,” Monica said, and we understood how our own fears—of snakes, spiders, white water, loneliness and, of course, physical disability—tether us to the safe, the familiar. Then and later we shared many of those fears, with her and among ourselves. We laughed enough to chase our fears away, and in their place, in those unguarded moments, we discovered one another.

I came off the river with a newly developed love for canyons and rivers. Next, I will raft the Grand Canyon, respectful of the rapids but not afraid of them, thrilled at the prospect of spending more time in the high desert and canyon country I quickly came to appreciate. I gained a heightened concern about the uses and misuses of our natural resources, an understanding of cause and effect so visceral that I don’t turn on the tap anymore without thinking about where water comes from or recalling the joyful noise -that a river like the Yampa the last undammed water in the Colorado system) makes when it runs free. I realized once again that adventure turns strangers into friends and companions. And I learned that the biggest fear of all is the one you haven’t tried to face.

• JANE ADAMS is a Seattle-based writer whose newest book is I’M STILL YOUR MOTHER: HOW TO GET ALONG WITH YOUR GROWN-UP CHILDREN FOR THE REST OF YOUR LIFE (Delacorte).