Get a kick out of Bucket List: Cataract Canyon (hold on tight) 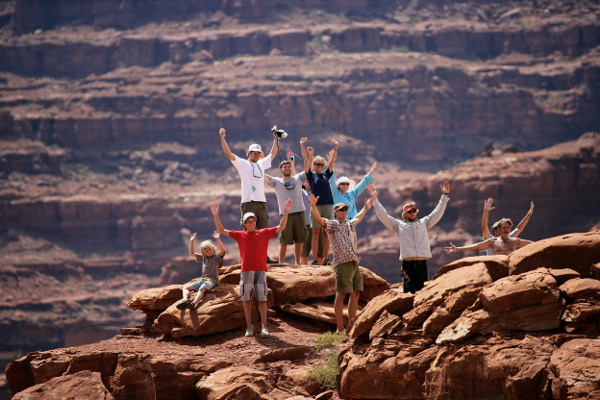 Published June 17, 2013, 8:15 am
Some come to ride the wild rapids; some come to flee civilization.
This is an archived article that was published on sltrib.com in 2013, and the information in the article may be outdated. It is provided only for personal research purposes and may not be reprinted.

Canyonlands National Park • The Colorado River in southeastern Utah is a tricky creature.

It cradles and coddles rafters for lazy, languishing days before throwing them into a cascading crush of chaos and conceivable catastrophe in Cataract Canyon.

It was something explorer John Wesley Powell experienced in a dreadful way 144 years ago and an adventure that people today travel from across the world to experience, albeit in much less dramatic fashion.

Selecting places to visit for The Utah Bucket List series of stories and the premiere of the documentary on KUED in August was no easy task. A five-day float trip on the Colorado through Cataract Canyon, however, was one of the first items in the “must-do” column.

It is no surprise that several items on the list are based around water adventures. Living in the second-driest state in the nation has a way of encouraging Utahns to flock to water-based activities at every opportunity.

A trip through Cataract Canyon more than fits the bill. Even in the driest years — 2012 was one of them — the Colorado River can still quench a thirst for adrenaline-fueled transportation through canyon country.

After two days of floating the river and annoying the entire flotilla with his well-aimed squirts from water guns, 9-year-old Itamar Even, of New York City, was ready for the rapids — kind of.

Itamar was part of a group arranged by Bob Hollingsworth, of Woodland, Calif. Hollingsworth, 82, who had started a tradition of setting out on big hiking trips with high school buddies after they retired.

“We started to get a little old for that, and I said, ‘Why don’t we do some river rafting,’ ” Hollingsworth said on Day 3 as part of the group made the hike to the canyon rim to see the amazing Doll House area. “We have done a lot of trips in Utah. We love Utah.”

When the Colorado gets roaring, moving more than 30,000 cubic feet per second (CFS), it becomes epic.

“It’s the biggest white water you can find in the country,” said Steve Young, a Canyonlands National Park river ranger. “A certain thrill-seeking crowd shows up at that time. It’s kind of a bucket list within a bucket list.”

The Colorado River remains unimpeded by dams from Cataract Canyon upstream, and that leaves seasonal flows up to Mother Nature.

“The river is free-flowing,” Young said. “That is the unique thing about the Colorado through this stretch of canyon. You just never know what you will get.

According to the Canyonlands National Park website, the highest recorded flow in Cataract Canyon was 114,900 CFS in 1984. Scientists have estimated a possible flow of 225,000 CFS in 1884 by dating driftwood piles in the canyon.

The ever-changing flows make running the rapids a challenge. Some rapids get washed out during high flows but can be difficult to maneuver at lower-water levels. Guides and private groups stop at many of the 30 rapids to scout out the safest route through Cataract.

Private and commercial-rafting permits to float the 47 miles of the Colorado River through Cataract Canyon are required and available through Canyonlands National Park, but most river runners launch at the Potash ramp about 20 miles southwest of Moab and take in a couple of days of leisurely floating the 48 miles to the confluence with the most action coming from water fights.

Hikes to petroglyphs, pictographs, and ancient dwellings are scattered in the first days and help visitors establish a sense of the place in which they are suddenly immersed.

There is no evidence the ancient people of the area attempted to run the rapids, but it is obvious they depended on the river for life.

While people still depend on the Colorado River for life — just far away from Cataract Canyon — the major water artery of southeastern Utah still draws folks to its banks. They come for the thrills of floating like a cork through some of the wildest rapids in the world, but increasingly they are showing up to get far away from civilization and technology.

Such is the case for at least one 85-year-old frequent floater with Holiday River Expeditions.

“He had been on a lot of trips. I asked him, ‘Dick, why do you come out here to rough it at your age?’ ” asked Lauren Wood, a third-generation guide for Holiday, which was founded by her grandfather, Dee Holladay. “He said, ‘I don’t come out here to rough it. I come out to smooth it. Things are rough enough in town.’ It was obvious the river had fundamentally changed who he was through the years.”

A five-day workweek on the river for Wood was not really a matter of choice but rather a natural progression, which started about the time she learned to walk.

“I can’t remember a summer without the river being an integral part of my life. I choose to run rivers because I love connecting with people, specifically with people connecting with the natural world,” Wood said. “We live in urban centers, and it is hard for us to remember where the resources come from. It is readily apparent that we need water to survive, and we need beauty to be happy.”

On the final morning of the trip, a rainbow conveniently provided both.

View a video trailer of “The Utah Bucket List,” which will premiere in August on KUED-Channel 7, at http://bit.ly/19tPLWx.

See a video of a rafting trip on Cataract Canyon in Canyonlands National Park at The Salt Lake Tribune’s YouTube site at http://bit.ly/13q8Vcs.

Check out the bucket list’s Facebook page at http://www.facebook.com/UtahBucketList and tell us what you think should be listed on The Utah Bucket List. —

Permits are required to float Cataract Canyon. Private parties can obtain permits by contacting Canyonlands National Park. There are 18 contracted concessionaires that provide outfitted and guided trips through Cataract. Most Cataract Canyon river trips start at the Potash boat ramp about 20 miles southwest of Moab and float 48 miles on the Colorado River before reaching the confluence with the Green. The official start of Cataract Canyon begins shortly after the confluence and runs for 47 miles to the Hite Marina on Lake Powell in the Glen Canyon National Recreation Area.