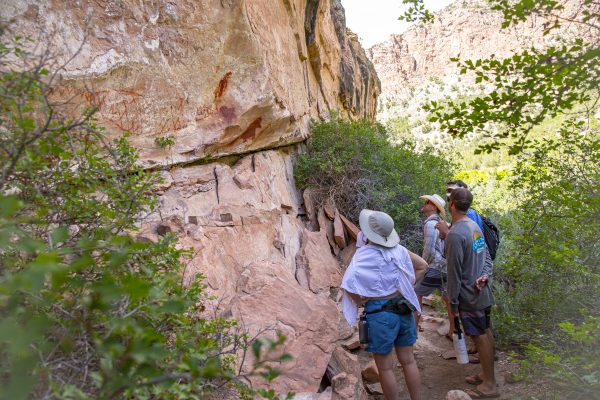 Editor’s note: This is a special advertiser-supported article from the Essential Guide to Paddling The Parks.

Talk to those intimate with Dinosaur National Monument, and they’ll quickly tell you this expansive monument that straddles the Utah-Colorado border really deserves to be known as a ‘national park.’ The monument’s two rivers, the Yampa and the Green, alone should be justification enough to formally describe Dinosaur as a ‘national park; they offer some of the best rafting in the West.

Toss in the incredible fossil remains that are entombed here, the long Native American history, the more recent Western bandit history (Butch Cassidy slept here!), and the rugged wilderness that lies within its borders and Dinosaur easily deserves the ‘national park’ designation.

Not that there’s anything terribly wrong with its ‘national monument’ status. Indeed, that probably fends off quite a bit of visitor traffic and helps Dinosaur retain its wild side. And experiencing that wild side is what makes a visit to this corner of the National Park System so sublime… and so unique.

During a recent float trip on the Green River through the Canyon of Lodore, past Echo Park and massive Steamboat Rock, and then into Whirlpool Canyon and on through Split Mountain, dinosaurs were the last thing on my mind. In a small flotilla of Holiday River Expeditions rafts with two rubber duckies, and one white-water canoe for good measure we quickly passed through the Gates of Lodore, a tremendous rift the river has cut through this section of the Uinta Mountain Range.

It’s that sort of perspective looking up at a cross-section of the mountains while drifting downstream that makes a river trip such a unique way to explore a national park. The Yampa offers an equally impressive, yet scenically different, experience. The soaring sandstone cliffs colored buff, yellow, and tawny that the Yampa pulls you past are more indicative of southern Utah’s geology hundreds of miles away and definitely different from the more aged, crumbly, and ruddy maw of the mountains the Green takes you past.

Both rivers are alive with currents that thread through rock gardens and roar through channels that spew wave trains, pulling you constantly downstream through ever-changing patterns of light, from shadows cast by the cliffs to the full sun reflecting off the leaping waters. Mountains soar up about you, revealing geologic twists and faults. Promontories of rock jut into the river corridor, while canyons cut deep behind them. Landslides and boulders that time sent down into the Green River created, and occasionally continue to alter, the rapids that Major John Wesley Powell and his band of men struggled to conquer in 1869. Disaster Falls in particular rightly earned its name from the major.

A river trip through the Green River arm of Dinosaur allows time to contemplate the Earth’s forces and decorations. And it offers time to truly disconnect from the wired world and reconnect with friends and family. The crew at Holiday River, a company launched in 1966 that has established an outstanding safety record through the decades, floats both these rivers as well as the Colorado River through Canyonlands National Park’s Cataract Canyon. They can help make your disconnect from the real world complete.

On the river, Holiday River’s guides lead you safely through the rapids, intersperse the river running with hikes to limestone overlooks high above the Green or to ancient palettes bearing images both recognizable as bighorn sheep and mysterious as other-worldly aliens. All the while they regale you with the human history that has risen up from those who have traveled the river’s surface and the canyon’s trails.

On the river, the canyons change color as the sun drifts across the sky. Deep reds, vermilion shades, blacks, whites, browns, and buffs paint the rock as minerals add their own hues to the mountains seams. About these earthy tones, greens burst skyward where vegetation has taken root and figured out how to thrive in this arid setting.

At camps tucked up onto sandy beaches with shaded tent sites, Holiday River’s guides prepare sumptuous meals breakfasts of granola and yogurt, pancakes (blueberry or strawberry and peach), or Big Drop omelets; lunches of chicken caesar salad wraps, pasta salads, cold cuts and fresh fruits; and dinners of tender steaks, mahimahi, or pasta. After dinner, relax with the Broom Dance, a comical routine that tests your skills of observation, or

learn more about your fellow rafters through a game of two truths and a lie, or simply watch the sunset stain the mountains while the river gurgles by and the stars slowly poke holes in the night sky.

Nights can be as magical as days. As the sun departs, bats arrive, flitting about to eat their dinner, while high overhead the Milky Way begins to draw back its curtain. Moonglow illuminates the canyon walls, not in the rainbow hues created by the sun, but more a black-and-white or even sepia tone. At one of our camps, the resident skunk came out around dusk. Not to welcome us to this patch of Dinosaur or to defend it with his perfume, but merely to search for any morsel that might have dropped unnoticed from our plates.

Overhead, the moon was bright, casting the monument in yet another light.

The lure of the dinosaur fossils sheltered within the monument’s Quarry Exhibit Hall is not to be minimized. But the pure rawness of the landscape found along the river corridors within Dinosaur’s boundaries adds so much richness to the monument. Until you experience that landscape first-hand, you’ll struggle to fully appreciate Dinosaur.