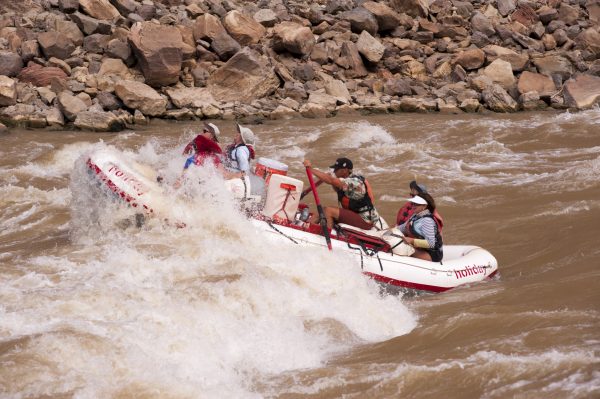 Don’t let the calm deceive you…

You can reach your excitement threshold at Satan’s Gut

IMAGINE YOURSELF ON A STRETCH OF THE COLORADO River that’s like a minefield. Huge exploding pyramidal waves come at you from unpredictable directions. At this point, guests are either burying their faces in the center load or looking straight into the waves with this expression of pure terrifying delight. I remember this guy named Wally. Nothing was giving him enough excitement, but then we dropped right into Satan’s Gut. It’s a staircase-y series of three- and five-foot ledges, rough but perfectly survivable. We bounced, and Wally popped forward into the water and disappeared under a wave. He probably spent less than thirty seconds in the water, but his eyes were the size of grapefruits. You could tell we’d finally reached his excitement threshold.
People do change on the river. There is something very humbling about being at the base of a three-thousand-foot canyon, riding on a current. People behave more decently. Their respect for the river carries over to the way they deal with each other. After seven days, though, this tends to fade a little. That’s why I prefer shorter trips.
Somehow, more than one guest has believed that you end up where you began. That the river runs in circles—that shows you how far out of their element some people are. I’ve had others bring battery-powered curling irons, which they use maybe for the first day. That’s okay. Another time, I remember lying on the bags one night after we’d unloaded the boats. I heard a motor and scanned the sky for
a plane. Finally, I realized the noise was coming from inside the bags. It turned out that a woman had brought along her vibrator.
Like roller coasters, we attract classic thrill seekers, people who enjoy a controlled amount of fear. After intense stretches, people will say, “Can we do that again? Can we do that again?” That’s the real difference between a roller coaster and rafting. The answer is, no, you can’t go back.