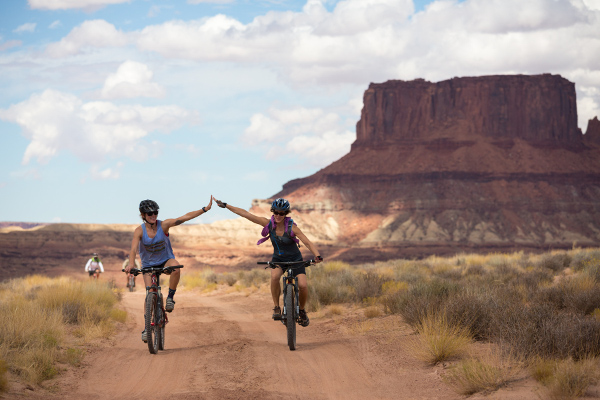 Small People In A


We are hurtling down a road through time. Clinging tightly to my bike as it surges and bucks like a runaway horse fleeing a cloud of bees into the very heart of Canyonlands National Park.

Before me—blurry with speed, hazy with the dust of other riders stretches the White Rim Trail, a beige ribbon that loops and weaves across an immense desolation of stone, sand, and sky. This “white rim” is a particularly tough strata of pale sandstone that geologists call Cococino, all that remains of a prehistoric desert whose dunes once drifted all the way to Canada.

As the road flattens and smooths, the motion of the bike calms, seeming to transform the desert into a fluid realm, one that my companions and I voyage over like a small armada, each alone on our solitary craft. Like life itself, the sailing is sometimes smooth, sometimes rough and rocky, and sometimes you just plain bog down in sand.

The White Rim has everything: forearm-cramping downhills, roller-coaster straightaways, jumps, wall-hits, pin turns, stomach-churning exposure, and the occasional gut-busting hill that reduces everyone to sucking blowfish.

In the evening, stuffed with Dutch-oven lasagna, we kick back under the stars, and the ancient tradition of bull-shitting begins. Well greased by beer, the conversation quickly descends from gross exaggeration to bald-faced lies. The wittiest liars are awarded honorary Ph.D.’s.  ‘What does Ph.D. stand for anyway,” I ask. ‘Well,” Bonnie replies, “BS is for ‘Bullshit,’ MS is for ‘More Shit,’ and PhD is for ‘Piled High and Deep”. Satisfied with her answer, I grab another beer and stretch my aching muscles out on the still warm sand as though I were easing into a bath. Above us, its pinchers extended, Scorpio drifts free of the desert rim and rises into the night sky.  ~Chris Noble

We rode 25 miles of typical Canyonlands dirt road today. Strange formations, fun obstacles, and, of course, the La Sal Mountains rising in the east. Cruising at high-speed with jumps and berms and big drops next to the trail. Night came and Mr. Ph.D. (Jason) gave us lessons in constellations with his official Girl Scout Star Guide. We learned that the Corona Borealis was once full of Mexican beer, that the Little Dipper is more like a little spatula, that the Greeks had way too much free time, and that many of them were hallucinating I’ve never met someone with so many PhD.’s as Jason. ~Jim Zellers

Somewhere ahead two fabled rivers meet: the Green and the Colorado. On another day we trade our fat tires for inflatable rafts, rendezvousing with a group already boating on the Green. In this way, we experience the best of both sides of this desert world, the hit-octane thrill of biking combined with the no less adrenalized experience of running the infamous rapids of Cataract Canyon on the Colorado River.

There is some deeply felt solace in the water. Everyone senses it and comments on it. Water in the desert. Its presence affirms life, in fact, makes it possible. Even though we knew it was here, the sudden vision of the Green River seems miraculous, especially after our 65-mile ride through country that on average is dryer than the Sahara.

The transition from bike to raft requires more than changing gears, it requires a change of heart from the pounding speed and frantic pace of biking, we must slow to accommodate the measured, more natural cadence of the river, which carries us effortlessly on its broad back, but always at its own pace, never ours. The contrast is sublime. Ironically, we travel nearly identical distances in a day. I fall asleep to the soft whisper of flowing water. ~CM.

We run Cataract Canyon with its many rapids and the trip’s climax, Big Drops One, Two, and Three. Swimming is not an option now. A surge of adrenaline shoots through me as we glide down the smooth tongue of the water that drops the lust wave. The raft shudders, pitching nose down, then leaps into the standing brown wall of water towering over us.

We make the big rapids at Drop Two, but the next boat isn’t so lucky. Suddenly we are plucking sputtering rafters from the water. We snag the raft and as much floating gear as we can. In the end, everyone is all right but filled with a new, wide-eyed appreciation for the power of this river.  ~Bonnie Zellers

All the desert varnish is gone from the rocks due to the sloshing water behind the dam. As we enter the reservoir (Lake Powell), it becomes obvious that the trip is finished  Glen Canyon Dam has blocked the river and tamed it and ruined its wild nature I want to go back to the river.  People kill others daily.  They hurt each other, steal each other’s property. Why can’t just one of those loonies direct their energy toward the dam? ~JZ.