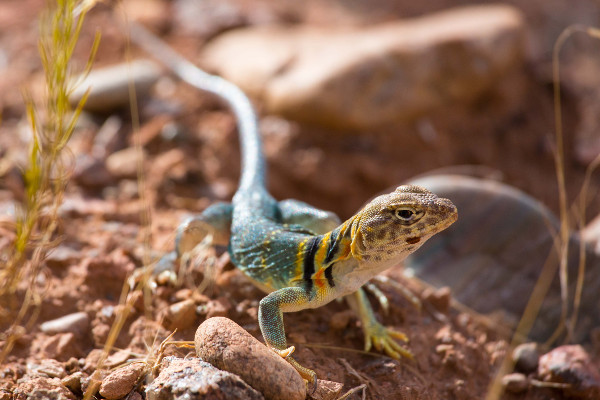 In Echo Park, the free flow of the Yampa still has the potential to move the channel. Female Fremont Cottonwood trees cast their cotton to the wind according to timing that matches the natural high water flows of the rivers. The timing is such that the cotton falls just after the natural peak flow but only in exceptional flood years does the channel move enough that those newly planted seeds are protected from the high flows of subsequent years. After the peak, a successfully planted seedling rapidly drives a tap root down to follow the receding river flows.  Conditions here are so unique that cottonwoods often end up growing in age cohorts that are traceable to individual floods.

This photo shows bank erosion undermining a mature tree as the channel is finally shifting back to the place where it helped plant the tree. 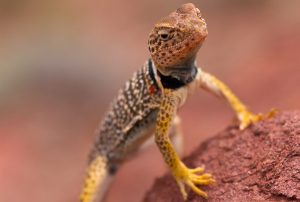 A male Collared Lizard performed a few pushups for us along the Little Hole hike in Westwater Canyon. They are fiercely territorial and will fight with any encroaching males particularly if a female is nearby.  Males tend to be showoffs and will allow people to come within a few feet but be careful as they can inflict a painful bite.  Eating mostly insects like grasshoppers often catching them after a fast chase running on their hind legs. The female is less brightly colored but retains the distinctive black stripes around the throat. Crotaphytus Collaris.

Following extensive testing by the USDA-ARS, the tamarisk beetle began to be released in 2004 in our region.  Beetles have had a great effect in controlling the tamarisk. They defoliate the tamarisk and many of the river banks and river bottoms especially along the Green and Colorado rivers have shown great changes in the last few years. Tamarisk trees are resilient and usually it takes several years and several cycles of defoliation before the tamarisk begins to die.  That said, we can already see in some areas the dead stands of tamarisk have started to be removed. It is amazing to see the new beaches especially after a high water year like this one. In some places, the river banks were once impassible thickets.

Now it is possible to wade through a few willows and reach the canyon flats. A few photos exist from the days before the tamarisk and make for astonishing comparisons. The rivers are rediscovering their freedom and we are starting to see what Powell and the early river explorers or even the ancestral Puebloans might have seen. 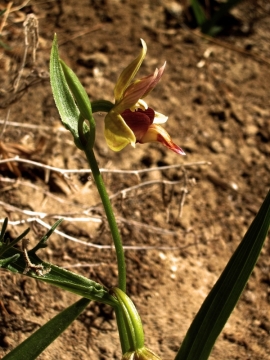 Epipactis Gigantean, sometimes called “stream orchid” is not really that big. Each bloom would fit nicely in the palm of my hand. This orchid would normally be found in very wet habitats rather than in the high desert of Northwestern Colorado in Dinosaur National Monument along the Yampa River.

This particular orchid is growing a little way up the canyon cliff in a small alcove far from any side stream. It is however on the north side of the Yampa River.  Because the geologic layers have a small tilt southward in this area enough that the back of the alcove is moist and even damp from water percolating down. It comes through the Weber sandstone and then runs on a bedding plane in the big Aeolian formation. This extra water allows the orchid to continue blooming into June most years and survive in the alcove as part of a little hanging garden that includes some tiny white Columbine as well. 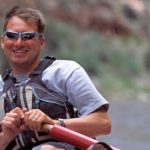 Written by Tim Sattelmeier.  TJ is a long-time Holiday guide, ski instructor, and writer who lives in Park City when he is not on the river and is making plans to take his two little boys on the river next summer.