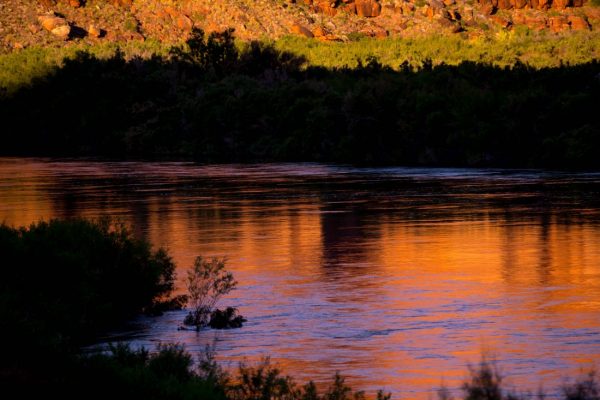 The third in a four-part series on water law and allocation in the Colorado River Basin. By Rica Fulton

Tribes in the Colorado River Basin 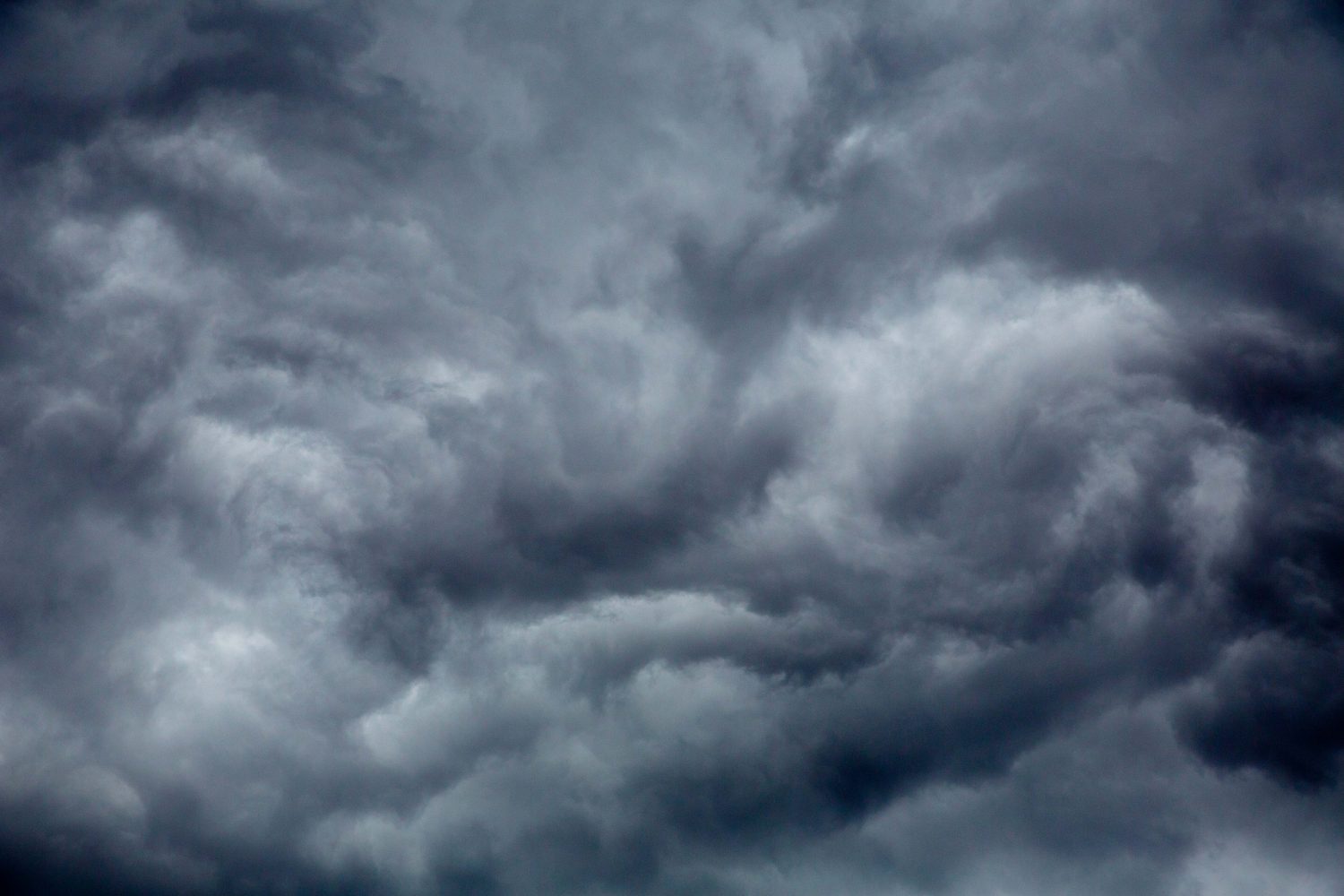 Howard Dennis, Squash Clan Chief of the Hopi Tribe, reminded an intimate crowd in Moab, Utah last weekend, that the headwaters of a river was not in a state, but rather in the clouds.

As children from Second Mesa, Arizona danced to vibrations of song and drum beats, they were asking the creator to bring rain to all people. Howard explained the ceremony, and how they dance for everyone on Mother Earth, regardless of race or religion. Intricate details on headdresses and leather moccasins symbolize rain, and the life water provides to corn and people. Humans are after all, mostly made of water.

The Colorado Plateau has been home to Indigenous peoples for thousands of years. An almost incomprehensible period, long before Europeans and Spaniards “discovered” the region. Water has always been scarce, so often these peoples would live seasonally in regions near reliable water sources, and move during other parts of the year. Irrigation was also used, notably by the Hohokams in Arizona; a method often attributed to the Mormons.

Despite the obvious presence of Native Americans in the Colorado River Basin, and the even-more-obvious need for water in the desert; tribal water rights are still far from being solidified. Section 7 of the 1922 Colorado River Compact, which addresses Native Americans, consists of a single sentence: “Nothing in this compact shall be construed as affecting the obligations of the United States of America to Indian tribes.” The Upper Colorado River Basin Compact went one step further by declaring tribal water rights are to count against the state in which the reservation sits. 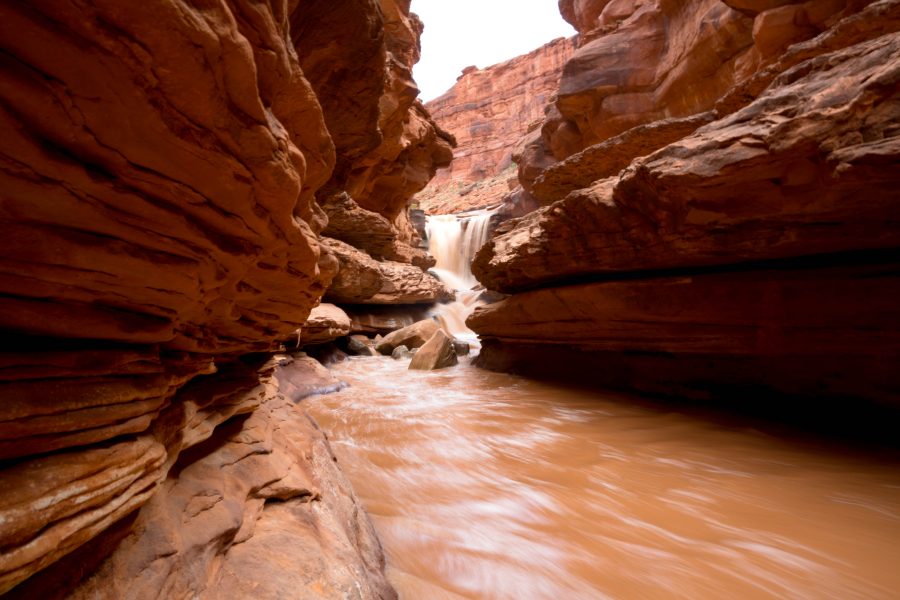 In Parts I and II of this series, we learned about Prior Appropriation and the “Law of the River,” or the body of statutes, compacts, agreements, regulations, and an international treaty that collectively delineates how the waters of the Colorado River Basin are allocated and managed. So how do Native American tribes and individuals fit into this puzzle?

We’ll start in 1908. The Fort Belknap Indian Reservation along the Milk River in Montana was established in 1888, as a tribal homeland. Soon after, non-native Euro-Americans begin moving upstream of the Reservation and using large amounts of water, and building diversion structures. Before long, water wasn’t making it to the Reservation as it used to, of course hindering the tribes already severely diminished homelands. This injustice of first being relegated to a small tract of land, to then have water taken, led to the seminal court case, Winters v. the United States.

Land without water in the arid west, is inhospitable. Water rights were generally not addressed explicitly when reservations were being created, so the Court confirmed via Winters that water is implicitly included with reservation land. Furthermore, the courts assumed Native Americans would develop an agricultural society, similar to the Western narrative of Manifest Destiny, which inexplicably requires water.

Therefore, the Winters case set an important precedent for how water is allocated to Tribes across the American West. Most broadly, the case declared the date a Reservation was established as the priority date under the Prior Appropriation system. For example, the Fort Belknap Reservation was established in 1888, which is earlier than almost all Euro-Americans began using water beneficially. This means, Tribal members on the Reservation have very senior water rights to the Milk River from 1888. 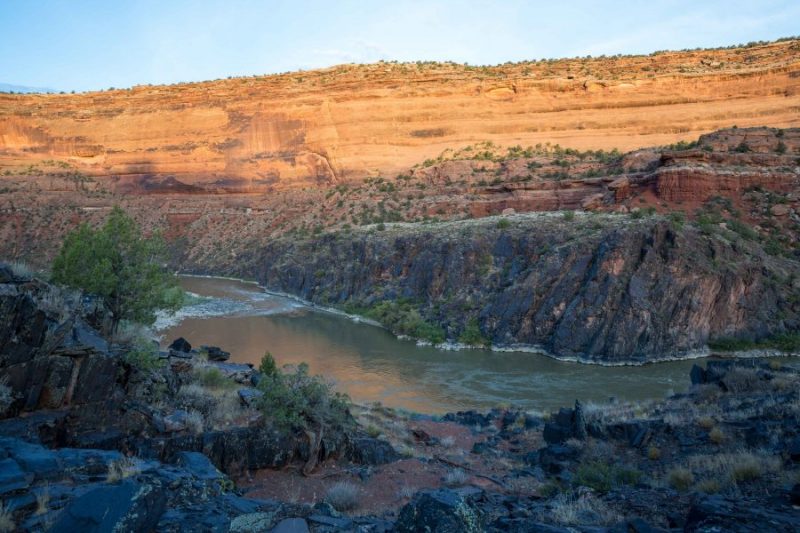 Winters declared that water was indeed included as part of the land within reservations, and how it fell within the appropriative system; however, it failed to address water quantification, and what the quantified water could be used for. In 1963, Arizona v. California began to address these aspects.

First, the “Practically Irrigable Acreage,” or, PIA, standard was established to help quantify how much water each reservation would receive. The standard assumes that any with a potential to grow crops if it was irrigated (e.g., not on a steep mountain or in a developed area), counted towards the quantified water. The five reservations who explicitly had their rights quantified, reserved about a million acre-feet of water for about 135,000 irrigable acres.

Especially on large reservations, such as the Navajo Reservation, the PIA standard can lead to a hefty sum of water. While not in the Colorado River Basin, a recent example is the Wind River Reservation in Wyoming, who recently had over 500,000 acre-feet of water rights quantified. To put that amount in perspective, the state of Nevada is only allocated 300,000 acre-feet a year from the Colorado River!

Recall the necessity of having a “beneficial use” in order to obtain a water right. The amount quantified is tied to the primary purpose of the reservation – which is often to “serve as a homeland,” and may sometimes explicitly address fishing or agriculture. In other words, if agriculture is a primary purpose of the reservation, more water will likely be allocated via the PIA standard.

This brings us to a second major interpretation of Arizona v. California. Even though the quantification of water rights is based on use, tribes have, with only a few exceptions, been able to use their quantified water as they see fit. For example, tribes may decide to leave water in a river for fishing rather than divert it to additional agriculture, and that is permissible by precedent.

Another unanswered legal question however, is the right for tribes to sell their quantified water, in particular undeveloped water, to non-tribal members for compensation. Any novice water policy wonk in the Colorado River Basin should pay attention to this, as it is only a matter of time before it becomes a necessary conversation.

How much water are tribes actually using? 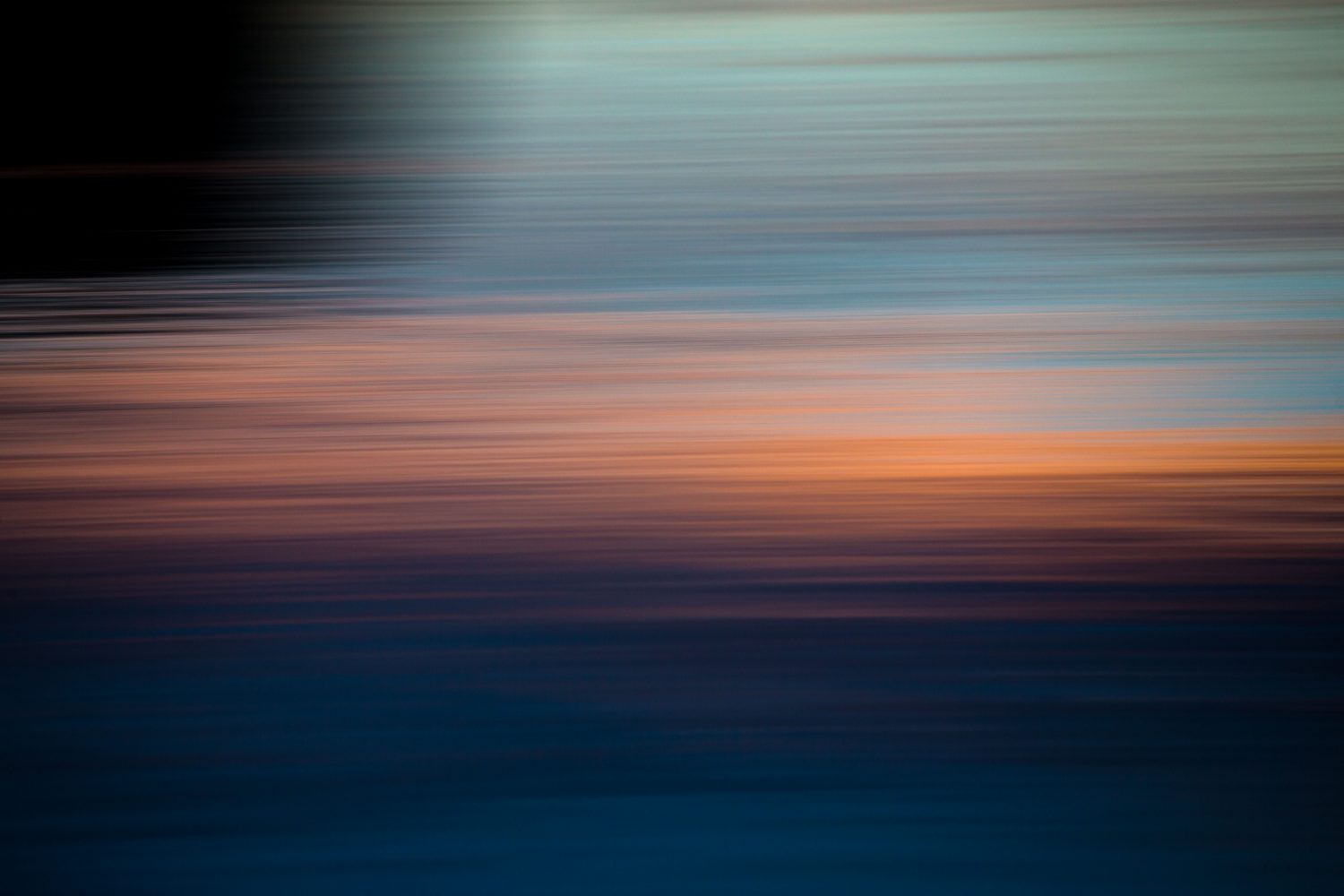 Less-than-diligent is the kindest way to describe the urgency in which the federal government has addressed tribal water rights. Only five tribes have quantified water rights, and another 14 have undergone settlements to have water quantified. Side note – negotiated settlements are often more attractive than litigation for tribes, even though they generally include less “wet” water. This is because they are most often less expensive, take less time, and sometimes involve money to actually develop water.

In December 2018, the Bureau of Reclamation and the Ten Tribes Partnership came out with the Colorado River Basin Ten Tribes Partnership Tribal Water Study. It states that collectively all 29 federally recognized tribes in the Colorado River Basin have rights to 2.8 million-acre-feet each year. This is a massive amount of water – the same amount as the state of Arizona. As these rights continue to be quantified, it will come out of each state’s water allocation – leading to a tricky situation for water managers on an already over-allocated system.

One conclusion reached from the study is: “none of the Partnership Tribes currently has the basic infrastructure or legal and administrative flexibility to fully use or realize the full economic value of its reserved water rights,” despite 50 years of time since Arizona v. California. Many tribes also face water insecurities, despite having some of the most theoretically senior rights in the basin.

Most fundamentally, this highlights how little support tribes receive from the federal government and the states. The first massive irony that comes to mind, is the state of Utah pushing for the Lake Powell Pipeline to bring water to St. George, a predominantly affluent white community, whose current water consumption rates are among the highest in the country. States should instead be working with tribes to quantify and best utilize their water rights. 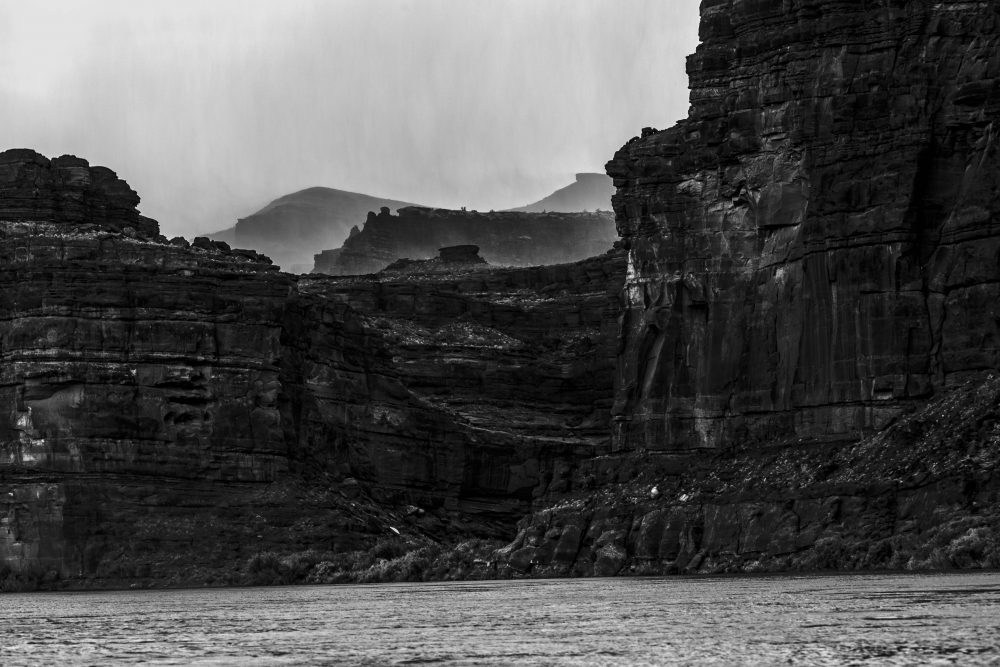 Systematic injustice is at the root of the situation we are in now, but perhaps continuing to work with all stakeholders in the Colorado River Basin will lead to policy changes that actually benefit the tribes.

Specific obstacles that need to be overcome include the uncertainty of off-reservation water transfers, jurisdictional issues within multi-state or basin reservation boundaries, poor comprehensive water development and planning resources for tribes, and the glacial pace that tribal water rights are quantified.

Education about tribal water rights is the first step to beginning to resolve tribal claims, which could lead to less conflict and more collaboration. Providing an economic benefit, and bringing tribes into the conversation of water in the Colorado River Basin in a meaningful way. The Tribal Study highlights this optimism:

“The Partnership Tribes are also hopeful that the Tribal Water Study will provide an opportunity for them to be included in regional water planning in order to facilitate tribal water development, minimize conflict, and improve overall reliability of the Colorado River System.”

Sharing this topic with friends, or writing a letter to your representatives, may begin to give this injustice the attention and action it needs. Everyone in this country needs water, and we can all could learn something from Indigenous peoples such as Howard.