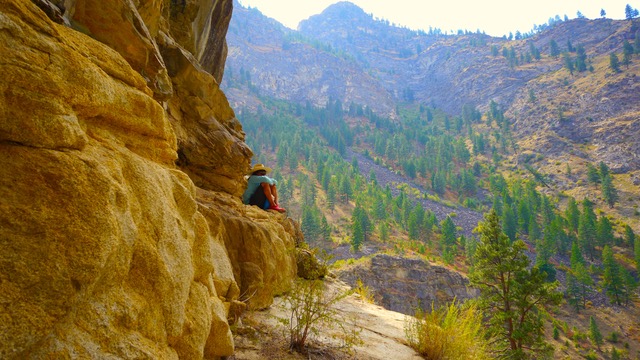 The Last Mountain Man of the West

“When you kill a deer, the first meal should be a great fried meal of brains, one kidney, liver, heart, sweet bread, and any other odds and ends you might want to eat there. And if you are like me and need a little vitamins or medicine of some kind, it’s in there, and you always feel better after a meal or two like that.” 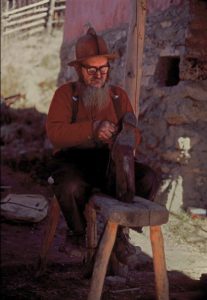 That’s Buckskin Bill. He was explaining his philosophy on hunting and eating to some curious documentary filmmakers who had traveled more than 50 rough miles down the Salmon River to interview him on his plot in Five Mile Bar. Bill had been living in his rugged, isolated home for more than forty years at that point.

Bill and his father originally purchased the fifty acres on the Salmon River in 1932 for the one, single American dollar. It was a dollar well-spent, as Bill would go on to live off of that same land until his death in 1980. By the time of his death, Bill had created a veritable village on the riverbank, including a bomb shelter, a turret, a two-story house, and a blacksmith shop. Besides some metals, gunpowder, nails, and his favorite Darjeeling tea, almost everything was foraged from the surrounding land.

“I don’t complain about anything,” he said, “but if you had the choice between a flintlock rifle and lots of game, and a lot of modern technology, I would take the older type you see, and take my chances.” It was this kind of hearty luddite resourcefulness that people refer to when they call Buckskin Bill the last of the mountain men. But it’s a label that I can’t quite accept. I have borne witness to enough unmasked heroes to be skeptical of such valorization.

I remember vividly the moment that my childhood friend told me that his grandmother was friends with Ed Abby and used to run rivers with him. “She said he was a jerk. And he threw his empty beer cans into the river!” he told me. Perhaps this information shouldn’t have been so shocking to me, but it upended a mythology that I had held: that Ed Abby could do no wrong. So I have to wonder, how much of Bill’s legend is real, and how much is projected nostalgia, a too-perfect character for an idealized, mythological past where everything was ‘simpler’ and more ‘rugged’?

In a recent New Yorker article, author Kathryn Shulz takes to task the most venerated of the old, curmudgeonly wilderness men: Henry Thoreau. Shulz finds in his abstinence a puritanism that is not so much heroic as it is narcissistic. About his refusal to have even a doormat in his shack at Walden, she writes, “I am not aware of any theology which holds that the road to Hell is paved with doormats, but Thoreau, in fine Puritan fashion, saw the beginnings of evil everywhere.” 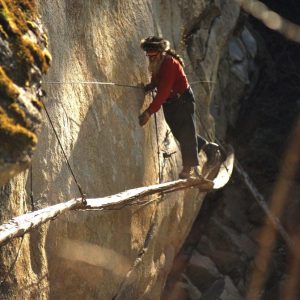 At what point does someone like Buckskin Bill move over that line between being a purist and being simply puritanical? Shulz suggests that, “Like today’s preppers, [Thoreau] valued self-sufficiency for reasons that were simultaneously self-aggrandizing and suspicious: he did not believe that he needed anything from other people, and he did not trust other people to provide it.” Buckskin Bill, too, was famously suspicious of help from the government or anyone else. But did he not inherit that land from his father (even if it was bought for such a low price?), and did he not have a college education from a prestigious liberal arts college (McPherson College)? Is there not always help, whether we allow ourselves to see it or not?

Still: there is something to be said about that tug towards the raw, isolated, even dangerous encounter with the wilderness. I feel it with every change of season, this desire to rush towards the coming weather, experience it fully on a lonesome backpacking trip. I can’t help the creeping butterflies of nostalgia and the fever of shame about my own era that comes when I hear Buckskin Bill speak about the old days. He says, “We had packers and miners and old timers and their attitude to towards life was in adjusting towards their surroundings… now when a person comes here he brings Los Angeles with him. He brings New York with him.” Like Bill, I mourne what has been lost with time.

But I don’t want to fetishize the past, to pretend that the era of ‘mountain men’ was the pinnacle of human inventiveness and that the only way to improve is to go back. Such ideas ignore the vast web of human interconnectedness, the hard truth that there is not enough land, enough resources, enough knowledge for us to live like Bill again. Perhaps more importantly, such nostalgia ignores the fact that Bill, while perhaps the last mountain man on the river, was not the last mountain person there. 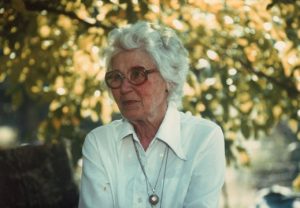 Frances Wisner also lived down the Salmon River. She lived even further away from civilization than Buckskin Bill. So far away that she received mail and occasional essentials by airplane twice a month.

“Once I reached maturity I started looking for a mountain,” is how she begins her story. It was 1940, and she rode around the Idaho wilderness by horseback until she came upon one ridge by the Salmon River that had a small ranch on it. “I stopped my horse and I looked. To me, it’s the most beautiful place in the world. I said, well you don’t know how you are going to do it Francis, but you are going to drive a nail in the wall of that house and hang your toothbrush on it, and you are through traveling.”

She ended up marrying the man who owned the place, and continued to live there long after he died. As she explained to an interviewer, “you can have anything you want here, all it costs you is labor. And if you bother to learn how, you can even have it with your own labor. I don’t give a damn if I never go nowhere again.” 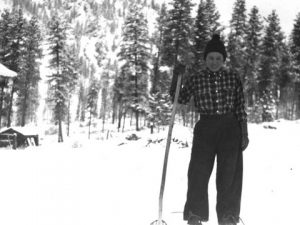 I don’t know about you, but that sounds like some classic, gruff, mountain person talk to me.

In challenging his mythology, I don’t mean to deride Buckskin Bill’s brilliance. The detailed carvings on his homemade guns are utterly outstanding, his green thumb is enough to strike envy into the hearts of all gardeners. He was resourceful, charismatic, uniquely skilled. But, we risk losing important details, and even whole characters like Frances, when we too quickly laude a ‘great’ and ‘bygone’ era. It is this sort of mythologization of people that makes us forget that Thoreau actually had his mother help him with cooking and laundry, and that he lived just a short jaunt away from a road, a railroad, and even his childhood home. We owe our heroes more complicated lives, more human standards; we all need help, and that isn’t a bad thing.

I hope that in the future, when humans have kicked the strip miners off the mountains and the frackers off the plains, when we decide to live in a better symbiosis with the earth and other species, that we will see ourselves as deeply connected beings and not isolated, ‘pure’ mountaineers. I hope that our memories of people like Buckskin Bill and Frances Wisner focus on their dependence on a whole ecology of relations: with the mountain, the river, and yes, even with other human beings.

To visit these and other old homesteads where myth meets history, join us on the Main Salmon River! 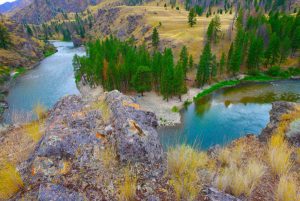