Insider’s Guide to Floating the Green River through Labyrinth Canyon 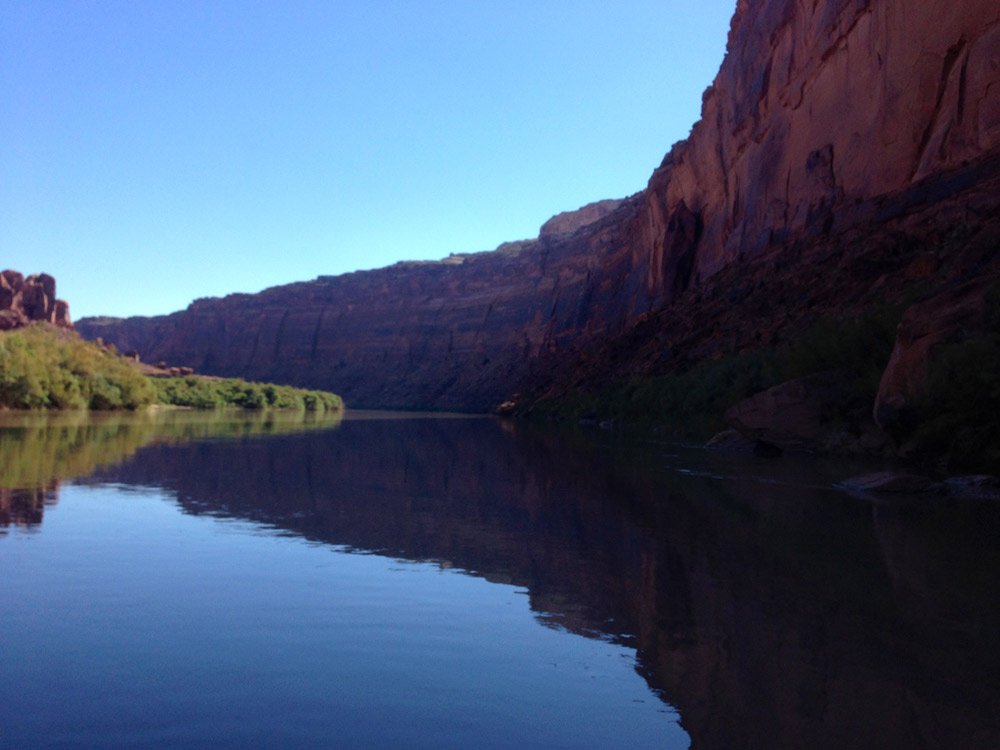 Utah’s Green River through Labyrinth Canyon is the ultimate in relaxing river trips. Smooth orange walls encase a tranquil, lush river corridor, studded with sandbars and enchanting side canyons. There are no rapids on this trip, and that is exactly why it’s so good. The scenery is the main attraction; the calm and quiet are the main event. The river carries you softly through a landscape that grows more beautiful around each bend, leaving you free to stare, marvel, wonder, and absorb. This is a rare trip, well-worth doing. Talk to Holiday about spending five days in Labyrinth Canyon and discover why sometimes it’s better to skip the rapids. 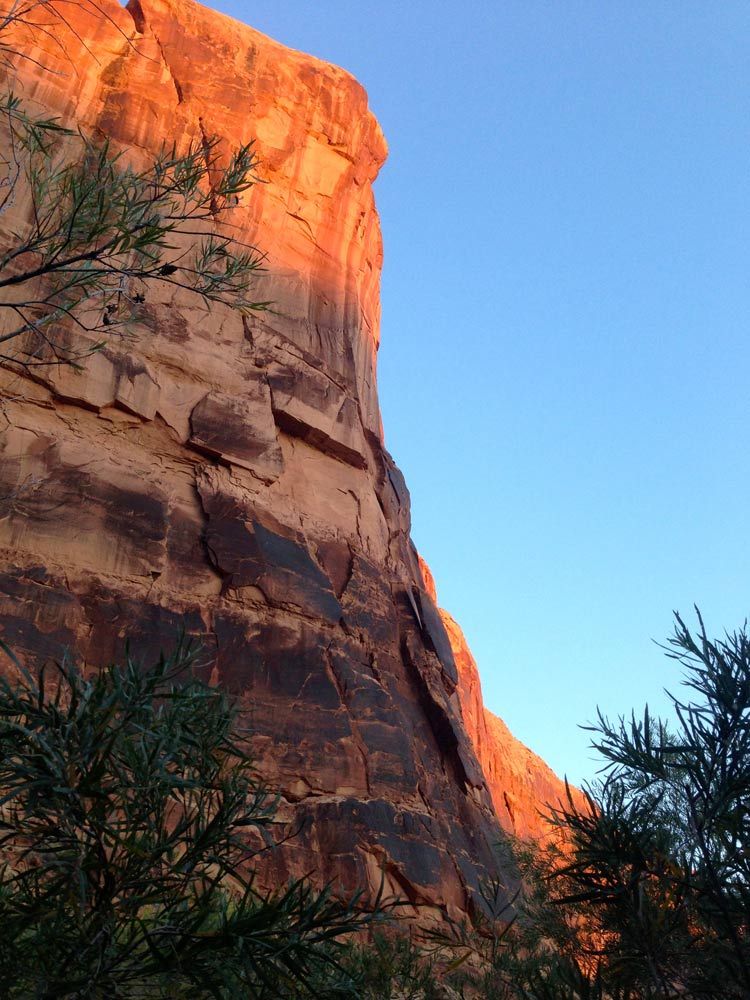 There are two places this trip could begin. The longer option starts from the Green River State Park and lets you float under Interstate 70 and the Denver and Rio Grande Railroad bridge. Spend a day winding through the eerie badlands of the Green River Desert, a purple and gray prelude to Labyrinth itself. Or, launch 24 river miles downstream at Ruby Ranch, where buff- and gold-colored sandstone rises out of the river. Wherever you begin, the river is calm and smooth. This is a trip for people who relish the idea of having no schedule, nowhere to be, and nothing to do except float, hike, and contemplate the continually unfolding majesty of time-worn sandstone. Swim alongside the rafts, dragging your toes along the sandy bottom, or explore along the edges of the river on a stand-up paddleboard. There’s history everywhere along the banks. Ranchers, homesteaders, and miners carved rough lives out of this canyon, and left behind their cabins, hand-hewn roads, and equipment. Early river runners carved their names in the walls alongside much older indigenous rock art. More than history, however, there is nature. Groves of cottonwood trees and Gambel’s oak mix with willows and tamarisk along the shoreline. Birds riot through this thick riparian vegetation. Great blue herons, peregrine falcons, beavers, big horn sheep, and deer all inhabit this corridor. Several side canyons have perennial streams, complete with minnows, crayfish, and cattails. And above all of this are the canyon walls, which grow ever higher as you move downstream. Smooth, unbroken slopes transition into blocky cliffs, with pillars and pinnacles jutting out beneath the pale domes of the uppermost rock layers. Far from any source of light pollution, Labyrinth lies beneath some of Utah’s darkest skies, making it an ideal place to view the cosmos.

It isn’t always about whitewater. A river trip is about so much more than adrenaline. No other Utah river trip offers such simplicity and grandeur at the same time as Labyrinth Canyon, without even a single riffle to interrupt.

The first line of Holiday’s mission statement is worth noting: Holiday River Expeditions’ goal is to preserve our nation’s wild lands. It’s not just about money, or providing the most fun river trip possible. It’s bigger than that. We recognize that our business couldn’t exist without these wild lands, and beyond that, we believe strongly that wild places are critical, not only for the health of our planet, but for the health and well-being of our species.

In March 2019, Labyrinth Canyon was given official status as a protected wilderness area—or at least, the west side of it was—as part of the Emery County Lands Bill, an omnibus public lands package that sought to strike a compromise between advocates for wilderness and advocates for more access and development. Holiday celebrates the permanent protection of the western side of the Green River through Labyrinth. But in keeping with our mission, we’ll continue to advocate for thoughtful, far-sighted land management strategies: in Labyrinth, and anywhere else we see the need to speak and act on behalf of our nation’s wild lands. 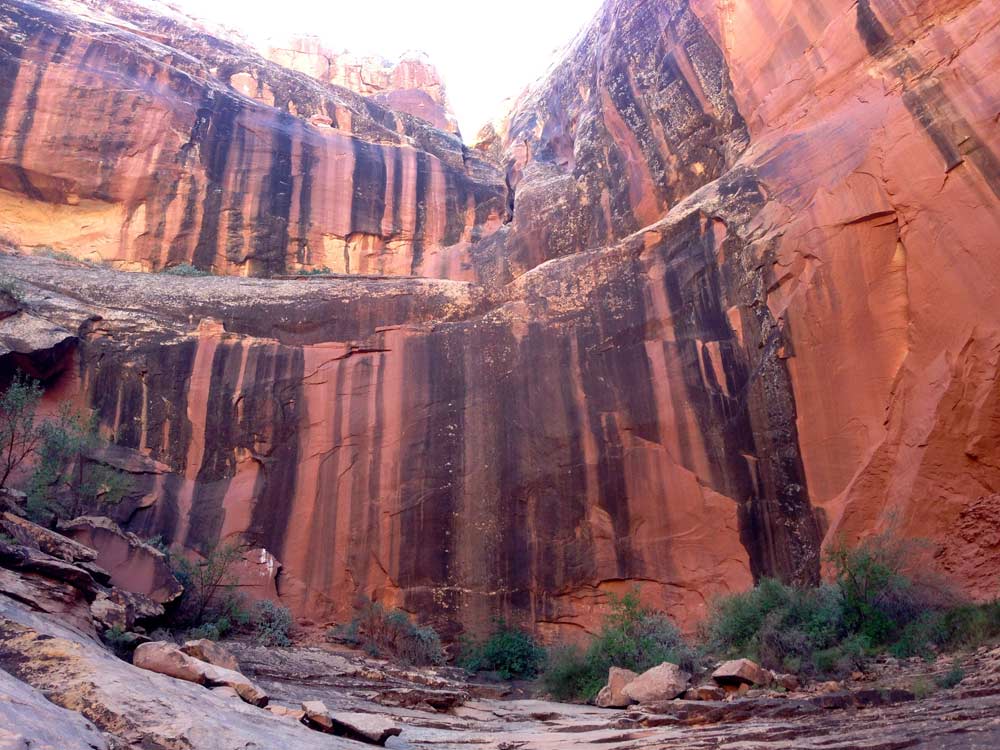 Meet in the town of Green River, Utah. Hop in the vans for the quick, three-minute ride to the Green River State Park or take the longer but more scenic trip down Floy Wash to Ruby Ranch. Wherever we start, the river wanders mostly southwest, taking time to enjoy the view on its way toward Canyonlands National Park. We’ll take out just before the national park boundary at Mineral Bottom. The drive out of the canyon may be the most adrenaline-producing part of the trip, along a road literally carved out of the side of a cliff! Once we reach the rim of the canyon, it’s a two-hour drive back to Green River, skirting north and west around the deep chasm through which we’ve just been floating.

Major John Wesley Powell gets the credit for being the first white man to travel the length of Labyrinth Canyon, as well as Desolation and Gray canyons above, and Stillwater and Cataract canyons below. A one-armed civil war veteran, he named Labyrinth and many of its side canyons and features in 1869 as part of a larger trip that explored and mapped the Green and Colorado rivers from Green River, Wyoming, through the Grand Canyon.

Denis Julien, however, was a French-Canadian fur trapper who traveled along the Green River in the 1830s and left his name on rock walls as far north as the Uinta Mountains and as far south as lower Cataract Canyon. It’s unclear whether Julien floated through Labyrinth Canyon by boat, although some of his mountain man contemporaries were using round “buffalo boats” to navigate the upper Green River. 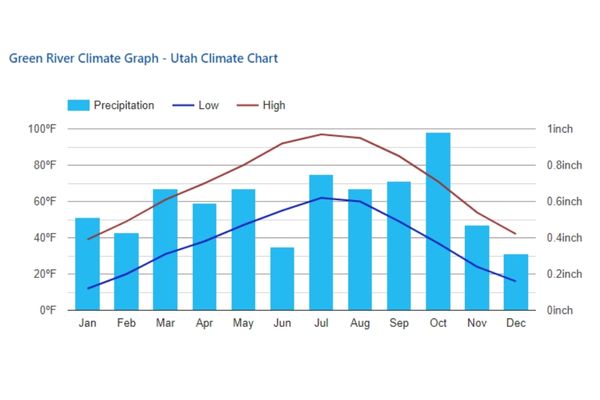 In Labyrinth Canyon, as well as on every other section of river that we run, Holiday uses oar-powered rafts. These are 18-foot inflatable boats rigged with wooden frames and 10-foot oars that a single guide uses to steer and row. There’s plenty of room for both gear and passengers—our rafts are custom-built to the specifications that Dee Holladay and generations of boatmen perfected for maximum efficiency and comfort.

We’ll also bring an inflatable kayak or two, as well as one or two stand-up paddle boards, depending on the group size and what people are interested in using. These are smaller, personal watercraft that let you do your own exploring, get a little exercise, and enjoy some solitude throughout the day.

What we don’t bring are motors. Holiday doesn’t use motors on any of the sections of river that we run, but in Labyrinth, a motor seems especially out of place. The canyon walls and the slow-moving river are a natural cathedral, a place that seems to demand quiet reverence and contemplation. And although the river moves slowly, there’s really nowhere else we need to be. Each mile of the river offers something marvelous, something spectacular, something worth seeing. In Labyrinth Canyon (and really, everywhere we float) the whole point is to go with the flow.