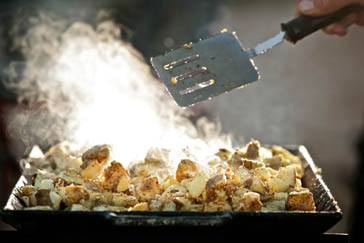 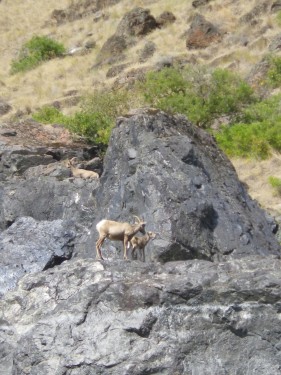 Often when I’m traveling and I tell somebody that I live in Idaho, I’m asked, “Idaho! Like the potatoes? “

Everybody knows about Idaho’s potatoes and they should. The Gem State (as Idaho’s otherwise known) is the nation’s number one producer of potatoes with 29 percent of the total crop. So how many potato fields will you see while floating on the Main Fork of the Salmon, the answer is: none.

Even though Idaho and the potato are conjoined like Los Angeles and smog, Florida and retirees or Wyoming and wind, the entire state does not grow potatoes. Idaho’s potato region is in the south where flat, volcanic soils combine with perfect growing conditions to make prime spud country (by the way, potatoes are native to the Americas). Just north of potato country, a sharp line of mountains jut up from the horizontal plane to form some of the most rugged country on earth. Those mountains continue north for 250 miles.

And the Salmon River cuts right through the middle of it.

At certain points, the river is 6,000 feet lower than the surrounding hillsides. Those hillsides are home to megafauna such as bighorn sheep, elk, moose, wolves, black bears and mountain lions. It is primitive country that would look familiar to Lewis and Clark who scouted the canyon more than 200 years ago.    Lewis and Clark never made it to southern Idaho. Instead, those lands were explored by French fur trappers who wouldn’t recognize the land today. It’s been transformed from an empty sagebrush plain, occupied by Shoshone Indians into a land that produces $670 million of potatoes and 15 percent of the state’s income every year. The trappers wouldn’t recognize the cities that have sprung up in southern Idaho either: Boise, Meridian, Eagle, Nampa – each one owes part of its existence to the potato.

Yet just to the north, where the wild things still roam, a vast wilderness remains in its primordial state.

That’s why when I’m asked, “Idaho! Like the potatoes?”

My answer is “yes” and more importantly, “no.”