HRE Alumni; Where are they now with Kevin White 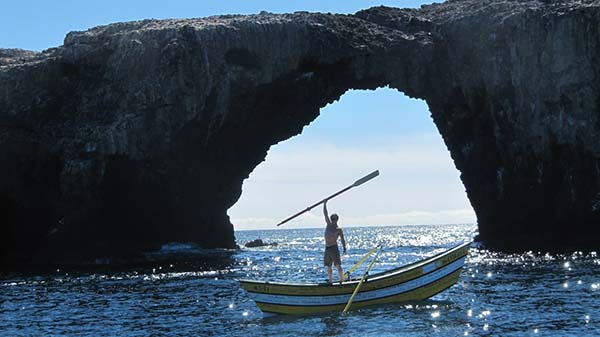 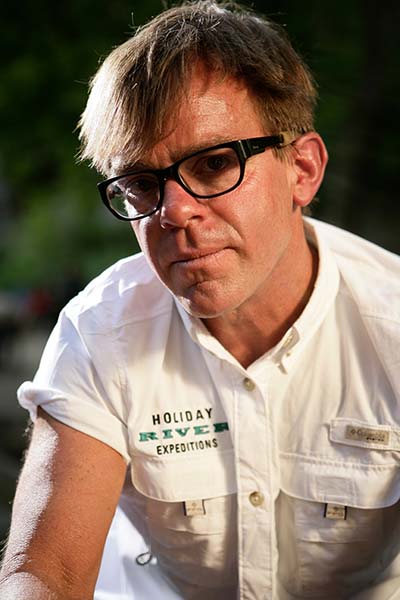 How did you find yourself at Holiday River Expeditions?

I was in a guitar class at Pierce College. I started dating Chrissy Bloome and she had already made plans to do a river trip with her workmates. When she returned she told me that I should be a river guide. I made the training trip and was hired from that trip. I credit Win Thomas for being his pick of the bunch and as I see it now, he saved my life. At the time, I really didn’t have much focus or direction, and as it turns out, the river life became my life and still is, really.

What years did you spend guiding?

My first season was in the summer of 1981.  It was a low water year and I was under the tutelage of Greg?  We did many back-to-back Desolation Canyon trips and that cemented my love for guiding.

What is something you learned while at Holiday that has stuck with you and has been valuable to life beyond the river?

I really hadn’t had the opportunity to interact with the public in a general way. Learning about the history, geology, and how the river business worked gave me a path to socializing with people from all walks of life. Usually, we began our trips with a common interest in the canyons and rivers and had the opportunity to share an experience and build rapport from there. I also learned teamwork and Dee and Sue instilled their passion for the canyons and guiding that is still with me today. The passion and love that was passed on to me I passed on to my daughters. Both love to row boats on the river and Tuesde worked for Holiday as well.

What is your favorite stretch of river that you have been on? 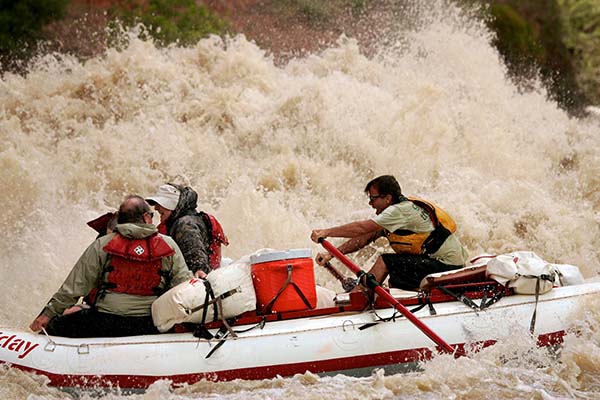 This is a tough one. There are so many to choose from, and for different reasons. Beauty; The confluence of the Green and Yampa in Echo Park, the entrance into Whirlpool Canyon, The Gates of Lodore, The deepest section of Desolation Canyon,

For excitement; The Big Drops, Hell’s Half Mile, Warm Springs

Peace and quiet; The first 4 or 5 days of Cataract Canyon/low water/Colorado side; the Green side of Cat, anytime

Overall; All of the Yampa, anytime, anyway!

Do you still do river trips?

After Guiding from 1981 to 1987 and before my run from 2009 to 2012, my family and friends have done many private trips on the Snake through Hell’s Canyon, the Main and Lower Salmon, the Middle Fork of the Salmon, Rogue, Grande Ronde, John Day, San Juan, Grand Canyon, Cataract, Desolation, Gates of  Lodore.

Here’s the thing though. I met my wife Katherine a year after my last season guiding, 1987, as I decided to pursue a career in teaching. She had never experienced river running and in the summer of 89, we went on our honeymoon and did a Lodore and Westwater trip back to back. She was 7 months pregnant and a total badass for trusting me. River running was still fresh in my heart and I wanted and hoped she would love it as much as I did. And, she loved it. 5 years later in 1994, we did a Holiday “Gala” with John and Jan, Mitch and Page, Bret and Cory, and all our kids. Then a few years later, “Gala 2”, on my 40th I owe a lot to Katherine for making it a priority in our family’s life over the years and all of my river friends are now our family friends. And, we can’t wait to do our next trip.

What do you miss most from guiding? 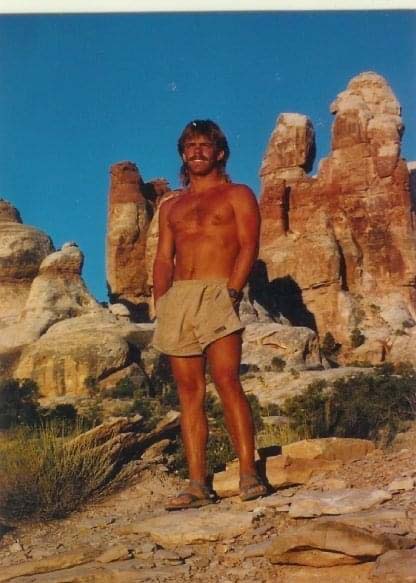 What advice or sentiment would you share with young guides working today?

Keep a detailed journal about your experiences and trips.  Document who the TL was, guides, water level, weather, and guests that stand out; positive and negative.  Trust me, there will come a time when you are reflecting about a trip you did, who was the front or rear oar, what water level, how many times you rowed cat over 74,000 cfs so when you are questioned about how many times you went left of Canyonlands Rock, you have no doubts.  Twice!

Do you have a favorite memory of Dee? Sue? Tim?

Dee; One arm pull-ups; he won, giving me the name; KW, telling jokes around the fire at 10 Cent, chats in the outdoor shower about how much avocado should go in the salad; if any, visiting me in Ojai.

Sue; her outpouring of love, the care, and joy that went into the menu, her meeting my mom and how similar they are, her beautiful laugh and smile, her love for her family and her Holiday kids; us.

Tim; teaching me through example of how to be a great guide and TL, A great example of work ethics. Swing Low Sweet Chariot, Skiing too fast, Back when we could have fires, flame jumping, Front oar technique, what I appreciate most from Tim is that I believe he saw potential in me and helped me realize it.  He was patient.

What’s your most memorable story from a river trip? 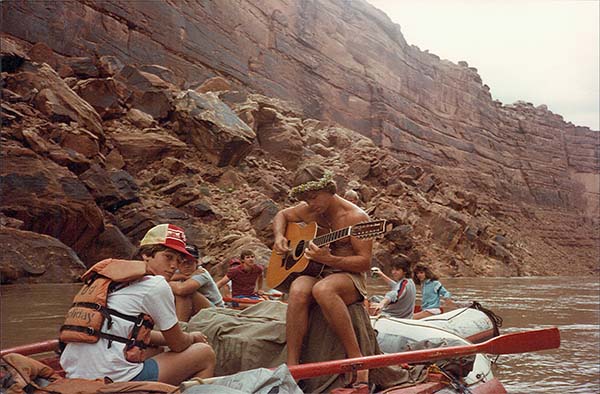 My 30th Bday trip in Cat. It was just pure magic. A highlight of my life to this day. Rowing my dory, solo, through Cat with 10-year old, Tuesde, 16-year-old Tristyne, and my wife, Katherine.

Catching a Pygmy Rattler in camp on the green side, releasing it in the river the next morning, then getting in trouble for it after the trip.

Any highwater trip that ended successfully at Ten Cent and the celebration that ensued.

Trips with my Mom, Dad, and family and friends.

Are you in touch with any guides you met during your time with Holiday? 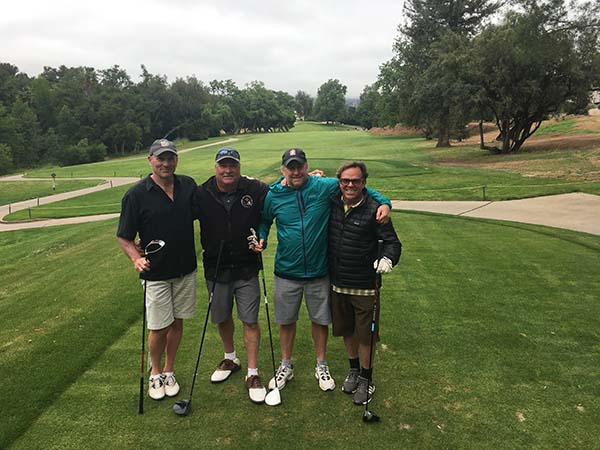 Yes! Win and Deanne Thomas and family. Even though we live so far apart, we see each other a few times a year and have done a few private trips together. I recently had the honor of being his daughter Georgia and husband Zach’s wedding officiant.

Bret and Corry Jameson and their kids have always been a part of my life since the 80s. We just had a reunion of sorts in August where a few of us met for Win and Deanne’s 40th wedding anniversary.

Garth Pintler and Martha Betcher have been in our lives since then too.  We have done many trips together on the river and in the mountains.

John Feder and I didn’t work together but through Win and Garth, I have gotten to know him and the common bond we have through Holiday and our common friends has blossomed into a great friendship.

John and Jan Wood and our families have been together since the beginning as well.  We have done many trips together both on and off the river, and our friends become their friends as great friends do.

Vic Rickman and I have been buddies since the 80s as well.  He never really guided but like I say, a constant Holiday moniker is, “mi amigio, tu amigo”

Kerry and Tammy Jones and their kids have always been in my heart as well.  Our trip together on the Yampa continued the life adventure we all share together.  Their son Topher lived with us for a couple of summers as well.

Rob Judd and his family are life friends and we have had some fun over the years.

I’ve been in touch and reunited with Sherpa.  He was and still is an influential friend in my life.

It was great to guide again and Tim, Kelly, and Kerry were still at it and leading the way after all those years.  I made a whole new set of friends and they were as warm and welcoming and influential as ever. Brin, Matt Chick, Chet,(who I officiated his wedding) a new kid on the block, Susan Monroe, Dave Snee, Molly, Pat, Ben, Colin, Justin, Erika Bash, Lauren W, Jessica D, Sandy, Jesse K, Josh, TBird, Em, Sarah, Zack C., and Doug G.  Doug summed it up for me one season.  We got to know each other, along with Jesse and Kerry, on a Bachelor party down Lodore, I think.  A while later in the season, a group of guides had a couple of days off and they were planning a trip to Goblin Valley for the night.  They were getting ready to leave and Susan came to me and asked me if I wanted to join them.  I told her I appreciated the invite but I wasn’t sure they wanted an old guy to join them and I don’t want to impose.  She pried a little more then politely accepted my decline.  A few minutes later, Doug wandered over to me and asked me if I wanted to join them.  I said, “Oh that’s so nice, but you don’t want an old guy hanging around!”  He said, “But that’s not how we feel about you.  You’re like one of us, but from the 80s!”  I laughed so hard and after that, how could I have refused? It was a highlight experience, hiking, caving, camping, and singing.  I was so impressed and he was right, I was one of them.

That’s the thing, and I  have a strong suspicion that most would agree, there is a special bond and even if we don’t see each other for a while, when we are together, it’s as if no time passed between.  Friends forever.  That’s the principle takeaway for me.

Here’s another thing, and life has its small degrees of separation.  In 2007, JW and I combined on a GC river permit.  An invite on JW’s side ended up being my present-day Son-in-law’s Father, Steve Carothers.  So many threads and connections we’ve made through the Holiday family are still having positive impacts on our lives. 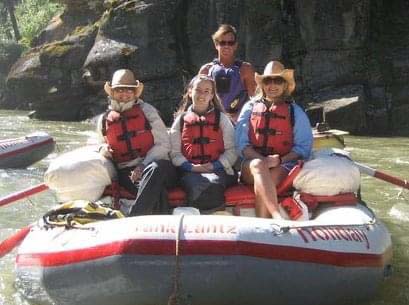 What are you up to these days?

I have been retired from a 30-year teaching career for four years and now work as a woodworker building anything from muddlers to whitewater dories. I am currently creating wood projects for Amber Interiors. I am a very proud father of two beautiful and successful daughters and for the last 4 years a loving grandpa/pupa and soon to be for the second time in February. I play golf a couple of times a month, ride my bike in the local mountains, and take our Ranger Tug on trips to the islands and deltas in Cali. Katherine and I have embarked on a construction project and we are building a cabin from scratch in the local mountains in a place called Pine Mountain Club.

Where do you call home?

We have been in the same home, in Ojai, California since 1994.

Do you think you will ever be a river guide again?

Probably not professionally, but I will be on the river again soon privately.