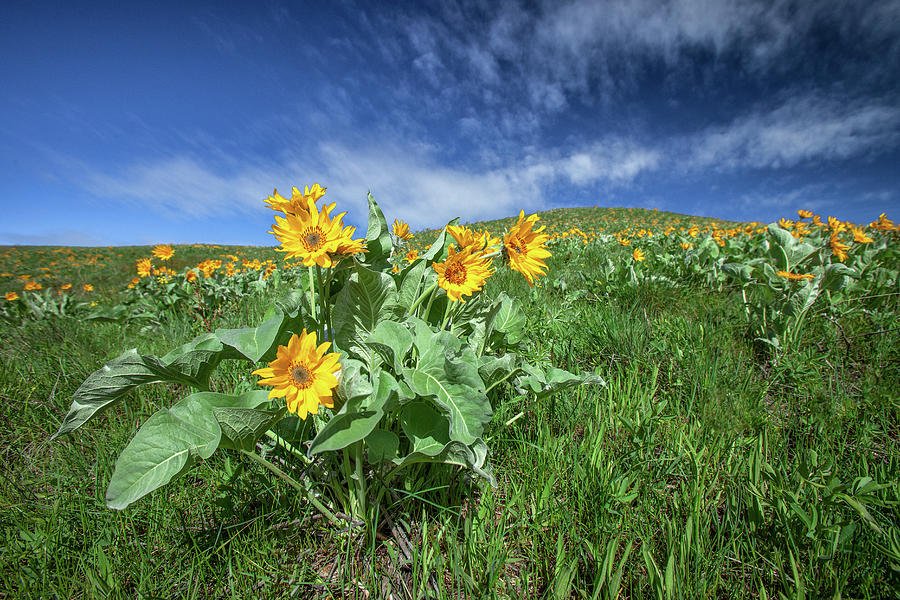 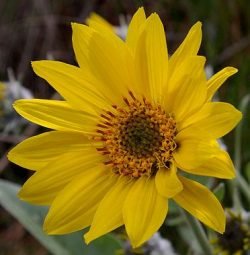 From May to July, as you drive along to the river put in, you often see large patches of a bright, showy yellow flower that adds color to the dull greens of Low sagebrush, greasewood, Mormon Tea and cheatgrass.  The flower looks like a sunflower with yellow ray flowers.

The plant’s Latin name corresponds with its common name that well describes the plant. Arrowleaf balsamroot, a plant of the sunflower family is common in cold, dry areas of the West.

The leaves are arrow shaped, meaning that the blades are triangular and pointed.  The leaf blades are fuzzy, especially on the top side.  A large, deep, thick taproot completes the name, having a diameter the width of a hand and a branching root going some feet deep. The thicker portions are covered with bark. The balsam portion of the name refers to a resin in the root. 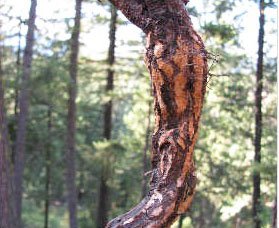 Nearly all parts of this plant were used as food by various People of the First Nations.  The roots could be baked or steamed and eaten, as well as the young shoots. The peeled roots have a bitter, strongly pine-scented sap. When cooked for several days (roasted or steamed) the root became edible and was often ground into meal and mixed with grease and made into cakes, or mixed with powdered berries and eaten.  The immature flower stems were peeled and eaten.  Balsamroot seeds are nutritious and oil-rich, another good source of food.  Ripe seeds were pounded into flour. It was also used medicinally.  Cheyenne People boiled roots, stems, and leaves, and drank the decoction for stomach pains and headaches; they also steamed the plant and inhaled the vapors for the same purposes.  The leaves were used as a poultice for burns, the roots boiled and the solution applied as a salve for wounds, cuts and bruises, and a tea derived from the roots used as a treatment for tuberculosis and whooping cough. Today, it is added to muffins, breads and granola, and can also serve as an emergency survival food. Modern herbal practitioners may use the root as an expectorant.  Early newcomers discovered the root could be used as a coffee substitute.

On July 7, 1806 on their return from the Pacific Ocean, Captain Lewis and his group of nine men followed the Nez Perce trail up the Blackfoot River to today’s Alice Creek, east of Lincoln, Montana. Along their travel Lewis collected arrow-leaf balsamroot and several other plant species. Today the specimens collected by the explorers are in the Lewis & Clark Herbarium in Philadelphia. 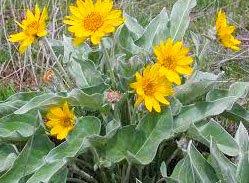 Arrowleaf balsamroot provides good forage for sheep and big game, and fair for cattle. The flowers are especially palatable, but all portions of the plant except the coarser stalks are eaten.  Balsamroot is most palatable in the spring and summer, but wildlife will graze it throughout the winter. Rocky Mountain mule deer utilize arrow-leaf balsamroot year-round and the plant is considered an important food in all seasons. Elk in the Rocky Mountain region use the plant as food in spring, summer and winter. Seeds of arrow-leaf balsamroot are consumed by small mammals such as ground squirrels, which also utilize the leaves. In a study of flammulated owl habitat showed that owls were with dry-site indicator species such as arrow-leaf balsamroot.  Horses are especially fond of the flowers.  Arrowleaf balsamroot will increase when grazed by cattle, but decrease when grazed by sheep or deer on winter ranges.

Arrowleaf balsamroot is found in open, fairly dry situations such as southerly exposures throughout the Sagebrush Empire.  It is usually found at elevations from 4500 to 7000 feet. It is strongly drought resistant, has good winter-hardiness, and is strongly tolerant of grazing and trampling. 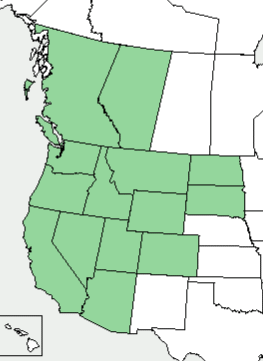 Because of its showy flowers and dominance on the landscape, Arrowleaf balsamroot is commonly used in restoration seedings. The species is believed to have potential for use in oil shale, roadside and mining restoration practices.